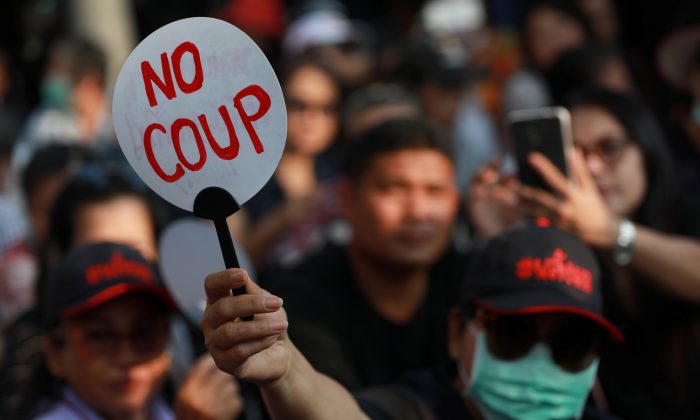 BANGKOK—Around four hundred people gathered at a monument to democracy in the Thai capital on Saturday Feb. 10 to urge the military government not to delay a national election planned later this year.

Elections to restore democracy have been postponed several times with November being the latest date set by Prime Minister Prayuth Chan-ocha, who was appointed by a military-backed legislature following a coup in 2014.

But a change in the election law by parliament last month means the date almost definitely will be pushed back to early 2019, something that has fanned growing discontent among groups who are calling for a swift return to civilian rule.

Authorities deployed fences around the Democracy Monument, forcing activists to gather only in the vicinity. Protesters held mock ballot boxes and signs saying: “Disgusted with dictatorship.”

“The NCPO should hold elections in November 2018, not move it to February 2019,” a representative for the demonstration who goes by his Facebook name of Sasiphat Siri told the crowd.

The junta is formally known as the National Council for Peace and Order (NCPO).

“Mr. Prayuth, can you hear the people’s voices?” shouted another protestor.

On Friday, police issued arrest warrants for four activists. One was arrested on Saturday morning, while the other three showed up at the protest on Saturday.

Small anti-junta, pro-election protests that began earlier this year have gained momentum in recent weeks with a variety of activities staged by different groups every week. However, these have been mostly confined to the capital.

Earlier this week, the Puea Thai Party whose government was ousted in the 2014 coup, issued a statement defending the right of various groups to express their opinions peacefully.

“Peaceful expression is the right of every citizen … I strongly disagree with the actions of the police and those in power to try to impose … charges against the groups,” Phumtham Wechayachai, the party’s secretary-general, said in an open letter on Monday.

Political parties of all stripes have been urging the junta for months to lift a ban on campaigning and allow them to prepare for the general election.

But senior government figures have said the time was not yet right to lift the ban, prompting criticism from rights groups and politicians that the junta wants to delay the vote and prolong its time in power.

Parliament voted last month to extend the start date for a new election law by 90 days. The bill lays out rules for lower house elections and is one of four bills that need to take effect before the vote.

The enactment date is critical in determining the election date as Thailand’s new constitution requires polls to take place within 150 days after electoral laws take effect.

On Thursday, 35 Thai activists reported to police after they staged an anti-junta protest last month in downtown Bangkok.