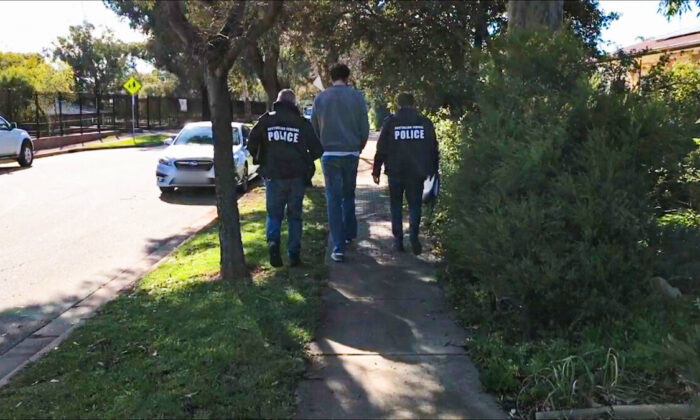 In this undated photo, the Australian Federal Police (AFP) make an arrest for Operation Molto in the suburb of Ingle Farm in Adelaide, Australia. (AFP)
Australia

A two-year international operation led by New Zealand that identified over 90,000 online accounts that possessed or traded child sexual abuse material was finalised on March 2, arresting hundreds of offenders and rescuing children from harm.

Across the duration of the operation, authorities arrested 450 offenders in the United Kingdom, 117 in Australia, 46 in New Zealand as well as others from around the world.

The multinational law enforcement effort also safeguarded 153 children, including; 79 in the United Kingdom, 51 children in Australia, 12 in Canada, six in New Zealand, four in the United States and one child in Europe.

A service provider had informed the DIA that tens of thousands of offenders were using a platform to share “some of the most horrific and devastating” child sexual abuse material.

Agencies involved in the operation include the FBI, the Australian Federal Police (AFP), the Royal Canadian Mounted Police, the National Crime Agency (NCA) in the UK, Europol, and INTERPOL.

The DIA described the investigated material as some of the “most egregious” investigators have uncovered.

Operation H Leader Tim Houston said the operation represented a major success of international efforts to undermine and disestablish the networks that seek to exploit children.

“I commend the ongoing support of our law enforcement partners domestically and across the world for their dedication and hard work,” Houston said. “This operation will have an impact on the global networks that deal in the most horrific and damaging material, and we are extraordinarily proud of the effect it will have on children’s lives around the world.”

He also noted the real-life consequences of these offences, as many people who view child sexual abuse material will later physically offend children.

“It is imperative that we are able to bring them to justice before they are able to do more damage,” Houston said. “This is not a victimless crime.”

AFP Assistance Commissioner Lesa Gale said the work of police across Australia in rescuing the children show that victims remain “front of mind” for law enforcement.

“Viewing, distributing, or producing child abuse material is a horrific crime. Children are not commodities, and the AFP and its partner agencies work around the clock to identify and prosecute offenders,” Gale said.

Operation Molto in Australia involved police agencies in every state and territory, with Victoria Police Cybercrime Division Detective Superintendent Jane Welsh warning parents that “children can be groomed in a matter of minutes.”

“I would urge parents to be vigilant and to proactively have conversations with your children about online safety,” Welsh said.

Sarah Blight, the deputy director of Child Sexual Abuse Threat at the UK NCA, said the operation was and continues to be hugely important.

“Work is very much ongoing across the country to disrupt more of these sexual predators,” Blight said. “Each month, the NCA and UK policing arrest around 850 suspects and safeguard over 1,050 children. The NCA is focusing on the most dangerous offenders.”