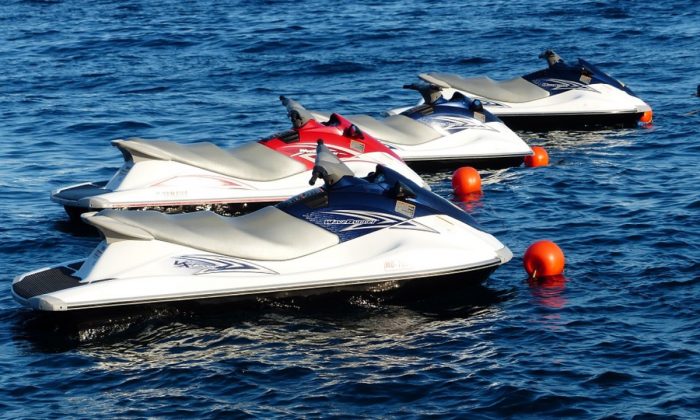 A human smuggler was arrested by police after they discovered he was transporting illegal migrants across the St. Clair River from Canada to the United States via jet ski, officials said.

U.S. Customs and Border Protection said in a press release on Aug. 23 that agents flying near the Blue Water Bridge—which separates the Canadian city of Port Edward in Ontario and Port Huron in Michigan—spotted the jet ski leave Canada with three people onboard on Aug. 20.

The jet ski crossed the St. Clair River and landed in Port Huron, Michigan, after which two individuals disembarked and began walking down the road while the jet ski returned to Canada.

Border Patrol agents monitoring the situation saw the two individuals who had disembarked then enter a vehicle which was then stopped by Marysville Station Border Patrol agents. The driver of the vehicle was identified as a 39-year-old U.S. citizen.

The two passengers were identified by authorities as Brazilian men ages 34 and 35. Both admitted to illegally crossing into the United States, authorities said. All three were taken to the Marysville station for processing.

Both admitted to Border Patrol agents that they had crossed the international border into the U.S. illegally and were taken to the Marysville Station for processing.

During processing, it was discovered that none of the Brazilian nationals had legal permission to be present in the United States.

“These criminals made their brazen attempt on a busy weekend without regard, or fear of our law-abiding community,” Chief Patrol Agent Robert Danley said. “While our strong U.S. and Canadian law enforcement partnerships facilitated a quick resolution, it cannot overshadow the role the community can play in our success. We continue to encourage the community to provide tips on suspicious activity.”

Two additional people were also arrested by the Royal Canadian Mounted Police as part of the coordinated response to the smuggling attempt. Their investigation is ongoing.

According to court documents obtained by WXYZ, the U.S. driver was paid $1,000 per person by a Canadian smuggler to drive the Brazilian nationals to New York.

“This is a testament to how federal and international partnerships are vital in our border security mission,” said Marc Sledge, director of the Great Lakes Air and Marine Branch. “Our agents perform an extraordinary job out there…each and every day to protect America.”

The arrests come as nearly 5 million illegal immigrants have crossed U.S. borders in the 18 months since President Joe Biden took office, according to a report by the Federation for American Immigration Reform (FAIR).