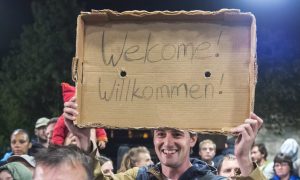 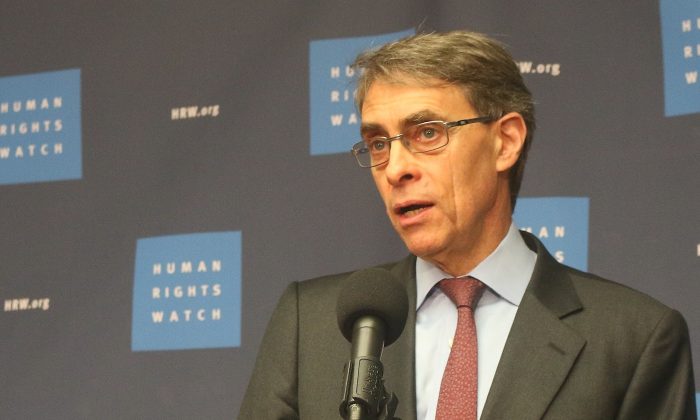 WASHINGTON—The increased willingness by authoritarian national leaders to ignore and, in some cases, flout fundamental human rights is the dominant theme of Human Rights Watch’s annual review of human rights around the globe, “World Report 2017.” It describes the rising influence of extremist political parties, placing in jeopardy the human rights system that has evolved since the end of WWII.

The 687-page report reviews the human rights developments from late 2015 through 2016 in over 90 countries. The reviews are quite brief, generally between 4 to 9 pages in length. One of the “countries” is the European Union; this section provides very short accounts, typically one page, of 12 European countries.

On Jan. 12 at a press conference held at the National Press Club, the report was released to the public. HRW Executive Director Kenneth Roth, who has an introductory essay in the book, spoke about his concerns regarding the refugee crisis, conflict in the Middle East, and the rise of demagogues.

Roth said that public discontent in the United States and in Europe has arisen from recent developments: feeling left behind by technological change, fear from terrorist attacks, and unease with society becoming more ethnically, religiously, and racially diverse.

“In this cauldron of discontent, certain politicians are flourishing and even gaining power by portraying rights as protecting only the terrorist suspect or asylum seeker at the expense of the safety, economic warfare, and cultural preferences of the presumed majority,” Roth said. “They scapegoat refugees, immigrant communities, and minorities.  … Nativism. Xenophobia, racism, Islamophobia, and misogyny are all on the rise.”

“A new generation of populists” claiming to speak on behalf of the people has arisen, treating human rights as “an impediment to perceived threats and evil.”

“They threaten to reverse the accomplishments of the modern human rights movement,” Roth said.

“Leading the charge has been Marine Le Pen in France and Geert Wilders in The Netherlands. But there are echoes of this intolerance in the Brexit campaign, the rhetoric of Viktor Orban in Hungary, Jaroslaw Kaczynski in Poland, and far right parties from Germany to Greece,” Roth said.

Roth criticized the presidential campaign of Donald Trump for stereotyping migrants, vilifying refugees, attacking a judge for his ancestry, and “dismissing multiple allegations of sexual abuse.” He said that in Europe, there is similar scapegoating of asylum seekers, immigrants, and especially Muslims.

The loss of confidence in human rights values—with a few exceptions such as German Chancellor Angela Merkel, Canadian Prime Minister Justin Trudeau, and “occasionally” U.S. President Barrack Obama—have set the stage for an attack on human rights and democracy worldwide. Roth said at the news conference that Germany’s Chancellor Merkel is the strongest European leader standing for Western values against the intolerance developing on the continent.

For the year 2016, HRW singled out Russia, China, Egypt, Turkey, Philippines, India, Burma, and Hungary for egregious violations of the rule of law and human rights. Below, Syria, Turkey, and Egypt are discussed in more detail.

No other region suffered last year more from human rights and humanitarian law violations and death than in Syria. With the death toll, as of Feb. 2016, of 470,000, and 6.1 million internally displaced persons and about 5 million refugees abroad, the people face a “dire humanitarian crisis.” New refugees face daunting challenges in finding safety. Jordan, Turkey, and Lebanon, which have taken in millions of Syrian refugees, “have largely closed their borders to new arrivals,” states the report.

HRW faults the European Union leaders for failing to come up with a plan to share responsibility for asylum seekers and to create safe routes for refugees. HRW expressed disappointment that the United States resettled only 12,000 Syrian refuges last year, and the new administration may end the program.

Roth said that President Bashar Assad not only attacks combatants, which is his right, but also besieges and attacks civilians as well as institutions like hospitals, both of which violate the laws of war.

The Syrian government tortures and ill-treats thousands that it detains, with thousands dying in detention, states the report.

The Islamic State (aka ISIS), and the former al-Qaeda affiliate in Syria, Jabhat al Nursa (name changed to Jabhat Fath al-Sham), targeted civilians with artillery, kidnappings, and executions in Syria.

In the section on Russia, the report states, “Despite repeated official denials, convincing evidence indicates that Russia used both cluster munitions and incendiary weapons in attacks on opposition-controlled areas.”

Cluster munitions have been outlawed by most countries because they don’t discriminate well between fighters and civilians due to the wide area in which they fall. Incendiary weapons result “in fires that are hard to extinguish and cause excruciating painful burns that are difficult to treat,” states the report. Many countries including Russia, but not Syria, have signed a weapons protocol prohibiting the dropping from the air of these weapons in areas with a concentration of civilians.

Only Syrian and Russian air forces could have been responsible for airstrikes in Sept. 19, 2016 which hit a United Nations aid convoy and a Red Crescent warehouse in Aleppo, killing 20 civilians.

Only Syrian and Russian air forces could have been responsible for airstrikes in Sept. 19, 2016 that hit a United Nations aid convoy and a Red Crescent warehouse in Aleppo, killing 20 civilians as they unloaded trucks and preventing food and medical supplies from reaching at least 78,000 people. The fact that the convoy had received the proper permits from the Syrian government was no protection.

Turkey: Coup Used as a Pretext to Repress

Last year, President Recep Tayyip Erdoğan of Turkey “used the coup attempt as an excuse to crackdown not only on the alleged plotters but also clamp down on tens of thousands of supposedly associated with exiled cleric Fethullah Gülen,” said Roth. President Erdoğan declared a state of emergency in order to “turn on his critics, close down independent media and civil society,” states the report.

The government placed in pretrial detention leaders and parliamentarians of the pro-Kurdish party and removed its local mayors, using terrorism of the PKK as a pretext.

Under the state of emergency, Erdoğan issues decrees that the parliament can’t stop and the constitutional court is not permitted to hear appeals. Many of these decrees allow for dismissal from public service without an investigation, confiscation of property without judicial review, and incommunicado detentions, whereby the detainees are denied access to a lawyer in the first five days of custody. “Over 100,000 public officials and civil servants have been dismissed or suspended,” the report states.

President Abdel Fattah al-Sisi of Egypt used his coup to impose “a rule that is far more repressive than anything that happened even under President [Hosni] Mubarak,” Roth said. The report states that the security police routinely torture and forcibly disappear persons with few consequences. Freedom of assembly is almost banned. One official of the National Security Agency bragged to Reuters that they have taken measures to prevent activists from gathering, have closed several cafes and other meeting places, and have arrested some preemptively to serve as an example to others.

The government has ordered travel bans and asset freezes against human rights organizations and their directors. The travel bans are probably a prelude to the filing of criminal charges for receiving foreign funding. A proposed law regulating NGOs that awaits approval of al-Sisi would effectively end independent human rights work within Egypt, according to HRW.

Roth wrote, “Sisi oversaw the killing of at least 817 Muslim Brotherhood protesters in a single day in August 2013—one of the largest massacres of protesters in modern times.”