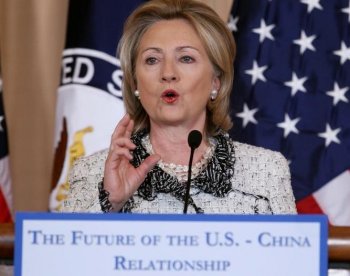 ARTICULATING POLICY: U.S. Secretary of State Hillary speaks about China during the inaugural Richard C. Holbrooke lecture at the State Department on Jan. 14, in Washington. Clinton spoke about the relations between the United States and China, including human rights relations ahead of a state visit by China's leader Hu Jintao. (Mark Wilson/Getty Images)
US

By Andrea Hayley
Print
WASHINGTON—The most substantive public comment made by U.S. officials prior to a state visit by China’s Hu Jintao this week was to say that “America will continue to speak out to press China” on matters of human rights.

In her policy outline, presented last Friday, Secretary of State Hillary Clinton suggested that if China did the work of upholding human rights, it would “benefit the long-term peace, stability, and prosperity of China.”

She also cited examples of this, such as the ability of an impartial judicial system and the rule of law to protect citizens’ property and guarantee that investors could benefit from their ideas.

It is unclear what administration officials expect to gain with such comments, considering China’s notable absence of impartial juries, and the rampant problems of intellectual property theft. But it is expected that China will respond to U.S. officials by promising to make “improvements” in a wide range of areas related to the economy.

Commerce Secretary Gary Locke told a gathering of the U.S.-China Business Council last week that he wanted China to deliver on its promises, offering specific advice for the implementation of change for that society, and indicating that empty promises would no longer suffice.

But on the issue of human rights, China typically rebuffs such warnings.

In a written response to questions submitted by the Washington Post and the Wall Street Journal on Sunday, Hu Jintao offered the following suggestion, "We both stand to gain from a sound China-U.S. relationship, and lose from confrontation.”

The Chinese Communist Party’s (CCP) regime, what Hu Jintao tries to whitewash as a “socialist democracy,” is largely sustained with violent force and crackdowns on critics of the CCP. That includes any group or religious movements that threaten to draw allegiance away from the CCP.

According to this year’s Freedom in the World survey, released by the influential NGO Freedom House, human rights in China are abysmal and continue to decline.

“[Authoritarian governments] are no longer being hypocritical, they are saying in essence drop dead when they [are] criticized by human rights NGOs and by democratic governments for the terrible human rights abuses that exist,” noted Abrams.

China has faced such criticism over its aggression in the South China Sea and its defiance of transparency on its military buildup. The timing of the stealth jet test flight during a visit by U.S. Secretary of Defense Robert Gates to Beijing recently was seen as deliberately provocative toward the United States.

In 2009, at the height of the global economic crisis, Secretary Clinton expressed that the United States was willing to set aside contentious human rights issues in favor of progress in areas of the economy, climate change, and international security.

Later that year, China was credited with sabotaging an international agreement on climate change and orchestrating it in such a way as to ascribe the blame to Obama and other developing countries.