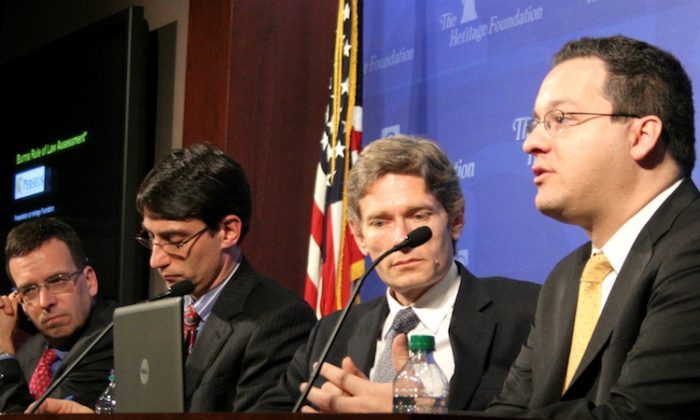 WASHINGTON—While the Burmese government is much further along in making reforms toward democracy than one could have imagined a few years ago, it still has a way to go.

The United States has suspended most of its sanctions on Burma (also known as Myanmar), without entirely revoking them. Some human rights advocates think the lifting of sanctions was premature.

At a discussion held at the Heritage Foundation in Washington, D.C., on Feb. 13, representatives of various human rights groups cautioned the United States to move slowly in it’s policy on Burma.

The ultimate aim of U.S. policy on Burma is for the military-led, authoritarian regime to evolve into a democratic government that respects the rule of law and human rights, recognizes the rights of tens of thousands of refugees and internally displaced persons (IDP), and will peacefully settle its long-standing conflicts with ethnic minorities.

In support of the reform process, President Barack Obama with then-Secretary of State Hillary Rodham Clinton visited Burma in November 2012. It was the first time an American president has visited the country. In July 2012, a U.S. ambassador was reinstalled in Burma after a hiatus of 22 years.

In a Human Rights Watch (HRW) report released before Obama’s visit, HRW senior researcher David Scott Mathieson wrote that the removal of U.S. sanctions was premature, and “should have been gradually repealed in line with demonstrable steps to reform.”

Walter Lohman, director of The Heritage Foundation’s Asian Studies Center and host of the foundation’s discussion, agreed, saying the U.S. policy needs to be calibrated. He said U.S. policy in one year see-sawed from applying “maximum pressure, to lifting the principal parts of the sanctions regime[n].”

In February 2012, the Obama administration rescinded its opposition to the IMF, World Bank, and Asian Development Bank’s assessments in Burma. By November, the last major U.S. sanction that banned Burmese imports was lifted.

The United States continues to impose sanctions on persons and entities on the SDN (Specifically Designated Nationals) list, including generals, “crony businessmen,” and businesses with “alleged links to violence, oppression, and corrupt practices,” according to the Huffington Post.

Lohman would like to see Congress establish benchmarks toward reform in connection with sanctions; major sanctions would be reimposed if the benchmarks are not met.

On May 15, 2012, she was quoted in the National Post: “I am not against the suspension of sanctions as long as the people of the United States feel that this is the right thing to do. … I sometimes feel that people are too optimistic about the scene in Burma. You have to remember that the democratization process is not irreversible.”

Frank Jannuzi, deputy executive director of Amnesty International (AI) USA, said that U.S. and EU sanctions “played a very important role in helping the government of Burma to change course.” He gave the major credit, nonetheless, to “the resilience of the Burmese people, including minorities demanding change in the face of constant brutality and repression.” He said the sanctions have been suspended and are “en route to being rescinded.”

He advised that the United States “go slow” and “retain as much leverage as possible” to ensure there is no backsliding on reform. Especially with regard to the military, known for its human rights violations, the United States should not grant legitimacy lightly and grant it only when real progress in reform has been made, said Jannuzi.

Tom Malinowsky, director of HRW in Washington, D.C., said the reform process in Burma is going to take time and require a lot more struggle.

“We need to move slowly in how we respond and reward progress,” he said. He said we tend to think the reform in Burma is on autopilot and moving forward on schedule, but it’s not.

“Our policy needs to be tied very precisely to what is happening on the ground in Burma at any given moment,” he said.

Demand to Release All Political Prisoners

There was a general consensus among the speakers on where the reforms are most urgent. At the top of everybody’s list was the release of all political prisoners. So far, the Burmese government has released about 800, according to Lohman. Jannuzi said that AI has no precise figure of the number of persons unfairly held.