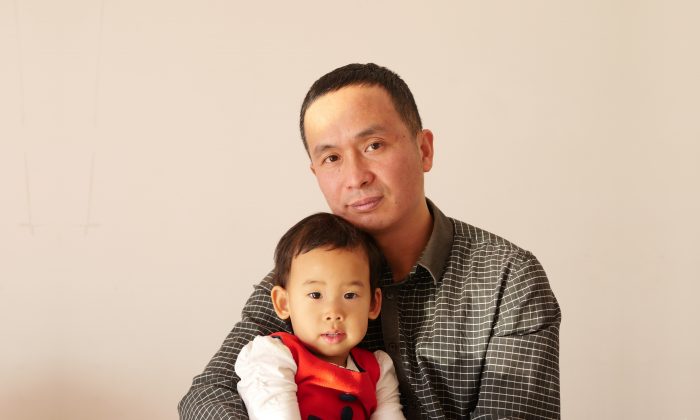 Xie Yanyi and his daughter in a recent undated photo. (The Epoch Times)
By Olivia Li

Renowned Chinese human rights attorney Xie Yanyi wrote to China’s National Health Commission on Jan. 20 demanding that it and the Wuhan City Health Commission publicize key information regarding the new coronavirus that is spreading across the country.

Xie told the Chinese-language Epoch Times that before the authorities announced new cases on Jan. 20, citizens did not know what was happening in Wuhan, while Hong Kong, Japan, and South Korea had long started screening passengers from the central Chinese city of Wuhan, where the outbreak originated.

“All across the country, people went on with their daily lives, as if there were no crisis at all. This type of cover-up, we have had enough of it,” Xie said.

The viral pneumonia broke out in December. Chinese medical authorities announced that the illness was caused by a new type of coronavirus on Jan. 9.

On Jan. 10, authorities stated that there was no obvious evidence of person-to-person transmission.

Then, on Jan. 11, medical expert Wang Guangfa claimed on state-run media that the disease was “under control.”

On Jan. 15, authorities changed their tune, and said “limited human-to-human transmission cannot be ruled out.”

In his letter to Chinese health authorities, Xie mentioned that before Jan. 19, news reports about the Wuhan pneumonia were rare and mostly appeared in less influential online news sites. The only report he could find on a relatively well-known site was from Chinese news portal NetEase (163.com) dated Jan. 4 and titled: “Seven Suspected Pneumonia Cases in Hong Kong, Local Government Initiated Serious Response Level.”

Xie cited a report published by the Imperial College London Medical Research Council Centre for Global Infectious Disease Analysis, whereby researchers used statistical modelling to estimate that there could be 1,723 cases in Wuhan by Jan. 12.

“It wasn’t until Jan. 19 that Chinese news portal Sina published an article announcing that an ‘outbreak response team’ was established by China’s National Health Commission on Jan. 1, and the commission recently dispatched experts to different provinces to provide guidance on disease control targeting pneumonia from coronavirus infection,” Xie wrote.

He called for the authorities to disclose key information, such as, when the first patient was diagnosed, details of emergency response plans at national and local levels, preventative measures to be used in public places, what guidelines Chinese citizens should follow to minimize the risk of infection, and major reasons for not disclosing the outbreak in a timely fashion.

Speaking to the Chinese-language Epoch Times, Xie said, “The way the authorities handled it, including the Ministry of Health and related departments, the Hubei Provincial Government showed a total disregard for human lives, which is dereliction of duty and a serious crime.”

He added that people have the basic right to know important information regarding their lives, safety, and health. Those are the most basic human rights, which go before all other rights.

“The officials involved are outright shameless. They have no bottom line. It’s beyond people’s imagination. Those who can do such evil, we would say, have no trace of humanity in them. I would ask what their motive is in covering up the truth,” Xie said.

He pointed out that Chinese authorities are making the same mistakes they made during the 2003 SARS outbreak.

“They haven’t learned from past mistakes, which causes enormous harm to people’s health, and huge economic losses,” he said. “Someone must be held responsible for this. Those who are responsible for the cover-up must be brought to justice.”