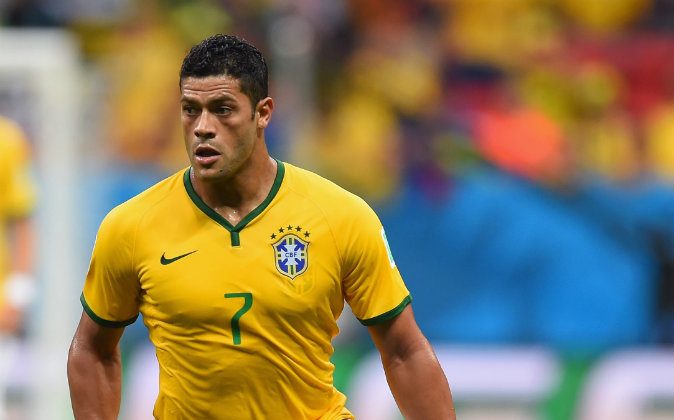 Hulk of Brazil controls the ball during the 2014 FIFA World Cup Brazil Group A match between Cameroon and Brazil at Estadio Nacional on June 23, 2014 in Brasilia, Brazil. (Photo by Stu Forster/Getty Images)
Sports

When Brazil soccer player Hulk’s name is announced by TV commentators, fans must be wondering what his real name is.

De Souza was given the moniker Hulk by his father, who is a fan of the Marvel comic book character, when he played football at the youth level. Incidentally, Hulk also does like his Marvel comic namesake as a child.

Today, the 27-year-old Hulk is a muscular, well-built, and for lack of a better word, hulkish figure in the Brazil squad. Hulk stands at 5’11 and weighs 187 pounds.

The powerful forward made his professional debut at Bahia state club Vitória, before moving out on loan to Japanese side Kawasaki Frontale at the age of 18. He later transferred to Consadole Sapporo, where he scored 25 goals.

Check out a video of Hulk and the Brazilian team working out in the gym.

See an Associated Press article on the Brazil squad.

Fernandinho trained with the main squad in its last training session before traveling for the match in Belo Horizonte on Thursday. He replaced Paulinho, who hadn’t lived up to expectations in the three group games.

Fernandinho went on as a substitute against Cameroon on Monday and scored the last goal in a 4-1 win that secured the hosts a berth in the knockout rounds.

He found the net with a toe poke from inside the area in the 84th minute, sealing Brazil’s victory. Fernandinho also helped set up Brazil’s third goal, which was scored by Fred in the 49th.

In the second part of the training session, Scolari also replaced Daniel Alves with Maicon and Hulk with Ramires, but Fernandinho remained playing among the starters throughout the session.

The Manchester City defensive midfielder was a late addition to the Brazil squad trying to win the World Cup on home soil. He didn’t get chances in Scolari’s squad for Brazil’s friendlies ahead of the tournament but was included in the squad just before the competition started.

Paulinho was given his starts in the group stage after thriving in last year’s Confederations Cup, the World Cup warm-up tournament that Brazil won as hosts.

“Both are quality players and have similar characteristics, so I think that tactically not a lot will change in our team,” Brazil striker Fred said.

Fernandinho started after halftime on Monday in Brasilia and the squad improved with him in midfield.

“Fernando did well when he came in,” Scolari said. “He defended well and created opportunities in attack. He has a good pass. We have been making observations and what we tried to do worked.”

Scolari had the starters play against the reserves for nearly an hour at the team’s training camp outside Rio de Janeiro on Thursday. Paulinho scored one of the goals for the reserves, which also got on the board with an own goal by Maicon.

Defender David Luiz left with an apparent back problem late in practice, but the injury didn’t appear to be serious. The Brazilian federation said he would be re-evaluated again Friday.

Alves had also been criticized for his subpar performances, while Hulk missed Brazil’s second group-stage match against Mexico because of a left leg muscle injury. They are expected to remain in the starting lineup for Saturday’s match.