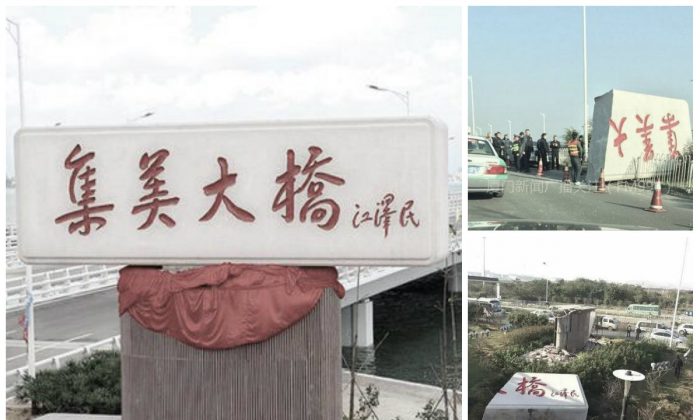 A commemorative stone marker near a bridge in Xiamen City mysteriously split in two on Feb. 29, 2016. The stone bears the calligraphy and signature of former Chinese leader Jiang Zemin. (Screen shot/Sina Weibo)
China

During the morning rush on a bridge in a major port city in southern China recently, a large commemorative stone inscription at the head of the bridge split cleanly down the middle, half of it falling onto the road. But it wasn’t just any stone.

The white granite slab bore the calligraphy and signature of former Chinese Communist Party leader Jiang Zemin, and was erected in a 2008 ceremony to open the 2.95 billion yuan (about $450 million) bridge, which connects the district of Jimei and the island of Xiamen in Fujian Province.

“Jimei Bridge,” it said, followed by Jiang’s name on the bottom right.

According to several reports in mainland Chinese news outlets, cleanup workers say that the stone slab, which was nearly twice as high as a person, snapped at between 3 to 4 a.m. in the morning of Feb. 29. No one was injured, but the one half had crushed a metal railing and blocked half a lane.

One cleanup worker told Southeast Express Daily, the newspaper of the Fujian provincial government, that the granite stone inscription could already possess defects, and probably split on its own accord after extended exposure to the elements.

But the stone had split on a clear, calm morning—the Xiamen meteorological station said wind speeds only reached a maximum of 1.9 m/s or 0.85 mph on Feb. 29—causing Chinese netizens to speculate on just what caused it.

It’s too ‘natural’ … This is very unusual.
— Sina Weibo user

“It’s too ‘natural,'” wrote one netizen on Sina Weibo, China’s Twitter equivalent. Another netizen wrote: “Is this Heaven’s will? This is very unusual.”

A video of the moment the stone split was also put online and carried in several news broadcasts. It’s unclear who recorded the video, which appears to be a cellphone video of security camera footage.

The matter of inscriptions on stones by top Party officials is a highly political question in communist China. State companies often welcome the visit of a top leader, who may be so generous as to bequeath a piece of his calligraphy, or an inscription (called “tici” in Chinese) which is then chiseled into a granite or a metal plaque. Jiang Zemin was particularly well known for leaving his inscriptions around China, as demonstrated in this case.

The longevity of these monuments, therefore, is also a political question.

This is why many Chinese immediately interpreted the apparently freak accident as somehow a sign that Jiang’s own political fortunes were exhausted. In a post that has since been deleted from Weibo, “ShuibinKK” wrote: “Old Jiang’s inscription on Xiamen’s Jimei Bridge has been removed! … It seems that information that Old Jiang will be ‘removed’ from power are accurate.”

Epoch Times has published numerous editorials arguing that the struggle between Jiang Zemin—for decades the godfather of the Communist Party—and Xi Jinping, who assumed power in late 2012, has been driving nearly all major events in China for the last four years.

Since coming to power in 2012, Party leader Xi Jinping has sought to root out Jiang’s political network through a sweeping anti-corruption campaign. In recent months, Xi has ordered a major military reform and conducted a very public tour of the Party’s press agencies, moves that political analyst say are efforts by Xi to consolidate his power.

Although Jiang Zemin had relinquished his position as Party leader in 2002, he continued to hold considerable sway over Party affairs and the running of the country for more than a decade, not unlike his predecessors Deng Xiaoping and Chairman Mao Zedong.

The potent symbolism of calligraphy inscriptions was revealed most recently last August, when a stone stele bearing Jiang’s inscription, displayed prominently on the front lawn of the Central Party School in Beijing, was suddenly dug up by tractors and removed. The Party School is the regime’s main center for ideological indoctrination and professional training of its cadre corps. Observers of Chinese politics saw it as a clear indication of Xi’s intent to further marginalize Jiang, a process that may ultimately result in the elder’s arrest.

After the Jimei Bridge stone split, searches for Jiang’s name on Sina Weibo shows the message: “According to the relevant laws, regulations, and policies, the search results for ‘Jiang Zemin’ are not being displayed.”