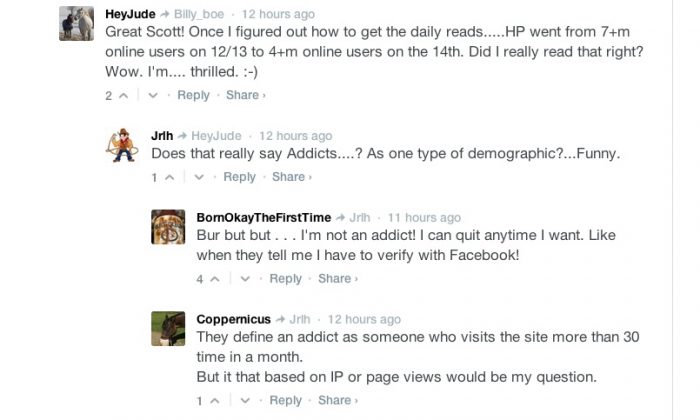 While there’s no way to confirm hard numbers, it seems thousands of users if not more, are leaving the Huffington Post (also known as HuffPost) and its previously robust community because of the newly introduced comment system.

Long-time, dedicated users of the website say that the verification part was one of the dealbreakers, but a bigger one was a promise being broken. HuffPost executive Jimmy Soni told users earlier in August that they would be grandfathered in, meaning they could keep their anonymous accounts since they had been around for a while. But that decision was later reversed without alerting users.

“The thing that really frosted me, and caused me to terminate my account was that they caught us by surprise,” commented one former user, “ChrisDC,” on an Epoch Times story.

“There was no way to comment on what they did without caving in to the garbage about linking to my Facebook page. So, they shut us up over there quite handily, didn’t they? I don’t like being tricked,” ChrisDC wrote in another comment.

Adding insult to injury, Tim McDonald, HuffPost’s director of community, has been unapologetic to the situation.

“Any change will come with a period of outcry,” he told Poynter. “We expected many users would not be happy with this transition, but are confident that as we move forward, this will make for a more engaged and diverse community.”

Soni, explaining the new policy, said: “We are capable of doing far worse things to one another when we do not have to own up to the things we do. The mob grants its members the gift of anonymity.”

While Huffington Post invested in its community, including hiring a 40 person team to moderate comments, “trolls have grown more vicious, more aggressive, and more ingenious,” he said. “As a result, comment sections can degenerate into some of the darkest places on the Internet.” Soni said about 75 percent of comments are rejected because they contain “unpublishable levels of vitriol.”

McDonald in the latest blog post said that HuffPost’s goal is to “maintain a civil environment for real conversation and community.”

However, that goal might be undermined not only by all the people leaving, but also by the people who will skirt around the verification issue.

“I spent five minutes creating a bogus Facebook account, verified it with an old prepaid phone I keep in the car, and I was straight back on HuffPo,” said user Simon Delancey on an Epoch Times story. “I notice most of the old idiots and trolls that I used to encounter are still active :(.”

According to users who have left the site, and others who are still there to see what’s happening, the number of users and comments have gone down exponentially. People commenting on McDonald’s blog post briefly outlining the new comment policy have been complaining of losing hundreds of fans in a period of one or two days, and that the number of comments sitewide is nowhere near where it used to be.

“Their lead story right now on Gun Control only has 716 comments (205 people talking) – an article like that also on gun control on Sept 21st of this year got 10k comments (with 1974 people talking!!)” said David Kronmiller on an Epoch Times story on December 13. “And September 21st was a Saturday of all days. Not the biggest traffic day I would think.”

Former HuffPost users have also commented  that their accounts are not really being deleted.

“I finally got an email my account is closed but they left a link in case I want to return. Proves that they are NOT deleting information on their side.,” wrote “aquarius2.”

Another user, “Sharyn G.,” wrote that she was banned from HuffPost for suggesting the move was to help Facebook get new accounts, among other things, but then got two emails inviting her to return.

Few news outlets have covered the widespread outrage about the new system, apart from Epoch Times and Poynter.

There have been problems across news websites from anonymous posting, but Huffington Post is known to have a relatively good system of moderation that includes some of its users. When Arianna Huffington discussed the upcoming changes in August, she told reporters after an event in Boston that “Trolls are just getting more and more aggressive and uglier,” according to GigaOM. She also referenced rape and death threats that came in anonymously, but they were on Twitter, not on the Huffington Post.

“I feel that freedom of expression is given to people who stand up for what they say and [are] not hiding behind anonymity,” she said. “We need to evolve a platform to meet the needs of the grown-up Internet.”

Some researchers have sought to find out whether anonymous comments spark “uncivil behavior,” such as one (pdf) that looked at the Washington Post website, where people could remain anonymous, versus its Facebook page. The study found that users were less civil on the website, and were also more inclined to direct uncivil behavior at others participating in the discussion on the website versus people not involved in the discussion on Facebook.

On the other hand, anonymity has been shown in several other studies to boost creative thinking and give a greater sense of community, something seen on Huffington Post itself.

Anonymity can play another important role: allowing people to participate in online discussions who wouldn’t be able to using their real name, or at the very least who would be much more constricted in what they said if they did use their real name. These people include government workers, a slew of which are said to have participated anonymously in discussions on Huffington Post, as well as rape victims and others.