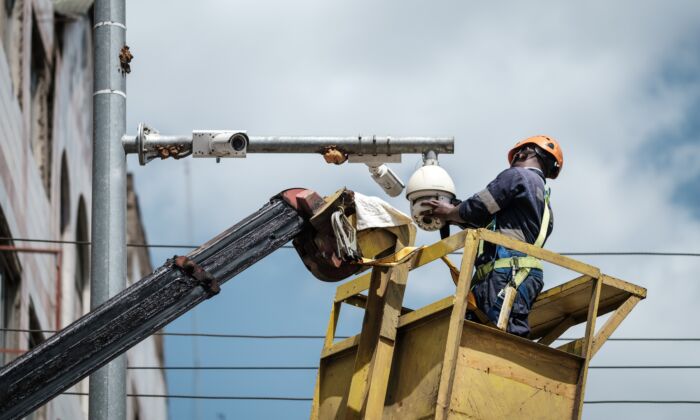 A worker cleans a surveillance camera on a street in Nairobi, Kenya, on Jan. 18, 2019. (YASUYOSHI CHIBA/AFP via Getty Images)
Huawei

China has been heavily promoting its surveillance technology among client governments around the world, but apart from miring the locals in debt and raising national security risks, the projects have produced lackluster results.

Completed in 2016 at a cost of about $100 million, the Safe City project in Islamabad boasts 1,950 surveillance cameras. Seventy-two screens in the Pakistani capital’s police headquarters help officers monitor the streets.

Huawei claimed that the endeavor would dramatically improve order, with a projected 15 percent reduction in violent crime. But while crime in Islamabad did fall in 2016, by the end of 2018, it had increased by 33 percent.

Pakistan is a key country in the “One Belt, One Road” (OBOR) initiative, the Chinese regime’s global infrastructure investment project. It has also been one of Beijing’s long-term allies.

Since 2015, Pakistan has engaged Huawei to build Safe City systems in nine cities.

A Nov. 12, 2019, report by Bloomberg cited a Pakistani legislative committee as saying that half of the Huawei-produced cameras in Islamabad were out of order.

From 2017 to 2018, instances of dacoity, a term used on the Indian subcontinent to refer to banditry, rose by 244 percent, while robbery and burglary saw a roughly 62 percent increase. Murders and kidnappings also became more frequent.

Police statistics showed that crime rose by about 2.9 percent throughout Pakistan from 2017 to 2018, with the capital seeing the worse increases.

Kenya, another country with heavy OBOR investments, has also installed Huawei’s Safe City system in its cities, including Mombasa and the capital, Nairobi. According to Huawei, the projects helped slash crime rates in the cities by 46 percent year-over-year from 2014 to 2015.

But Kenya’s National Police Service reported different results. Its statistics indicated the crime rate in Nairobi experienced a slight decrease in 2015, but increased in subsequent years, reaching a higher level by 2017 than before the Safe City program was introduced.

The same police report said that crime rates in Mombasa didn’t decrease following the installation, which also took place in 2014. Kenyan authorities haven’t commented on why the Huawei technology failed to work as advertised.

On Nov. 4, 2019, the Washington-based Center for Strategic & International Studies (CSIS) published a report that said Huawei used exaggerated data to promote Safe City projects. The report looked at data from Safe City projects installed in 73 cities across 52 countries; Huawei itself claims that the infrastructure has been set up in 230 cities in 90 countries.

CSIS’s report questioned Huawei’s claims about the program’s success, noting that “all statistics are reported for an unspecified location and time period and no specific data or sources are provided for the numbers.”

Moreover, “after adopting Huawei’s equipment, countries may be ‘locked-in’ by high replacement costs,” the report stated. That includes tech upgrades, as well as replacement and repair of poorly built components.

The CSIS report warns that the Chinese regime may be “exporting authoritarianism” by repurposing “facial and license-plate recognition, social media monitoring, and other surveillance capabilities” associated with the programs.

And because most of the projects are part of the OBOR plan, the clients are likely to be saddled with debts they can’t pay. There’s currently no publicly available data that show how much debt is caused by Huawei. But most of the OBOR countries with high debt risks use Huawei’s systems.

The People’s Republic of China (PRC) envisions OBOR as a project to span at least 68 countries and involve as much as $8 trillion in investments worldwide to build a vast network of transportation, energy, and telecommunications infrastructure, primarily linking Europe, Africa, and Asia.

In order to qualify for the loans, the client states are required to use Chinese products.

The report, which integrated the countries’ overall public debt-to-GDP ratio and the concentration of that debt with China as the creditor, identified eight countries where OBOR appears to create the potential for debt sustainability problems.

For example, Djibouti’s GDP was $1.73 billion in 2016, but it owes China $1.2 billion. The other seven at-risk countries are Pakistan, Laos, Mongolia, Kyrgyzstan, Tajikistan, Maldives, and Montenegro.

Kenya owes China $4 billion, and is among 15 countries that are significantly or highly vulnerable to debt distress because of their acceptance of OBOR loans.