Huawei Is Cornerstone of CCP Initiative to Overtake the United States 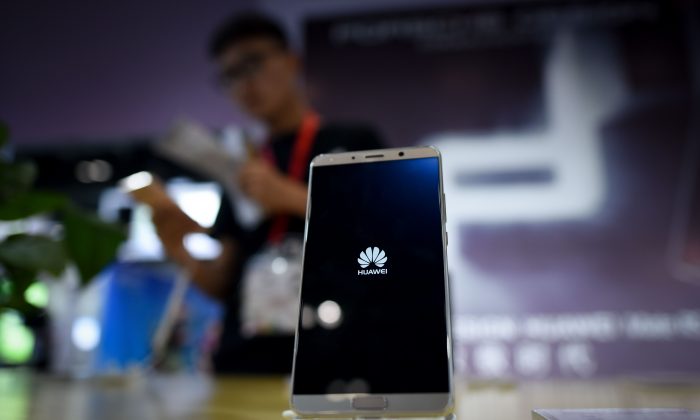 A Huawei mobile phone on display in Beijing on July 9, 2018. (WANG ZHAO/AFP/Getty Images)
By Joshua Philipp

The Chinese Communist Party (CCP) is pushing a goal, under the banner of sovereignty, of eliminating reliance on foreign systems within China and then ensuring Chinese-made systems dominate the global landscape.

In the push to dominate this domain, the CCP has identified core technologies, including satellite GPS, internet infrastructure, and semiconductors, with Huawei playing a key role in this agenda.

The Jamestown Foundation’s China Brief noted June 5 that Chinese leader Xi Jinping recently has been promoting this concept as an approach to “technology, the internet, and governance, one that seeks to embed [China’s] concept of ‘cyber sovereignty’ … in the institutions of global internet governance.”

In the past, the CCP’s concept of cybersovereignty often referred to its push to dominate the global internet space, an effort dating to at least 2010, which included a play to gain control of the internet globally through the United Nations in 2015.

As the program has advanced, however, it has broadened to include the foundational technologies that make the internet and global technology systems work, while maintaining the CCP’s spirit of social tyranny and global market domination.

Through the CCP’s “One Belt One Road” initiative, it’s constructing core infrastructure that includes an export of the “China Model” for totalitarian governance.

The Council on Foreign Relations reported in July that “China’s exporting of surveillance goods is a critical component of its ‘Digital Silk Road.'”

It noted that Huawei recently implemented its “Safe Cities” model in Nairobi, Kenya, where it installed 1,800 surveillance cameras as part of the program, and indicated that “although the cameras can help fight crime, they can also be used to monitor activists and protests.”

In addition to Nairobi, the report stated, “Huawei has deployed its systems across 100 cities in approximately 30 countries worldwide. Exports of such technology are being coupled with Chinese government-backed grants that create dependency of the importing country on Chinese-produced gear and incentivize further purchases of such equipment.”

A core aspect of this push is a new CCP-led internet framework that is separate from, yet interconnected with, the global internet. Included in this technology is the CCP’s massive systems for internet censorship and online monitoring—and again, coupled with it is Huawei’s internet infrastructure and systems for totalitarian social control.

Huawei plays a major role in the CCP’s programs for human rights abuse and domestic surveillance. A 172-page internal document from Huawei in 2015, which was leaked to the internet, was a training manual for Chinese internet police to monitor, analyze, and process video content. It also showed Huawei’s involvement with the CCP’s Golden Shield Project for censorship and Skynet System for surveillance.

The company’s technology is also part of the CCP’s Social Credit System, which creates a database on each person, tracks all available data about the individual, and calculates a “citizen score” that determines their level of freedom in society.

The CCP is also making substantial efforts to replace the U.S. semiconductor industry—technologies for which Huawei and Chinese telecom company ZTE still depend on Western companies, in developing and supplying them.

Weeks later, in late November, CCP officials claimed they had found evidence that Micron was price-fixing, along with Samsung and Hynix, and—without providing public evidence—claimed the companies were involved in anti-competitive behavior.

That came on the heels of temporary U.S. sanctions that banned ZTE from the U.S. semiconductor market, after ZTE was found to have violated U.S. sanctions on Iran. Though the ban was quickly lifted, it acted as a warning shot about the effect that U.S. sanctions could have on the Chinese tech industry.

With Huawei now facing a similar fraud case related to Iran, the stakes have grown, and the CCP’s programs to replace and surpass the United States as the global technology leader are front and center again, with initiatives to compete in 5G internet technology, new energy, quantum computing, and others.

In China, there’s a concept of “surpassing you at the curve,” and that’s become a guiding concept for the CCP’s aim to overtake the United States as the world leader in technology, under its Project 863 and China 2025 programs. The idea is that it’s very difficult to surpass someone already ahead in a certain area, but when the whole world is making a turn, that person can be surpassed.

Under the CCP, that means a focus on new and emerging technologies is paramount. The Party has been using foreign investment, research partnerships, state financing, and theft of trade secrets to give its companies an edge over their often privately owned foreign competitors when market shifts take place.

Huawei is among the key companies being used to achieve this goal.