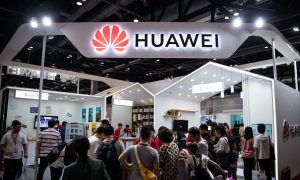 A new in-depth report on China’s Huawei exposes it as a powerful tool of the Chinese Communist Party.

Louisa Greve is the Director for External Affairs of the Uyghur Human Rights Project. She is an expert on human rights in China and an experienced non-profit advisor. She was formerly the East Asia Director at the National Endowment for Democracy. She is the author of several book chapters on ethnic issues and human rights in China.

Joshua Philipp is a senior investigative reporter at The Epoch Times. He specializes in analysis on politics, cybersecurity, and defense. His investigations over the last decade into connections between Chinese consulates, spy networks, and organized crime circles gives him unique insight into the global threat Huawei poses.