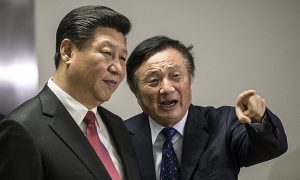 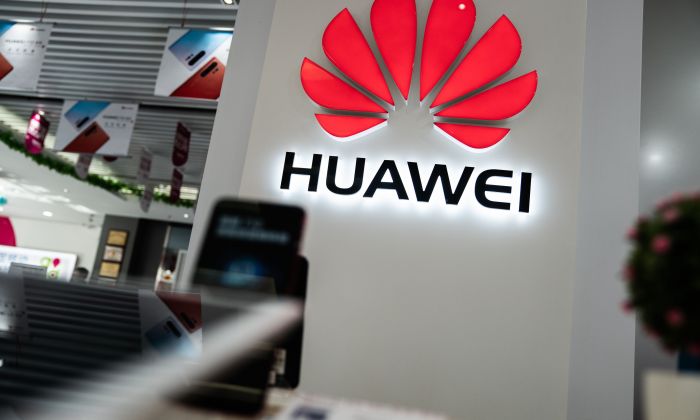 A Huawei logo is displayed at a retail store in Beijing on May 20, 2019. (FRED DUFOUR/AFP/Getty Images)
China Business & Economy

Following Western government accusations that the close relationship between Chinese telecom giant Huawei and the Chinese military makes it likely that the former would be used by Beijing for spying purposes, the company has consistently claimed that it has no such ties.

But more evidence has been uncovered showing how Huawei was able to gain domestic business and overseas markets through state support. These connections have in fact been  widely reported by Chinese state-run media.

“To say that they [Huawei] don’t work with the Chinese government is a false statement. He [company CEO Ren Zhengfei] is required by Chinese law to do that. The Huawei CEO on that at least isn’t telling the American people the truth, nor the world,” U.S. Secretary of State Mike Pompeo told CNBC on May 23.

Previous U.S. administrations were also wary about Huawei’s ambitions. In 2007, the Chinese firm wanted to purchase 16.5 percent stake of U.S. network device manufacturer 3COM. The deal was rejected on national security grounds by U.S. Committee on Foreign Investment (CFIUS) in March 2008 because 3Com involved in networking security software, a field in which it was a supplier to the U.S. military.

The state-run Huazhong University of Science and Technology Press in China published the book, “Ren Zhengfei’s Biography” in 2010, which documented how Ren founded Huawei and the company’s beginnings.

According to the biography, Ren left his military post at the People’s Liberation Army (PLA) in 1982, with the support of his father-in-law Meng Dongbo, who was then deputy governor of Sichuan Province. He moved to Shenzhen City in southern China, home to the country’s first special economic zone established in 1980.

Huawei’s first contract was to install a telecom system for the Chengdu City Military Region, one of the country’s seven military regions, which span Chongqing City, Tibet, and the provinces of Sichuan, Yunnan, and Guizhou.

The book did not disclose the total value of the order but noted that it helped propel Huawei’s growth from a small firm with 14 employees in 1987 into one with 600 research and development engineers by 1990.

The Chinese military was Huawei’s main customer at the time.

In 1993, the China Telecom Bureau, a central government agency (now defunct), signed an agreement with Huawei, for it to provide SPC switches to rural markets in China. At the time, China was operating under a semi-planned economy; all selling and purchasing were done by the authorities, with suppliers officially named by Beijing.

In 1995, the Chinese regime launched a policy to build telecommunication infrastructure in the countryside, contracting Huawei to build it. That year, Huawei’s revenues reached 1.5 billion yuan ($220 million), most of it coming from the rural market.

In 1998, the government opened the urban telecommunication market to Huawei, though the quality and reliability of Huawei’s equipment weren’t good.

After Yeltsin’s visit, Huawei was approved to set up a joint-venture, BETO-Huawei, in Russia. In April 1997, this Russian joint-venture became the company’s first overseas business.

Since then, with the Chinese regime’s support, Huawei expanded its businesses in eastern Europe, Africa, and South America, according to the biography.

The Chinese government’s official website explained on Sept. 23, 2009, post that China Development Bank (CDB), a financial institution under the State Council’s management, had supported Huawei continually for more than ten years. State Council is a cabinet-like agency under the central government.

The report said the CDB signed a cooperation agreement with Huawei on Sept. 22, 2009, supplying it with $30 billion in low-interest loans to support Huawei’s overseas markets, without providing further details.

The report also said that the CDB has supported Huawei since 1998. In the company’s beginning years, CDB supplied low-interest loans for it to develop and expand the Chinese market. Then in 2004, the CDB supplied Huawei with loans to support its overseas markets. For example, CDB supplied $10 billion to support Huawei’s business in African countries in 2005, the report said.

“They [China] are very aggressive and have a lot of money,” Chinese media quoted Alex Zornig, CEO of Tele Norte, as saying in 2011.

Loan interest rates were as high as 5.99 percent in Brazil, but CDB only charged 4 percent interest.

After New Century reporters visited South Africa, Ethiopia, Nigeria, and other African countries for more than one month in 2011, the magazine had reported that Huawei and its domestic rival, ZTE, won numerous telecom network deals in Africa due to “the huge financial support from Chinese policy banks [CDB and China Export-Import Bank] and quasi-policy banks [China’s business banks].”

After CDB and other Chinese banks provided low-interest or even interest-free long-term loans, those African countries would usually sign contracts for Huawei or ZTE to build their telecom infrastructure, New Century found.

There is also growing concern that Huawei could be exploited by the Chinese military.

The New York Times reported on Nov. 16, 2016, that Shanghai Adups Technology, a Chinese mobile app management software developer, had written spyware that was transmitting text messages, contact lists, call logs, geo-location, and other app data from Android-operating smartphones around the world back to Chinese servers every 72 hours for data analysis.

At the time, almost all Huawei and ZTE smartphones had pre-installed Adups software, though the companies made denials in statements to the press.

Even now, it is unclear why Adups collected the data. Some experts suspect data mining for advertising purposes, while others believe it could be part of the Chinese military’s intelligence work.

With Huawei, risks also remain due to China’s National Security Law, which requests that all Chinese citizens and enterprises “should support, assist, and cooperate with national intelligence work, and keep secret any such work known to them.” Furthermore, Chinese intelligence agencies can “collect intelligence information inside and outside of China using any necessary methods, measures, and channels.”

Based on Huawei’s previous behaviors, Chen Simin, a U.S.-based China current affairs’ commentator wrote in a May 26 commentary published in the Chinese-language Epoch Times: “Huawei grew into the largest telecom equipment supplier with the support of the Party, government, and military. Thus, Huawei has no choice but to obey the Party’s orders.”