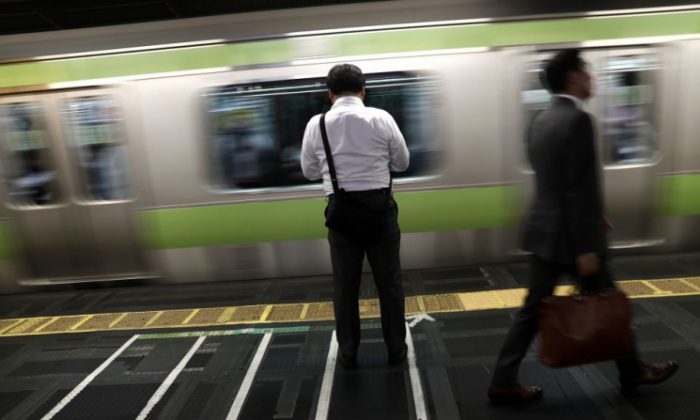 In this picture taken on Oct. 12, 2017, a man waits for the train at a subway station in Tokyo. The news that a young reporter at Japan's public broadcaster had worked herself to death came as little surprise to those inside the country's media, where a culture of "fighting spirit" has led to excessively long hours. (BEHROUZ MEHRI/AFP/Getty Images)
Asia & Pacific

A Japanese commuter train company has issued a public apology after a train departed a station 20 seconds ahead of schedule.

The Tokyo-bound train arrived on time at the Minami Nagareyama station in Nagareyama on Nov. 14.

The train was supposed to stay at the station for one minute and depart at 9:44 a.m., but because the crew failed to check the time, it left 20 seconds early.

“We deeply apologize for the severe inconvenience imposed upon our customers,” the Metropolitan Intercity Railway Company wrote in a statement, as translated by Sora News 24.

The train company said that it didn’t receive any complaints about the early departure, but still spoke to the train crew to prevent future slip-ups.

The next train would arrive at the station just four minutes later, according to the train’s timetable, NPR reported.

Japanese trains are notorious for running like clockwork. An apology for a 20-second error may seem overblown at first, but according to Sora News 24 reporter Casey Baseel, many Japanese commuters synchronize their watches to train station clocks.

As a result, people who miss their train on one leg of the journey may miss transfers as they travel toward their destination, and may ultimately be late for school or work.

“Four minutes times a few transfers could cause someone to be 15 minutes or so late, and while that’s not a huge difference, it’s still an inconvenience, and a potential embarrassment, for the people affected, and all because Metropolitan Intercity Railway Company didn’t deliver on its promise that the train would leave at 9:44, not 9:43:40,” Baseel wrote.

“Even if that’s not the sort of mistake that absolutely demands an apology, there’s nothing wrong, and definitely something admirable, about taking a moment to say sorry for any problems that the early departure may have caused,” Baseel added.

Japanese companies are known for an intense focus on the quality of service and viewing things from an end user’s perspective.

Last year, the maker of frozen snack Garigari-kun issued a televised apology after it was forced to increase the price of its product by 10 yen, its first price increase since 1991. The video apology featured the company’s entire executive staff bowing.

From NTD.tv
Support The Epoch Times. Share this story.