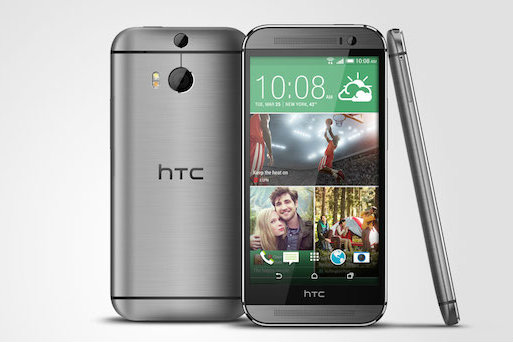 HTC could be launching their HTC One (M8) Windows Phone later this month.

The most recent evidence is a picture from Dutch mobile telecommunications company Telfort.

On their homepage, the HTC One (M8) Windows Phone can be sported along side an iPhone 5C and a Samsung Galaxy S5.

Telfort has since removed the HTC One (M8) and replaced it with another phone.

According to WPCentral, the WP version of HTC’s flagship smartphone will likely be announced in an event in New York City on August 19, and be released for sale on August 21 as a Verizon Wireless exclusive.

Also, judging by the screenshot above, and that the One W8 has cleared the GSM Global Certification Forum with European LTE Bands 7 and 13, the HTC One (M8) WP is almost certainly going to be sold in Europe.

See an AP tech story below.

Smartphones must include ‘kill switch’ under bill

SACRAMENTO, Calif. (AP) — California is on the verge of becoming the latest state to require technology that can disable smartphones when they’re stolen.

Law enforcement and consumer groups support SB962 as a way to deter thefts in response to a crime problem that has exploded nationwide. The bill by Sen. Mark Leno, D-San Francisco, passed the state Assembly 51-18 Thursday and will return to the Senate for a final vote on amendments.

Under the bill, smartphones must be sold pre-equipped with a “kill switch” that deactivates them if stolen. Such technology is already widely available to download, but the legislation would make the shut-off function standard unless a customer opts out. It does not apply to tablets or laptop computers.

“None of us should have our lives at risk because we walk down the streets with this device each and every one of us use all day long,” said Assemblywoman Nancy Skinner, D-Berkeley, holding up her iPhone on the Assembly floor.

The San Francisco district attorney’s office says more than half of all robberies in the city last year included the theft of a smartphone. Supporters of the bill also cite a Consumer Reports study that estimated 3.1 million mobile devices were stolen nationally in 2013, double a year earlier.

A report by state attorneys general, prosecutors, police and other officials, released in June, showed how deactivation devices are working to reduce smartphone thefts. After Apple Inc. added the optional “Activation Lock” feature to its iPhones in September, robberies of Apple products in New York City dropped 19 percent, while grand larcenies in the first five months of 2014 dropped 29 percent compared with a year earlier.

In May, Minnesota became the first state to mandate the shut-off technology on all smartphones and tablets, which consumers can opt-in to use, starting in July 2015. Similar legislation in Illinois, Rhode Island and New York did not advance this year.

Leno’s bill failed an initial vote in April after fierce opposition from wireless companies and manufacturers warning against varying state regulations for products sold internationally. Many phone manufacturers and wireless companies dropped their opposition after lawmakers agreed to amendments to push back the effective date, exempt tablets and pre-empt local regulations.

SB962, if signed by the governor, would apply to smartphones manufactured and sold after July 2015.

Apple, Google Inc. and Microsoft Corp. — which make the iOS, Android and Windows Phone operating systems used in 97 percent of U.S. smartphones — all plan to have theft deterrent options by then.

Leno said the technology must be universal and standard across most phones to send the strongest message to thieves that smartphones aren’t worth robbing.

Some Republican lawmakers said the legislation overreached, pointing to voluntary steps taken by cellphone companies to adopt the technology and take other measures to discourage robberies.

“This is another example of California thinking that it knows better than our technology innovators and the customers they serve,” said Assemblyman Jim Patterson, R-Fresno.