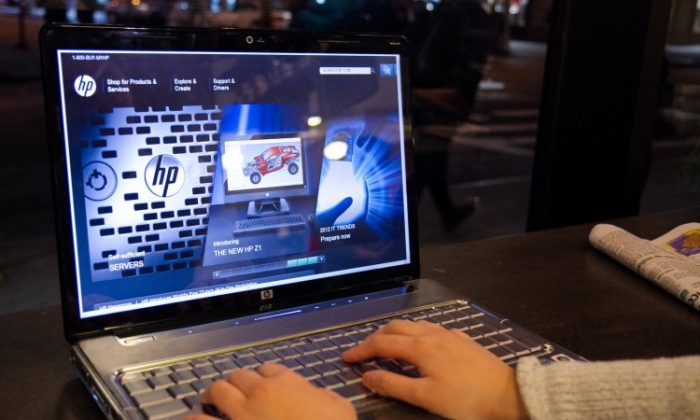 A person browses the Hewlett-Packard website while using an HP computer at a cafe in Midtown Manhattan on Feb. 23. (Benjamin Chasteen/The Epoch Times)
Business

NEW YORK—Computer and electronics giant Hewlett-Packard Co. (HP) this week reported disappointing sales and offered a weak 2012 outlook, as its new CEO tries to streamline the sprawling company to better compete in the market place.

HP said that sales of printers and PCs—two of its main product lines—were not as robust as hoped. Sales of high-margin enterprise servers also fell 10 percent compared to last year.

Going forward, the company expects earnings per share for the second quarter to be between 88 and 91 cents per share, which is below analysts’ consensus estimates.

Traditional PC makers have seen their revenues decline in recent quarters as tablet computers and smartphones become more advanced. In addition, HP was challenged by executive turnover and strategy shifts over the last year.

Chief Executive Meg Whitman, an industry veteran who took the helm at HP last September, is in the midst of trying to turn around the company and its multitude of businesses and product lines.
Whitman was a longtime CEO of eBay Inc. and more recently, attempted a candidacy for California’s governorship.

In a conference call with analysts on Wednesday after market close, Whitman said she had spent the better part of last few months “to set the right tone, calm the waters, and reassure our stakeholders,” and “visited HP offices, hosting roundtables and employee meetings.”

Whitman shared her three-pronged turnaround strategy for the company on the conference call.
First and foremost, “fixing our execution, ensuring we have the right systems, processes and people,” was key to improving HP’s business, Whitman said. This area included decreasing the number of SKUs—products—as well as streamlining the company’s complex supply chain.

Regarding the company’s supply chain, Whitman admitted on the call that HP has not been as good as it could be in managing the process from design to delivery of products, a strong suit of industry heavyweight Apple, Inc.

Next, she mentioned that some of HP’s business lines and offerings needed a tune-up. “We didn’t make the investments we needed to during the past few years to stay ahead of customer expectations and market trends, and as a result we see eroding revenue and profits today,” she said.

Thirdly, she cited “tectonic shifts” occurring within the technology and IT industry, and that HP needs to take the initiative to “invest now as a market leader from a position of strength.” Though she did not provide specific examples, one can imagine that a portion of such a shift relates to mobile computing.

HP confirmed that the company will have ready a lineup of PC products for the upcoming Windows 8 operating system in time for the 2012 holiday season.

“We have a product line lined up in PSG (Personal Systems Group) on Windows on X86. We believe we’re going to be well-positioned for holiday on Windows 8 X86,” Whitman said on the conference call. X86 is an industry terminology for the current generation of computer chip design.

HP is one of the first computer makers to state with certainty of upcoming Windows 8 products.

Microsoft Corp. announced Windows 8 last summer, and while the company has not officially revealed a release date, analysts expect a fall 2012 release for the next-generation operating system, which will borrow heavily from the current Windows Phone 7 smartphone platform.