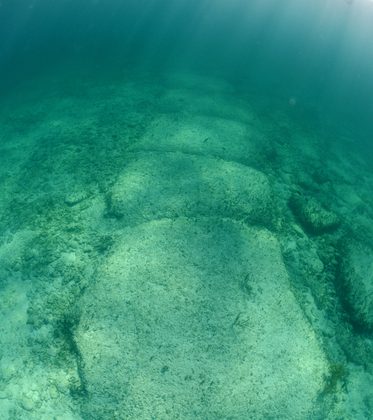 Bimini Road, stones submerged off the coast of the Bahamas said by some to be a man-made wall some 10,000 to 20,000 years old. It is part of body of evidence some say show prehistoric civilizations were far more advanced than conventional science is willing to admit. (Shutterstock*)
Beyond Science

How Was it Made? Prehistoric Underwater Wall Divides Scientists

Two camps of scientists have faced off on the issue of the underwater structure known as Bimini Road off the coast of the Bahamas since it was first discovered in 1968.

One camp says it is a 12,000–19,000-year-old man-made structure—flouting the conventional understanding that advanced civilizations only emerged some 5,000 years ago.

The other camp says it is a natural formation.

Dr. Eugene Shinn dismisses as “New Age” the claims that a culture advanced enough to build such a structure existed in that region so long ago. He has behind him the heavy weight of current scientific understandings.

Dr. Greg Little realizes his claims to the contrary are viewed with “outright ridicule,” as he explains in a 2005 paper on the subject. “I have no expectation that any of the skeptics will actually change their views or even consider any alternatives to their beliefs,” he writes.

“All contradictions to their beliefs are probably perceived as a direct threat to them professionally and psychologically,” Little says. “The long history of science has countless examples of widely held beliefs that were proven wrong by research. But even in the face of incontrovertible proof that these beliefs were wrong, many so-called scientists refused to accept the new evidence.”

Little is a psychologist who has taken a keen interest in Bimini and has participated in multiple dives with archaeologist William Donato along the structure.

Donato explains in an email to the Epoch Times that the line of stones form a wall, known as a breakwater, built to protect a prehistoric settlement from waves. During their dives (documented by film and photographs), Donato and Little found the structure to be multi-tiered and to include prop stones they say must have been placed there by humans.

The duo also say they found anchor stones with rope holes carved into them and at least one stone later analyzed at the University of Colorado, which was found to have tool marks, deliberate shaping, functional wear, and erosion features similar to steps.

Little writes that a neutron activation analysis compared nearby shore stones to the Bimini Wall stones and showed the Bimini stones had fewer trace elements, suggesting they were formed elsewhere and transported to that location.

“We know what the Bimini Road is now,” Donato says. “The natural feature theory has been totally discredited. Shinn has no background in archeology and [Marshall] McKusick [who worked with Shinn to promote the natural-formation theory] seems to know nothing about marine archeology.”

Shinn, a retired geologist who worked for the U.S. Geological Survey, argues Bimini Road is made up of beachrock—the climate in the region causes sand and other materials on the shore to cement into rock relatively quickly, creating “beachrock”—that was covered by water as the sea level rose.

Rocks of similar shape and in a similar formation have been found in some other regions, says Shinn. The information he sent the Epoch Times in response to inquiries, however, did not seem to explain exactly how the rock forms into the large, thick block shapes seen in Bimini.

Shinn carbon dated some rock samples and found them to be only about 5,000 years old or younger. But, he later admitted to Little, the accuracy of his dating is questionable. Little explains that bulk dating is inaccurate because the samples can be contaminated by materials from later dates.

Shinn told Little, according to Little’s 2005 paper: “You are right, dating of beach rock is not very precise especially if it is a bulk sample. The dates listed in the Nature article were bulk dates done at a later date by a student learning the carbon 14 method.”

Little also accuses Shinn of changing the results of some of his studies.

One of the proofs Shinn has given in recent writings and interviews that Bimini is naturally formed involves core rock samples he took to show a dip toward deep water. If all the cores show a dip toward deep water, explains Little, this would indeed prove the rock formed where it is and did not form elsewhere later to be transported by humans to its present location.

When Little confronted Shinn on his discrepancies, Shinn replied: “You must realize that because of all the craziness surrounding the Bimini site and the unusual people, it was hard to take the exercise with the same seriousness we would have employed with our regular research. We did it for fun. There was not the peer review usually associated with our real jobs. The details you have pointed out are evidence of minimal peer review. I got a little carried away to make a good story.”

The Epoch Times asked Shinn to confirm he said this to Little and asked him to clarify the discrepancies pointed out by Little.

Shinn said via email: “I am not going to nit-pick over Little’s concerns.”

He called into question the funding behind Little’s work. Little is funded by the Edgar Cayce Foundation, says Shinn, which was started by people who believe in the writings of Cayce (1877–1945), a purported psychic who had visions of Atlantis.

Little states in his 2005 paper that his work on Bimini is not a quest to find Atlantis. “Skeptics invoke emotion-laden, ridiculing terms,” Little wrote.

Little states: “For obvious reasons, mainstream archaeologists have avoided Bimini as if it was infected with a deadly virus. They have been convinced by reading others’ summaries of the early research—not by digesting the actual facts—that Bimini has to be nothing but natural beachrock and that a harbor cannot be there—therefore it is not there.”