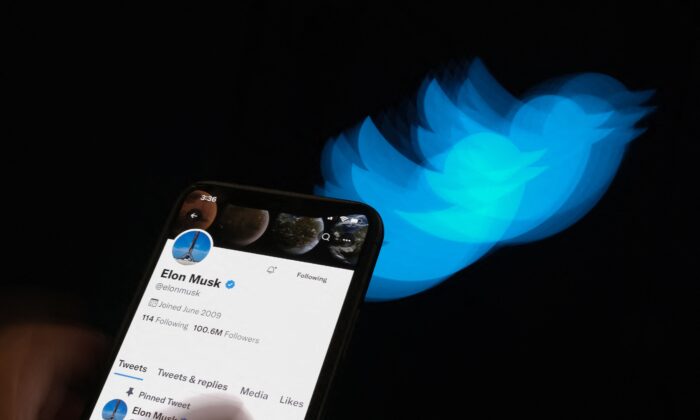 Elon Musk's Twitter page displayed on the screen of a smartphone with Twitter logo in the background in Los Angeles on July 8, 2022. (Chris Delmas/AFP via Getty Images)
Markets

Close on the heels of Musk’s disclosure of his intentions, Bret Taylor, chairman of Twitter’s board, wrote on Twitter that the board is committed to closing the transaction on the price and terms agreed upon with Musk.

He also warned of pursuing legal action to enforce the merger.

“We are confident we will prevail in the Delaware Court of Chancery,” Taylor said.

Wedbush analyst Daniel Ives said he sees a “long, nasty court battle” ahead. Given the Twitter board’s fiduciary responsibility to keep driving the Musk deal, it will be in the courts battling for potentially years to recoup the deal and/or the break-up fee of $1 billion at a minimum, he added.

“This started as a soap opera in April when Musk launched the bid and ends as a nightmare on a Friday night in July. Now to the courts it goes,” Ives said.

Ives said this is a “code red” situation for Twitter and its board. The analyst does not see other bidders emerging at a time while legal proceedings play out in the courts.

The analyst sees the renegotiation option as clearly out the window now. He reduced the price target for Twitter shares from $43 to $30, reflecting Twitter on a standalone valuation basis.

The deal termination is worth 5–10 percent to Tesla shares, Future Fund founder Gary Black said. The Twitter overhang regarding the need for Musk to sell additional Tesla shares and CEO distraction is now lifted, he added.

The 5–10 percent move, according to the analyst, may not happen in the coming week. Walking away could be a tactic to get a better price, and Musk might not buy back the $8.5 billion Tesla shares he sold to finance his Twitter buy, the analyst said.

Additionally, institutions that exited Tesla may wait until after the second-quarter earnings to invest back in, he added.

Black also suggested that only when Musk sells the 73.1 million Twitter shares he accumulated, will it be known for sure it’s all over and that it isn’t just a negotiating tactic.

Musk’s argument that Twitter knew that bots accounted for more than 5 percent of the user base and that he relied on that percentage while making the bid may not hold up in court, the analyst said. The Twitter board may not want to tie up the company for 12-18 months and may negotiate a lower price, he added.

If Musk can strike a new Twitter deal for $45 per share, the overhang on Tesla shares disappears, given the financing needed drops.