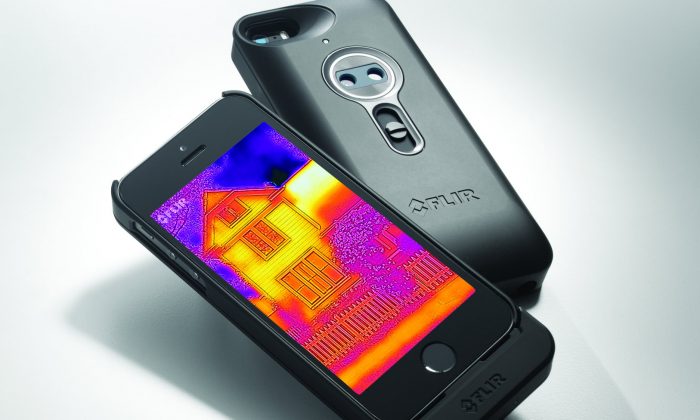 An iPhone accessory, Flir One, turns the smartphone into a thermal imaging device, great for ghost-hunting. (Courtesy of Flir)
Beyond Science

How to Bust Ghosts, Track Coincidences, and Other Weird, Cool Things With Your iPhone

Many of the devices used by ghost hunters come in app form for iPhones. Apps are also giving researchers a method of collecting large swaths of data from smartphone users. Scientists are starting to gather information from the citizen scientist this way on topics related to human consciousness and various unexplained phenomena.

Flir One (Courtesy of Flir)

An iPhone accessory released in July by Flir Systems Inc. turns smartphones into thermal imagers—usually expensive and coveted ghost-busting devices. The price of the accessory is $349, much cheaper than thermal imaging devices. This fall, Seek Thermal plans to release an add-on camera for smartphones costing about $250, according to the Wall Street Journal.

Steve Gonsalves of The Atlantic Paranormal Society, a famed member of Syfy’s “Ghost Hunters,” explained in a post on the Syfy website how thermal imaging is useful in ghost hunting.

“Because spirits are composed of energy and energy emits radiation, you can theoretically use the thermal imaging camera to see a temperature artifact left over from a spirit’s passage. We’ve learned over several investigations that balls of cold temperature detected by the thermal imaging camera may indicate a sudden energy void caused by paranormal activity,” he wrote.

It’s even useful in picking up normal activity ghost hunters may miss. For example, he had asked a ghost for a sign at a purportedly haunted site and immediately heard a loud rustling. The thermal imaging showed it was a rabbit in the bushes, not a ghost responding to the question.

He warns that people should familiarize themselves with how the device displays their own body heat, as that heat can be reflected off of surrounding surfaces unexpectedly.

The iEMF app is an electromagnetic field detector—great for ghost-busting say the pros. It detects fluctuations in the local magnetic field using the built-in magnetometer on the iPhone 3GS/4.

This 99-cent app worked just as well as a $300 EMF detector, reported Lindsay Hoshaw in a Forbes article. She went on a ghost hunt with the Para-Boston Society and compared her app to the hunters’ equipment.

SpiritVox: Picking Up on Voices From the Other Side?

Electronic voice phenomena (EVP) are said to be voices of the dead communicating to the living through various electronic devices. Often radios are tuned between stations or some other sort of random noise or static is played as a medium through which the spirit may communicate. Many have reported hearing words or phrases.

The SV-1 SpiritVox iVox app by Daniel Roberge is available for $5. It gives the user various options for creating random noise suitable for detecting EVP.

The iTunes description notes that the app is used and trusted by Bill Murphy of TV’s “Fact or Faked,” and by Barry Fitzgerald and Robb Demarest of “Ghost Hunters International.”

ALSO SEE: Study Explores Whether the Dead Can Communicate Through Electronics

The Synchro iPhone app was created by designer Lesley Roy, in collaboration with synchronicity researchers such as Dr. Gary Schwartz at the University of Arizona. The app allows users to record information about any synchronistic events they encounter to help create a data pool for researchers. The Synchro Project, which analyses the data, “is intended to move toward a breakthrough in the study of what C.G. Jung defined as ‘meaningful coincidence unlikely to have occurred by chance,'” according to its website. A “synchro” is defined as “a synchronistic event—a coincidental experience perceived as extraordinary and significant.”

Similar to the Synchro app, the Collective Consciousness app aims to collect data to understand a phenomenon long theorized about, but not easily quantified. The developers closed their crowdsourcing Indiegogo campaign in March after raising about $17,000 to get the project started.

Among its other functions, the app turns a user’s smartphone into a random number generator (RNG). Studies that attempt to measure or somehow quantify human consciousness often look at how a person’s thoughts can influence such generators. The numbers generated should conform to a certain probability without any outside interference. If the results vary by an anomalously large margin from chance in the direction of a user’s intention, then it may be deduced that consciousness had an effect.

The larger the number of tests, the greater the statistical power of the results.

CONSCIOUSNESS APP from Subtangle on Vimeo