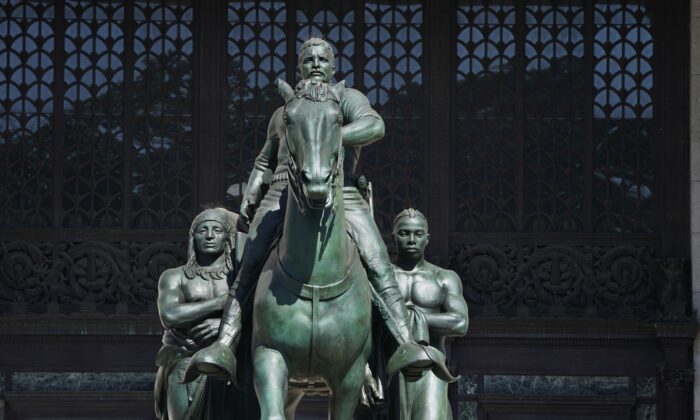 The Theodore Roosevelt Equestrian Statue is seen in front of The American Museum of Natural History on the Central Park West entrance in New York City on June 22,2020. (Timothy A. Clary/AFP via Getty Images)
Viewpoints

Back in the olden days, the Swiss art historian Heinrich Wölfflin noted that “not all things are possible at all times.”

Wölfflin was talking about historical constraints in the realm of artistic style.

Mondrian’s abstractions, for example, wouldn’t have been possible in the age of Rubens.

The point can be generalized.

Last summer, it was open season on statues and other monuments.

In June 2020, 1,000 people gathered at Byrd Park in Richmond, Virginia, “to stand in solidarity with indigenous peoples.” That day, the object of their wrath was an eight-foot statue of Christopher Columbus, which they toppled and dragged to a nearby lake for disposal.

“Columbus represents genocide,” explained one of the protestors.

That night, the iconoclasts got along without the expert advice of Sarah Parcak, an Egyptologist from the University of Alabama who, just the previous week, had taken to Twitter to provide tips on how best to topple obelisks.

Twitter can’t abide criticism of Hunter Biden, support of Donald Trump, or heterodox opinions about the CCP virus. But it is happy to provide a platform for academic anarchists like professor Parcak or the English academic who was ready with instructions about how to permanently damage stone monuments with caustic household chemicals.

One of the monuments at hand was a statue of Winston Churchill, known the world over as an apostle of British imperialism.

But that was then, back in the halcyon days of summer 2020, when “mostly peaceful protests” torched police stations, smashed storefronts, and maimed policemen. Back then, the world was treated to treatises like “In Defense of Looting” by Vicky (formerly Willie) Osterweil.

Shortly after publication, Amazon listed “In Defense of Looting” as its “#1 New Release,” while the book’s publisher gushed that it provided “a fresh argument for rioting and looting as our most powerful tools for dismantling white supremacy.”

Has anyone inquired about the status of her royalties, a form of private property especially dear to authors?

In any event, I am surprised that s/he wasn’t tapped for a place in the Biden administration (though for all I know she has been).

But not all things are possible at all times. In the summer of 2020, it was all the rage to deface or topple statues, to destroy or expropriate private property.

But that was B.B., Before Biden. Recently, New York Mayor Bill de Blasio decided to drop charges against the hundreds of vandals who had been arrested in the riots of 2020.

The meme was “it’s only property,” smashing stuff is a legitimate form of protest, and so on.

But all that suddenly changed on June 24, when it was discovered that someone had defaced a statue of St. George Floyd, drug addict, violent felon, and martyr. Now, the mayor was singing a different song.

“Last night,” he wrote on Twitter, “a far-right extremist group [how does he know that?] vandalized a statue of George Floyd in Brooklyn. A racist, loathsome, despicable act of hate.”

Oh, dear. But fear not, the mayor is on it. “The City Cleanup Corps is repairing the statue right now and a hate crime investigation is underway. We will bring these cowards to justice.”

How quickly times change. Or maybe Cicero had it right when he was lambasting Catiline: “O tempora, O mores!” (Oh, the times! Oh, the customs!)

Over at Instapundit, Ed Driscoll had some fun with de Blasio’s newfound moral indignation. Among other things, he quotes from an insightful piece by Sahil Mahtani.

We used to think that the Taliban’s habit of destroying important cultural artifacts was a mark of barbarism.

Now, we’ve learned that it is an avant-garde gesture, and is, therefore, commendable.

“Today’s conversation about statues is not an argument about slavery or colonialism or even minorities more generally,” Mahtani observes. “It is an argument about historical objects, and what you do with them as values change.”

Indeed they do. And where are we now?

“Over the years,” Mahtani concludes, “we’ve learned that our commitment to liberalism and free speech was outmoded. We won the battle over ourselves, and learned to see that the Afghan dogmatism that we wrote off as medieval was, in fact, the future.”

Not everything is possible at all times. But I guess we have come to the point where de Blasio, having embraced his inner Taliban, is emerging as a new censor.

The grinding noise of cognitive dissonance is patent.

Meanwhile, there is further progress.

The statue of Teddy Roosevelt that has stood in front of the American Museum of Natural History for decades is finally, at last, being carted away.

All those delicate denizens of the Upper West Side can untwist their knickers.

Teddy, flanked by an Indian and a black man, will soon be gone. That source of palpitations will be removed.

The universe will have taken more steps toward the sort of unanimity and historical vacuousness that the Taliban embraces and its American crybullies emulate.