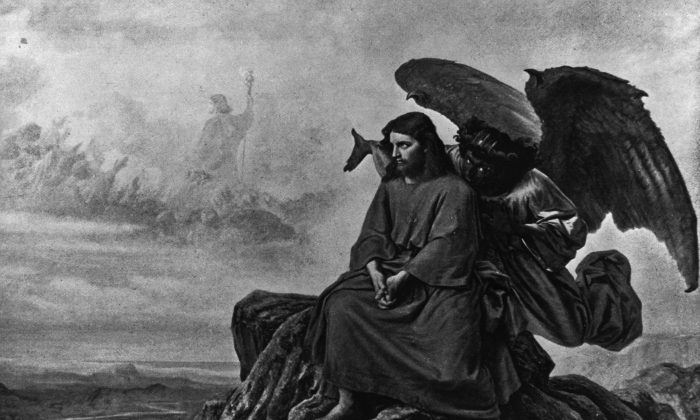 The devil tempts Jesus while he is alone in the desert, in this illustration. (Photo by Hulton Archive/Getty Images)
Viewpoints

In a previous article, I explained the true origin of left and right, and how this relates to the ancient paradigm of the left-hand and right-hand paths. This has manifested in many ways over millennia, and much of my work has involved informing the public about the false framing of morality by those (consciously or otherwise) on the left-hand path.

The reason that this topic matters is because left and right are either falsely dismissed as irrelevant, pushing us toward subjective morality, or mischaracterized as a system of “might makes right” that further enables subjective morality.

This sets a very dangerous precedent, because if there’s one term that defines evil, it’s subjective morality. This can be described as the belief that morality is decided by the individual, rather than a universal law independent of people. This leads to the belief that you can do whatever you want, as long as you can get away with it.

We must break the stranglehold of this way of thinking if we’re going to create something better. Unfortunately, subjective morality is attractive to a great multitude of people, meaning that it’s a difficult process to undo. We must, therefore, peel away the layers upon layers of pseudo-philosophical confusion that justify subjective morality and attack objective truth.

What, however, will we find once we accomplish this? The answer to this question isn’t something that secular society is necessarily ready for, but what we’re truly dealing with is Satanism. This may seem hyperbolic, possibly hysterical, but Satanism doesn’t necessarily relate to a literal entity. It can also relate to a state of mind.

In this article, I will begin to define Satanism, and how it’s perpetuated in society.

The political left stems from Satanic ideology, and it’s unfortunate that an emotional or sentimental attachment prevents people from seeing why. In community organizer Saul Alinsky’s magnum opus, “Rules for Radicals,” he acknowledged Lucifer thusly: “Lest we forget at least an over-the-shoulder acknowledgment to the very first radical: from all our legends, mythology, and history (and who is to know where mythology leaves off and history begins—or which is which), the first radical known to man who rebelled against the establishment and did it so effectively that he at least won his own kingdom—Lucifer.”

Some deny that Satan and Lucifer are one and the same, partly because the word Satan means accuser or adversary in Hebrew, and the Old Testament does not talk of Satan as a person. Lucifer is mentioned in Isaiah 14, when he fell from Heaven after trying to supplant God as “the most high.” While it’s true that Satan is only personified in the New Testament, this came from the Old Testament description of Lucifer, whose name was changed to Satan upon defeat, because he was the adversary that accused God.

It’s important to understand this, because Lucifer (and Satan, by extension) is the archetype of the left. Alinsky suggested that Lucifer fought against the established order and won his own kingdom in the process, this being not only Hell, but authority on earth, as per New Testament passages such as Revelations 12:9 and 1 John 5:19.

Alinsky’s acknowledgment embodies the way that the left models the Luciferian archetype of rebellion against the established order, and it’s for this reason that the left perpetually attacks tradition and conservative values. Just as Lucifer used lies to convince many angels to follow him, left-wing leaders use the same strategy.

Some may argue that there are times when rebellion is necessary, such as the American Revolution or the English Civil War, but there is a fundamental motivation that can’t be overlooked.

Order Out of Chaos

Those on the right-hand path seek order over chaos. When order is threatened by chaos, such as tyranny and injustice, rebellion is deemed justifiable. We can compare this to how the American Revolution was sparked by the injustice of taxation without representation, therefore destroying the chaos of tyrannical British rule.

Conversely, those on the left-hand path seek order out of chaos. By fomenting so much chaos that people become desperate for order, people will surrender their liberties for security. We can compare this to the chaos of the French Revolution that led to Napoleon’s dictatorship, or the manufactured chaos of the Chinese Cultural Revolution that made people desperate enough to worship Mao Zedong like a god.

Another significant facet of Satanic ideology is inversion, which is why Satanic symbols are inverted forms of the original (the inverted pentagram or cross, for example). The left claim that their rebelliousness stems from intolerance and injustice in society, but even when they succeed, their craving for order out of chaos can never be satiated, as they forever move on to the next social-justice cause.

Today, it’s transgender bathrooms, plastic straws, or President Donald Trump, but tomorrow, who knows? What’s certain is that the left will never be content, because we don’t live in a utopia.

Lust for power is the true driving force behind leftist ideology, and it’s with this realization that we can truly begin to see why Alinsky was such a defining figure of the modern left. Each of the 12 rules that Alinsky defined demonstrate that the left are motivated only by power, and those without moral standards will be pressured to choke on their own book of rules, as we see with Alinsky’s fourth rule, “Make the enemy live up to its own book of rules.”

Thus, we can now see why the modern left does indeed epitomize the ancient and occult left-hand path, a powerful form of psychological conditioning perpetuated in society by master manipulators. Alinsky merely adapted these ancient techniques to a modern setting by appealing to the egotistical weaknesses of human beings.

As the saying goes, you can’t reason with the unreasonable, and when you’re dealing with people who see chaos as a means to an end, you’ll never be able to defend yourself until you’re prepared to acknowledge, just as Alinsky did, that the roots of the left are Satanic.