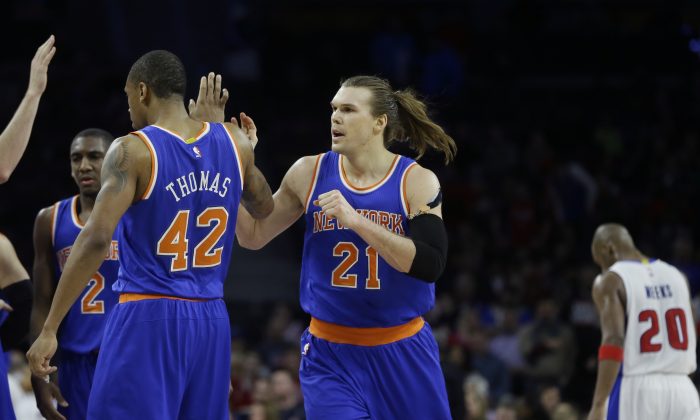 New York Knicks forward Lou Amundson (21) is congratulated by teammates as Detroit Pistons guard Jodie Meeks (20) walks back to the bench during the closing seconds of the second overtime of an NBA basketball game, Friday, Feb. 27, 2015 in Auburn Hills, Mich. The Knicks defeated the Pistons 121-115. (AP Photo/Carlos Osorio)
NBA

How the Lakers and Knicks Won Five Games Recently

Strange things are happening in the NBA following the All-Star break. The worst five teams have won 10 games.

The Knicks and Lakers have won half of those games, both putting together small winning streaks over the past week or so.

New York beat the Pistons, a team trying very hard to get every win possible to make it into the playoffs, and the Raptors, a team also very much in need of wins, in back-to-back games. The two wins were the first for New York without Carmelo Anthony this season.

The biggest reason for the recent success? The Knicks are scoring more–a lot more. New York is averaging a mere 93 points a game, one of the worst marks in the league. Over the past two games, that figure has jumped to 112 points, behind big games from Tim Hardaway Jr., who has had a mostly forgettable season, and Andrea Bargnani, who has been missing in action until the last few contests.

Against the Raptors, Bargnani added 19 points on 6-for-12 shooting, and got to the free throw line seven times. Hardaway Jr. added 22 points on 8-for-15 shooting, again including 2-for-5 behind the arc, and also grabbed 7 rebounds.

The Knicks have gotten great contributions from other players as well. Lou Amundson somehow managed 17 points against the Pistons while also grabbing 14 rebounds. Shane Larkin added 16 points and 3 assists. In Madison Square Garden against Toronto, Alexey Shved came off the bench for 15 points and 5 assists. Lance Thomas added 8 points and 5 rebounds, while Cole Aldrich added his own 9 points and 4 rebounds.

“No matter what happened the night before, they’re coming back with the right effort and playing with the right mindset,” Knicks coach Derek Fisher said after the first win. “That’s the only way you can win a game like tonight. As coaches we’re happy for our players more than anything, because they need some positive feedback from the effort they put in.”

“Both nights were great teamwork. Everybody that stepped on the floor did something good for the team,” Bargnani said after the second win.

The Knicks are doing several key things better recently, including grabbing more rebounds. The top line is traditional stats over the past two games; the bottom, over the entire season so far.

From one angle, New York played great offense and stopped the other team just enough to pull out wins. The Knicks had a 106.6 offensive rating for the past two games. This season, that rating is at a dismal 98.8. The Knicks had a 102.0 defensive rating over the past two games. That’s way better than the 107.6 rating for the season.

The other keys included keeping turnovers low–11 against Detroit and 13 against Toronto; getting to, then shooting well from, the free throw line; and outrebounding the opponents. Their 51 rebound average over the last two games is much better than the season average of 40.3.

Los Angeles won three straight games recently with similar methods to the Knicks. The Lakers were led by a balanced scoring attack, with different players stepping up on different nights. Jordan Clarkson scored a career-high 22 points on 10-for-16 shooting in the first win, over the Utah Jazz. Four other players scored in double figures.

Two nights later, in a win over the Milwaukee Bucks, Wayne Ellington scored 11 straight points to help put the game away. Five other players, including Clarkson, Jordan Hill, and Jeremy Lin, scored in double figures.

In their most recent win, over the Celtics, the Lakers got huge games from Lin, who notched 25 points and 6 assists; Wesley Johnson, who scored 22 points on 9-for-11 shooting; and the newly recovered Nick Young, who notched 19 points on 5-for-9 shooting, plus 6-for-8 at the free throw line.

“Jeremy Lin killed us the whole night,” Boston coach Brad Stevens said. “He was really effective in a lot of ways – not only scoring the ball, but also getting into the paint and making plays for others.”

The Lakers advanced stats over their recent three-game winning streak, top, and the whole season, bottom.

Most importantly, in all three close games, Los Angeles got crucial stops near the end of the game, while scoring just enough points. Hill, Ellington, and Robert Sacre had two free throws apiece late against the Jazz; Hill, Johnson, and Lin added points to Ellington’s streak against the Bucks; and Lin, Carlos Boozer, and Ellington made big shots to help the Lakers overcome Boston in overtime.

There’s a sense among both the Lakers and Knicks that some of the players this season have earned a spot on next season’s squads. Langston Galloway will almost certainly play a big role next season for New York, whether starting or coming off the bench; and high-energy players such as Amundson and Thomas will likely get some minutes next season off the bench. In just a few games, Shved and Bargnani look pretty nice as well. In fact, Fisher has pegged Shved as a good fit for the triangle.

In L.A., Clarkson continues to impress in his first year, while Ellington and Hill are among those who will likely be brought back next season.