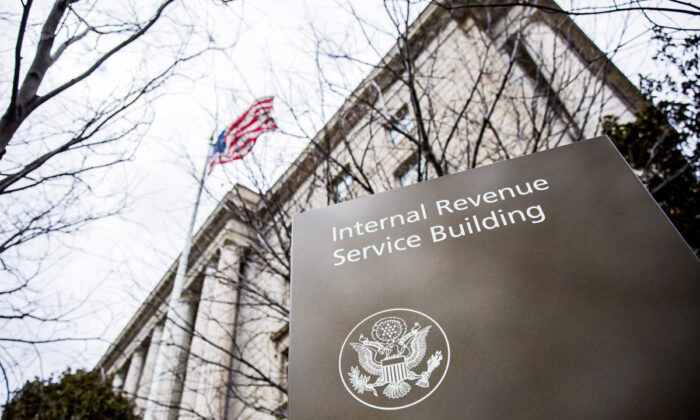 How the IRS Expansion Would Empower Ruling Elites to Target Americans

“He has erected a multitude of new offices, and sent hither swarms of Officers to harass our people and eat out their substance.”

Those were the words of Thomas Jefferson in the Declaration of Independence, referring to the depredation of King George III. The sentence was part of a long list of grievances that bolstered the argument that England’s king and Parliament were becoming tyrannical.

Two and a half centuries later, Democrat Party elected officials are in lockstep about creating swarms of officers to eat out our substance.

The Senate on Aug. 7 passed the Inflation Reduction Act, in a 50–51 vote along party lines, legislation that has little to do with reducing inflation and much more to do with funding progressive spending priorities and—more ominously—doubling the size of the Internal Revenue Service.

Interesting that the Biden administration is focused on doing this when the nation’s southern border is a sieve and military recruitment is catastrophically low.

Of all the bad parts of the Senate legislation, this massive expansion of the IRS is the aspect that is most concerning. In fact, I would bet that six months or a year from now, it’s all the average American will really remember from it.

Democrat officials and media allies strenuously insist that the expansion of the IRS is all about monitoring the rich and that you have nothing to worry about if you are following the law.

The White House doubled down on this message on Aug. 9.

Karine Jean-Pierre says with a straight face that no one making under $400,000 will be audited by one of the new 87,000 IRS agents hired by the Manchin-Schumer bill.

If you believe that, I have a bridge to sell you in Brooklyn.

Sen. Mike Crapo (R-Idaho) put Democrats on the spot by offering an amendment to the Senate bill stipulating that the new IRS funding and agents couldn’t target those making less than $400,000 a year. Democrats unanimously voted against it.

Crapo amendment to the Manchin bill to limit the bill's 87,000 new IRS agents to auditing comapnes and individuals with income of $400,000 or more FAILED 50-50.https://t.co/oPKr11BAYw pic.twitter.com/mH4wuMsmJ4

Biden and Democrats in Congress know where the big money is in this country. It isn’t with the rich. No, it’s in the hands of America’s vast, although perhaps shrinking, middle class. The Wall Street Journal explained what the legislation is really about:

“The main targets will by necessity be the middle- and upper-middle class because that’s where the money is. The Joint Committee on Taxation, Congress’s official tax scorekeeper, says that from 78 percent to 90 percent of the money raised from under-reported income would likely come from those making less than $200,000 a year. Only 4 percent to 9 percent would come from those making more than $500,000.”

Also, who doesn’t have a story about some government agency—the IRS or the DMV, for instance—making a mistake and putting you through misery while the cumbersome, bumbling bureaucracy slowly untangles the mess?

The IRS is about to go “beast mode,” as the Journal explained. It will unleash an army of agents—larger in number than the armies of most NATO countries—to harass and eat out the substance of the poor and middle class, to paraphrase the Declaration of Independence.

Of course, the new overlords in the ruling elite probably aren’t huge fans of the whole Declaration of Independence thing. After all, according to their media friends, the American Revolution was a mistake, Thomas Jefferson was no more than a racist slaver, and the country was really founded on white supremacy rather than liberty. Even displaying the symbols of the American founding might get you put on a terrorist watch list by the FBI at this point.

Speaking of the FBI, the IRS expansion pairs nicely with the FBI raid on Aug. 8 on former President Donald Trump’s Mar-a-Lago resort. Grave warnings already had sounded that the FBI had become politicized and that it was being used to target political foes while ineptly failing to address serious crime.

The only assurance we get is from the so-called experts who are in lockstep politically with the agencies telling us that all is well, nothing to see here.

Historians, legal experts, others say ex-President Donald Trump's framing of the Monday FBI search of his Florida home as a political attack is wrong.
https://t.co/OaOCJTIHVJ

Dozens of crisis pregnancy centers around the country have been targeted and vandalized since someone leaked the Supreme Court’s draft majority decision in the abortion case of Dobbs v. Jackson Women’s Health Organization.

So far, no arrests have been made in connection with these violent incidents. Apparently, the Justice Department has more pressing concerns, such as investigating parents who show up to voice discontent at school board meetings.

It’s hard to shake the feeling that the Biden administration would use an expanded IRS as a weapon to threaten, intimidate, and investigate political foes.

And that’s the bigger issue at stake here. Our unaccountable federal agencies are becoming thoroughly politicized.

Now one might think it’s reckless to target political foes. After all, that power can be turned around and used in the other direction after an election, right? Wrong.

As we’ve seen, these agencies obey and operate along only one side of the political spectrum. When Trump was in the White House and Republicans controlled Congress, it was all about the “Resistance.” Now that Democrats are in charge, it’s about focusing all that government power to reward allies and punish enemies.

That’s what the power of the unaccountable administrative state has led us to.

It’s not just the FBI. The IRS’s own recent history brings to light the danger of a government agency being turned on domestic political opponents. Under the Obama administration, Lois Lerner improperly targeted tea party organizations as director of the IRS unit that oversees applications for tax-exempt status.

After years of hearings and investigations, the only result was an empty apology from the IRS. Lerner, who pleaded the Fifth Amendment to avoid giving testimony to Congress, faced no criminal charges and kept her bonuses and retirement.

Imagine what would happen to you, fellow citizen, if you had lied to the IRS or were even just accused—rightly or wrongly—of impropriety by the federal agency. The IRS would ruin your life.

Oh, but these government employees are doing it all for “democracy,” so don’t you worry about the implications.

The bottom line is that Americans have every right to be deeply concerned about this IRS expansion. Rapidly expanding the agency’s size and scope at this moment, while pretending it’s only about targeting the “rich,” doesn’t pass the smell test.

As Americans get poorer because of inflation and the “don’t call it a recession” recession, Democrats are eagerly expanding the government and spending more taxpayer money to do it.

When Joe Biden ran for president in 2020, he was touted as a “uniter.” If the Biden administration goes through with this outrageous engorgement of the IRS, it just might succeed in uniting most Americans after all. United in outrage.