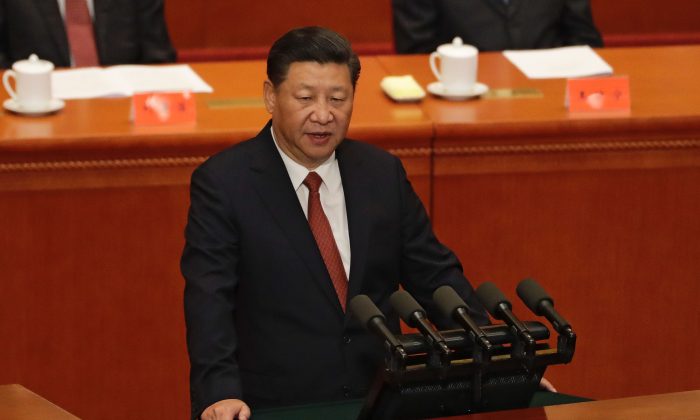 Chinese leader Xi Jinping speaks during a ceremony to commemorate the 90th anniversary of the founding of the People's Liberation Army at the Great Hall of the People in Beijing on Aug. 1, 2017. (Andy Wong/AFP/Getty Images)
China

The Chinese Communist Party elite have a decades-old habit of determining policies and key political appointments while vacationing at Beidaihe, a resort town near the Bohai Sea off China’s east coast.

But Chinese leader Xi Jinping might be breaking from tradition this summer. Leisure will be the main agenda at Beidaihe, and meetings (usually of the political “horse-trading” sort) will take a backseat, The Epoch Times has learned from various sources. Also, elderly Party cadres won’t be welcome this year; in the past, influential retirees have usually become powerful backroom operators.

The new rules at Beidaihe come after several peculiar political and military moves by Xi in recent weeks. Xi appears to be continuing his ongoing campaign to eliminate a rival political faction and consolidate his control over the regime.

If Xi gains or maintains momentum leading up to a major political reshuffle that will take place at the Party’s 19th National Congress near the end of the year, he will almost certainly be able to populate the Politburo Standing Committee—the most powerful leadership body in the regime—with officials of his own choosing.

Many China watchers or news publications believe Xi to be the most powerful Chinese leader in decades because he has accumulated a small stack of credentials—Communist Party “core” leader, military “commander-in-chief,” head of several small but powerful policymaking bodies, and more.

Credentials, however, are a poor indicator of a leader’s authority, given a political system in which mafia-like personal allegiances and sprawling patron-client networks allow former paramount leaders to remain influential well into their retirement.

Ex-Party boss Jiang Zemin (1989–2002) had reduced former Chinese leader Hu Jintao (2003–2012) to a mere figurehead by installing for him an expanded Politburo Standing Committee (nine members as opposed to the seven in Jiang’s time), filled almost completely with Jiang loyalists. Overseas Chinese news publications had a saying that Hu’s orders seldom got further than the gates of Zhongnanhai, the Chinese leadership compound in Beijing.

Jiang could have arranged a similar setup for Xi if not for the controversy surrounding his own protégé in 2012, prior to Xi taking office. Wang Lijun, the right-hand man of the ambitious Politburo member Bo Xilai, revealed a “major power struggle” in the Chinese leadership to American diplomatic officials when he tried to defect at a U.S. consulate, according to Bill Gertz of the Washington Free Beacon. Xi has publicly alluded to a coup plot in speeches where he denounced Bo and a handful of other purged Jiang associates for attempting to “wreck and split” the Party.

Despite the Bo Xilai scandal, Jiang was still able to seat his cronies in key positions and governing organs under the Xi leadership.

For instance, three out of seven members in the current Politburo Standing Committee are known Jiang acolytes. Until earlier this year, most of the top provincial officials were linked with the Jiang faction. And Jiang’s faction still influences the regime’s domestic security and legal affairs apparatus, propaganda department, and the foreign ministry.

The Jiang faction’s resistance has prevented the Xi leadership from properly implementing reform-minded political, legal, or economic policies in the past five years, analysts say.

Xi, however, has been very successful in his anti-corruption campaign. Many of the over 200 high-ranking officials and generals that have been purged are Jiang faction members and supporters.

The weakening of the Jiang faction, and Xi coming into his own, can be observed through Xi’s recent political and military moves.

In the last week of July, Xi purged Sun Zhengcai, the former Politburo member who appeared to be groomed by the Jiang faction to be a future Chinese leader. Days later, Xi convened an emergency two-day meeting with the regime’s top political and military leaders in a heavily guarded Beijing hotel. While note taking and recording were not allowed at the meeting, Taiwanese online news site Up Media reported that Xi had vowed to suppress external and internal “anti-Party opposition” and “unstable factors … at all costs.”

Veteran Hong Kong-based journalist Zang Shan believes that the timing of the meeting before the Beidaihe retreat spells trouble for Jiang faction elders. “It’s possible that Xi Jinping will take measures against Zeng Qinghong or Jiang Zemin,” Zang told The Epoch Times. “Something should happen in the next two or three weeks.” Zeng Qinghong was vice chairman under Jiang and served as his unofficial right-hand man.

A further sign that Jiang is persona non grata in the Xi era can be observed in the unusual absence of all Party elders during a grand military parade on July 30 at the Zhurihe training base in Inner Mongolia. Xi was joined only by top military leaders, and the parading troops hailed Xi with “Hello, Chairman” instead of the usual “Hello, Commander.” Chairman is a higher title than commander.

Going by the current state of affairs in the Chinese regime, the incoming Politburo Standing Committee announced at the upcoming Party Congress could shape up in three ways.

In the first scenario, all Standing Committee members are either selected by Xi or his established allies. Wang Qishan, Xi’s anti-corruption chief and closest ally, stays on past the current retirement age for elite cadres of 68 (Wang is 69). This permutation will indicate that Xi is in a dominant position and that the Jiang faction has become virtually ineffectual at the highest rungs of power.

In the second scenario, Jiang’s cronies get one or two of the Standing Committee seats. This outcome will occur if the Jiang faction is able to engineer significant internal or external trouble for the Xi leadership before the 19th Congress. Xi could then come to a compromise with the Jiang faction by offering them a token presence in his leadership.

The third scenario sees Xi cut the number of Standing Committee members from seven to five, with all members being Xi allies or loyalists. Such a scenario will suggest that the Jiang faction is on the verge of collapse and that Xi intends to move the regime away from a collective leadership model to one more centered on his personal authority.