How Much Longer Can Buybacks Push Stocks Higher? 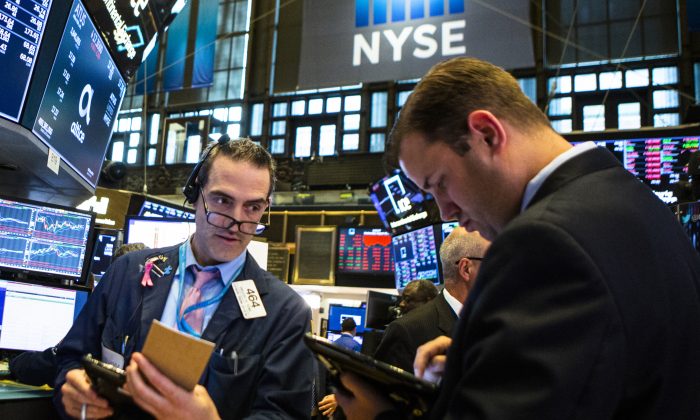 Traders work on the floor of the New York Stock Exchange ahead of the closing bell on Aug. 15, 2018. Share buybacks are now one of the biggest sources of demand for stocks. (Eduardo Munoz Alvarez/Getty Images)
By Rahul Vaidyanath

Companies buying back their own shares is now one of the biggest sources of demand for stocks, helping propel the S&P 500 to new record highs.

Goldman Sachs expects the amount of stock bought back to reach a record US$1 trillion this year. And August is the most popular month for corporate buybacks, accounting for 13 percent of annual activity.

The rise in the volume of buybacks results from the Trump administration’s historic tax reform enacted last December, but strong corporate earnings and cash flow growth are needed too. Companies are also repatriating cash held abroad. Thus, what is of lesser concern now is the increasing leverage that arises from companies borrowing money to pay for stock repurchases.

Share buybacks are the low-hanging fruit for management, although signs point to a decreasing bang for the buck.

“In a way it’s catnip for management teams,” said RBC Wealth Management’s Alan Robinson in an interview. “They see the direct relationship. It’s a quick way of supporting the share price by reducing the float [amount of shares outstanding].”

Robinson adds that as long as the stock’s performance is a factor in management’s compensation, then buybacks will be a major component in a company’s capital allocation.

It is also easier to see the benefits of share buybacks as opposed to long-term capital spending. While companies have also increased capex—or brought forward business investment intentions given the tax breaks—the benefits tend not to show up for years, potentially. A widely held criticism of the management of companies and their incentive structure is the de facto short-term focus.

As companies buy back their stock at record-high prices, the marginal impact on the share price decreases. Even with a record dollar volume of share buybacks, the buyback yield (total repurchases relative to total stock outstanding) has been more subdued.

“In a way, share buybacks have been a victim of their own success,” Robinson said.

A reason for the slowdown in share buybacks relative to market capitalization is that management is becoming more cautious in its expectations of earnings, cash flow growth, and ease of obtaining funding, according to Robinson.

RBC tracks the year-over-year reduction in S&P 500 shares outstanding, which despite the record dollar volume of share buybacks is not falling as fast as it did in prior years. The record amount of share buybacks actually isn’t keeping pace with the record growth of the stock market.

In principle, share repurchases send the same signal to shareholders as does a cash dividend: The company does not have sufficient reinvestment opportunities for the amount of cash flow generated. It could also indicate that management thinks its shares are undervalued and wants to send a message to the market, which some companies did after the October 1987 crash.

Share buybacks are also more flexible than cash dividends as they are not a long-term commitment. A company does not want to reduce its cash dividend once it has made a commitment, as it tends to signal the company faces difficulties.

U.S. companies hold about $3 trillion offshore—about half is held in cash and investments—with the five largest owners being tech firms, according to Invesco.

The tech sector accounts for 40 percent of buybacks—Apple became the world’s first $1 trillion company, aided by buybacks of $21 billion, which have boosted earnings per share by 40 percent, according to Goldman. Tech has also been one of the best-performing sectors of the S&P 500.

Invesco believes $1.5 trillion will return to the United States, as the tax rate has been cut from 35 percent to 15.5 percent for a one-time repatriation of offshore cash.

“We believe the repatriation tax will incentivize companies to use their own overseas cash to fund buybacks and M&A in place of debt issuance,” according to Invesco.

Stock Buybacks Are Nothing but Margin Speculation

And while mergers and acquisitions are getting done, they are a lot more difficult for management to pull off successfully than buying back their shares. Paying a premium to acquire an already fully valued company needs strong justification and may even require regulatory approval.

Significant potential demand remains for stocks as firms complete their existing buyback programs, according to Goldman.

As a portfolio manager, Robinson is focused on what happens once M&A cools down. The question then becomes: Does that money get put to work in stock buybacks?

“That might be the next leg ahead in terms of share repurchases,” he said. “For that to happen near the end of the [bull market] cycle will be the last hurrah, but we’re not there just yet.”