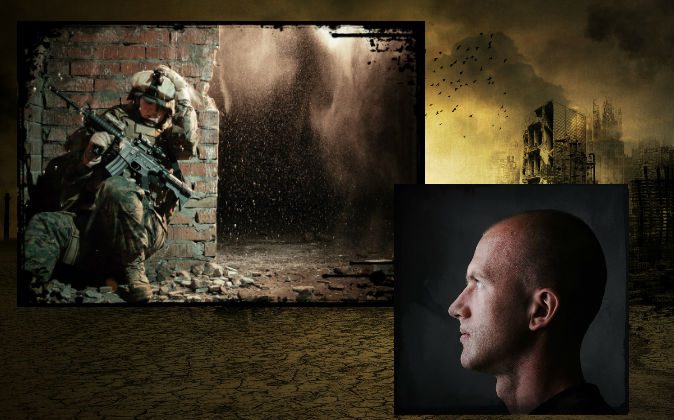 File images of a soldier in war and a man gazing. (Shutterstock*) Background: An illustration of a war-torn area. (JM Gehrke/iStock/Thinkstock)
Beyond Science

How Lucid Dreaming Could Help PTSD and Give Psychological Insights

A lucid dream is a dream in which a person realizes he or she is dreaming and is able to consciously interact with the dream. People can learn to dream lucidly through various techniques (discussed later). Some psychologists use lucid dreaming to treat trauma victims, including veterans with post-traumatic stress disorder (PTSD).

Psychophysiologist Stephen LaBerge, who received his Ph.D. from Stanford University, has also said that studying lucid dreams may greatly help us better understand the phenomenon of dreaming; unclear dreamer-recall has always been a great hindrance to studying dreams, but lucid dreamers are able to remember their dreams with greater clarity. They are also able to perform actions in dreams following the instructions of researchers.

Psychologist J. Timothy Green treated a Vietnam War veteran who had recurrent nightmares about the time he saw his best friend killed in battle.

It was the same every time. His friend would fall, and blood would flow from his neck until he finally died.

“Because his dream was always the same, I suggested he pick one particular moment in the dream and each night as he fell asleep to mentally and emotionally visualize himself back in that particular moment and remind himself that he was dreaming. He decided to use the moment when he found that his buddy had died as the signal he was dreaming,” Green wrote in an article on Therapist-Psychologist.com.

The veteran followed Green’s advice and was able to realize he was dreaming when he saw his friend. He was then able to redirect the dream, telling his friend the war was over and they were going home. The friend didn’t die this time, but instead got up smiling and walked away.

The nightmare that had haunted this man for three decades did not return.

Green hypothesizes that nightmares are either subconscious attempts to make the individual aware of something, or they are “a psychological attempt to end a difficult, even terrifying event, in a less traumatic manner.”

“During lucid dreams, the individual is able to face the frightening images in his or her dreams and have the dream end in a more favorable and less traumatic manner,” Green wrote.

Neuroscientist and science writer Bill Skaggs noted that people who dream more often are also likely to be depressed.

“People who are very severely depressed often show an excess of REM sleep—the type of sleep in which dreams occur,” he wrote in a post on Quora.com. “Reducing the amount of REM sleep is an effective way of reducing the level of depression, at least temporarily.” Whereas eliminating REM sleep—eliminating dreams—is a temporary solution, Green helps patients change the dreams for more lasting results.

The Place of Lucid Dreaming in Dream Studies

LaBerge began studying lucid dreaming more than 40 years ago for his Ph.D. at Stanford. At the time, many dismissed the phenomenon of lucid dreaming as temporary arousals from sleep. The experiments of LaBerge and others, however, showed the physical effects of lucid dreaming on the brain, eye movement, and muscle movement.

The effects on the brain set lucid dreaming apart from waking life, but also from imagining. A lucid dreamer performing a certain action, such as singing, in a dream produced different brain activity than the same person singing in waking life or imagining singing while awake.

This way, LaBerge could see where the singing began and where it ended and could examine the brain activity data for that exact time period to see how it correlated to the action.

“The fact that recall for lucid dreams is more complete than for non-lucid dreams … presents another argument in favor of using lucid dreamers as subjects,” LaBerge wrote in “Lucid Dreaming: Evidence and Methodology.” “Not only can they carry out specific experiments in their dreams, but they are also more likely to be able to report them accurately. That our knowledge of the phenomenology of dreaming is severely limited by recall is not always sufficiently appreciated.”

How to Realize You’re Dreaming

Green had directed his patient to picture a scene as he was falling asleep and to also be aware that that scene is within a dream. This is one method of training yourself to dream lucidly.

Others have suggested would-be lucid dreamers get in the habit of asking themselves in waking life, “Am I dreaming?” If it’s a habit, you’re more like to ask yourself this question in a dream and realize it is indeed a dream.

Having a predetermined signal in mind can also help. For example, in the film “Waking Life,” which is themed around lucid dreaming, the main character knows that if he flips a light switch and it doesn’t change the lighting level, he’s in a dream. Many lucid dreamers have reported that establishing similar signals for themselves is helpful.

WikiHow gives several other techniques, including marking an “A” on your palm. Whenever you see the “A,” it can remind you to ask yourself whether you’re awake.

LaBerge wrote: “As long as we continue to consider wakefulness and sleep as a simple dichotomy, we will lie in a Procrustean bed that is bound at times to be most uncomfortable. There must be degrees of being awake just as there are degrees of being asleep (i.e. the conventional sleep stages). Before finding our way out of this muddle, we will probably need to characterize a wider variety of states of consciousness than those few currently distinguished (e.g. ‘dreaming,’ ‘sleeping,’ ‘waking,’ and so on).”

*Images of a soldier and a man gazing via Shutterstock