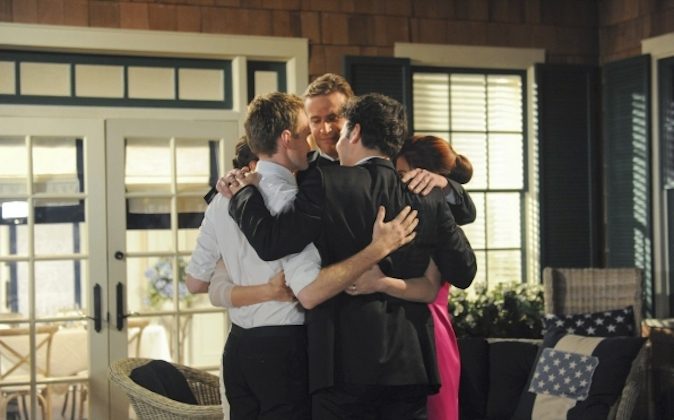 How I Met Your Mother Season 9 Finale Spoilers: Did HIMYM Episode 22 Hint at Ted and the Mother’s Fate?

How I Met Your Mother Season 9’s penultimate episode may have left clues about what will happen in the season finale.

In Episode 22, “End of the Aisle,” Ted and the Mother “team up” to calm down Robin, who is undergoing a last minute bout of wedding jitters. After Robin discovers that it was Ted, and not Barney who found her treasured missing locker, she asks Ted to elope with her as she realizes she cannot marry a man who is always deceitful. When Ted refuses, she decides to make off on her own, which leads to her first literal “run in” with the Mother.

On the groom’s side, Lily and Marshall try to convince Barney that they have kept their wedding vows as Barney struggles to write his. To their horror, Barney cites instances where they failed. Later, Marshall brings Lily to the wedding chapel, where “Lily-pad” and “Marshmallow” end up making new wedding vows in a touching scene, promising each other that they will keep on updating their vows after acknowledging that people change over time.

Meanwhile, the Mother advices Robin to take three deep breathes before committing to her decision to run away. Opening her eyes after the third breathe, Robin finds Barney standing in front of her. Barney tells Robin that his only vow is that he will forever be honest with her. Convinced, Robin walks the aisle with Barney, and the group celebrates another successful marriage.

In all, this seems like a neat, “tie-up” episode, as we finally see Robin and Barney say “I do,” Marshall delivers the final slap of Barney and Marshall’s season-transcending Slap Bet, a ring bear brings in the ring, and the Mother meets the last member of the gang (Robin).

Zap2it has suggested that Ted’s voice-over at the end of the wedding ceremony that things didn’t go too smoothly after the wedding will feed on-going theories. It has been heavily speculated that Ted or the Mother will die before their time, because of what Ted has said in Episode 20 of Season 8 (that he wished he could meet the Mother 45 days earlier to spend that extra time with her) and Episode 19 of Season 9 (Ted choked up when the Mother asked, “What mother is going to miss her daughter’s wedding?”). Another theory is that Ted has Alzheimer’s disease, which also helps explain why Ted is telling the story of how he met his wife to his kids before he forgets.

Actress Cristin Milioti has debunked the “Mother Dies” theory, but it is still in currency because show producers Carter Bays and Craig Thomas are know for subverting viewer expectations.

I don’t buy into the morbid theories surrounding Ted or the Mother.

While there are tragic events — like Marshall’s Dad’s funeral wake, for example — on the whole, How I Met Your Mother has a positive, upbeat theme. There are plot twists, sure, but they are never Game of Thrones-style, i.e. main “good guy” character dies shockingly and depressingly. Even Marshall’s father’s death channeled a number of inspiring episodes (“Last Words,” “Desperation Day,” and “Tailgate.”)

Ted or the Mother dying prematurely or suffering a debilitating disease would undoubtedly fall in line with the “ah ha caught you with a plot twist” aspect of HIMYM, but it would ruin what the entire series has been about — hope and love in the face of all odds.

After all, at the end of the aisle, “Love is the best thing we do,” says Ted.

Whatever happens, the final scene of the finale looks to be a poignant one, as director Pam Fryman tells TVGuide that “the last minute or so will really sit with you.”

“We really tried to tie up every loose ending we could think of, answer every question we’ve asked and haven’t answered,” says Fryman.