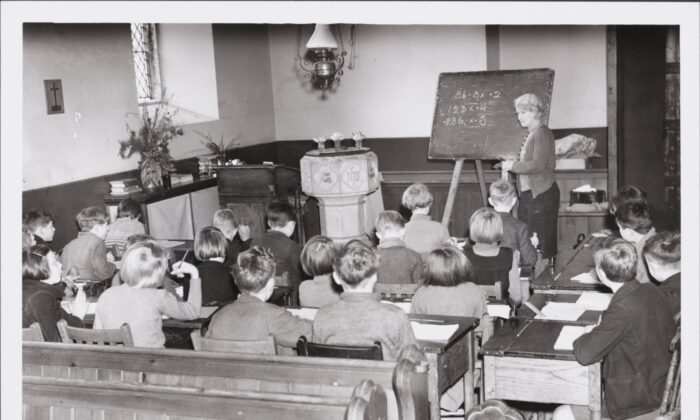 School in a church. Children evacuated from West Ham and Birmingham are using All Saints Church, Bishopswood, Ross on Wye, as a schoolroom, because of lack of accommodation in the school. The church is situated in the heart of the woods in Wye Valley, and when the weather is suitable, the children have their lessons outdoors. (Photo by Hulton Archive/Getty Images)
Viewpoints

This article is part 2 in a series examining the origins of public education in the United States.

Before government took over education in Massachusetts and eventually the rest of the United States, the state and the nation had a thriving education system that produced the best-educated population on the planet up until that time. But then, Horace Mann came along, and everything changed.

Early American schooling was dominated by homeschooling, along with a vibrant free-market education ecosystem. Outside of education at home, which is where most children learned to read, the landscape featured mostly schools run by churches and entrepreneurs, as well as private tutors.

Many of America’s Founding Fathers, like the broader population, received the bulk of their basic education at home. Even poor children could receive a formal education, though, provided largely by churches and philanthropists. The Quakers, for example, ran schools that welcomed anyone, whether they could pay or not.

And yet, long before government seized control over education, Americans were incredibly well educated. Literacy data and vast amounts of anecdotal evidence from that era show that literacy levels were significantly higher in the mid-to-late 1700s than they are today. Modern studies on the subject confirm that.

Most children learned to read at home before ever stepping foot in a formal school. And they did it using simple, cheap primers that were vastly superior to almost everything in use today when it comes to reading instruction.

Then, everything changed. An ambitious lawyer-turned-politician-turned-educational-reformer with almost no experience as an educator came on the scene. He had grandiose ideas and messianic delusions that would eventually see the complete restructuring of the entire educational system in the United States. His name: Horace Mann.

In the first article in this education series, The Genesis of Public Schools: Collectivism and Failure, the almost unknown origins of the government-school movement in America were exposed. It all began with with a now-obscure communist named Robert Owen and his failed collectivist colony in Indiana known as “New Harmony.”

Owen’s early 19th-century writings on education inspired the king of Prussia to establish a national government education system based on statist ideals—education of the state, by the state, for the state. Prussia’s totalitarian system included mandatory schooling for all children, powerful police forces to deal with non-compliance, segregation of children by age, instilling of a statist mindset in all children, and more. It was the first system of its kind anywhere on the planet.

But it would not be the last.

The Owen-inspired Prussian system captured the imagination of Mann and his wealthy associates. These mostly Harvard-educated elites were increasingly abandoning the Orthodox Christianity that defined early America in favor of liberal Unitarian and secular ideas about man and nature. They had an obsession with reforming man and society in their own image.

As a politician in the state legislature, Mann worked hard to expand the size and scope of government across all fields. But by the mid-1830s, the educational reformer was ready to advance Big Government in the United States in an unprecedented manner: the total takeover of education by the state.

With a governor friendly to their ideas in place, Mann and his wealthy backers launched their transformative education plan in 1837. This included setting up a state “Board of Education”—the first in America—that would oversee education throughout the commonwealth. Mann was chosen to serve as the board’s first secretary.

It was all supposed to be based on the Prussian model launched two decades earlier. According to Mann himself, one of the primary goals of the new education regime he was constructing in Massachusetts would be to “equalize the conditions of men” and eradicate poverty—in essence, the same collectivist ideology espoused by Owen and his disciples decades earlier.

The keystone of the system envisioned by Mann was a network of government-run “seminaries,” or “normal schools,” that would train all Massachusetts teachers to teach what the state wanted taught. It didn’t take long for the state-sponsored normal schools to begin indoctrinating future teachers with Mann’s naturalistic views on religion, including the introduction of the quack phrenology book “The Constitution of Man.”

Even though Christianity and the Reformation had fueled the spread of education, Mann, like Owen before him, only more quietly, rejected the Bible and Orthodox Christianity, putting him far outside of the mainstream in 1800s America. Under the guise of removing “sectarian” ideas, he worked hard to destroy the Christian roots of education across Massachusetts and beyond.

Mann shared Owen’s views on the nature of man, too. The prevailing Calvinist worldview in early America held that man was innately and totally depraved, and so government must be strictly limited in its powers. Men like Owen and Mann, however, believed people were basically good, and that the right set of policies and education would perfect mankind to create Utopia.

Mann and his cohorts believed fervently in the power of big government to wisely guide mankind toward an idyllic future. He regularly used lofty rhetoric about the benevolent, paternalistic role of government that would become the all-too-familiar siren song of the 20th century’s most ruthless totalitarians.

The views of Mann and Owen ultimately prevailed over the traditional understanding of education that had been refined and perfected over the centuries. But while Mann predicted that government schools would ultimately render obsolete “nine tenths of the crimes in the penal code,” in reality, their proliferation coincided with a downward spiral that would see crime and immorality explode to unprecedented heights.

Mann’s attitude toward other people’s children was bizarre, too, even by today’s standards. In his 1867 “Lectures and Annual Reports on Education,” Mann claimed that those engaged in the “sacred cause of education” were “entitled to look upon all parents as having given hostages to our cause.” Shortly before his appointment as education secretary, he gushed at the mere thought of having “the future minds of such multitudes” dependent in some way on him.

While Mann is often described correctly as one of the founders of public education in the United States, the full story is slightly more complex. Prior to Mann, Massachusetts did have some government intervention in education, including some “common schools” with roots in the early 17th century Puritan Bible colony. That history is well documented.

But regardless of what Mann might have told the conservative public at the time, what existed prior was completely different from what Mann introduced.

The premise was this: One “chief project of that old deluder, Satan” is to “keep men from the knowledge of the Scriptures.” With that in mind, lawmakers decided that towns needed to ensure everyone was capable of reading. So towns with more than a certain number of inhabitants were ordered to make sure children could read—the alternative being satanic deception rooted in ignorance of the Bible.

The modern conception of “separation of church and state” was completely alien to the Puritan founders, who laid the foundations for what would eventually become the United States of America. For them, the state was a divine institution ordained by God charged with carrying out God’s commands—primarily punishing evil, as defined by God. And that is why they felt it proper to use both church and state—inseparable institutions, in their mind—to educate children.

But even in Massachusetts, one of just a handful of jurisdictions that had any government involvement in education at all, the free market and Christianity still dominated the educational scene by the early to mid-1800s. Common schools were in steep decline, as the overwhelming majority of parents chose to educate their children at home and in vastly superior private schools.

At least, that was the case until Mann came along and created America’s first ever state-controlled, bureaucratic, property-tax-funded government school system. At the same time that was occurring, along with a militant secularization of education, Mann and his cohorts waged a campaign to demonize the phenomenal private academies across the state, as well as the parents who sent their children there.

Until Mann, across America and the broader Western world, education was regarded as a process of giving children intellectual tools and moral instruction. The primary end was to know God, with developing the intellectual abilities of children a secondary purpose.

After Mann, though, there was a radical transformation. So-called progressive education, as it came to be known, was the new norm. Under his vision, schools were to serve as tools for re-shaping human nature and society to achieve a heaven-on-earth ideal.

One of the most far-reaching innovations to enter the schools under Mann was the “whole word” method of teaching reading, as opposed to the phonics that had been used for thousands of years. It ended in total disaster. That story, which is crucial to understanding the modern illiteracy crisis, will be recounted in an upcoming article in this education series.

After unleashing government education on the people of Massachusetts, Mann went to Prussia to gain a deeper understanding of that regime’s centralized indoctrination system. Upon his return to the United States, he beat back conservative attackers upset about his schemes. Then he traveled the country like an evangelist shilling for government schools, successfully promoting the Prussian system in state after state.

The Utopians believed government schools would make Prussia and other jurisdictions that implemented them into paradises of enlightenment and progress. The reality, unfortunately, has not been nearly so nice. In Prussia, the statist educational system culminated in the total transformation of Germany into one of the most despotic horror shows in human history.

It’s not working out well for Americans today, either. Stay tuned to this space for more.