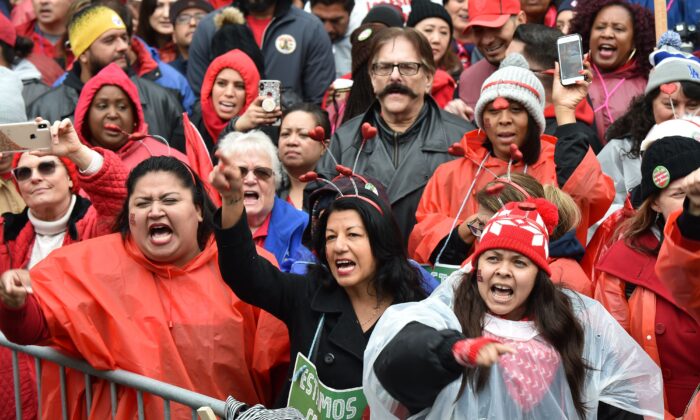 The Genesis of Public Schools: Collectivism and Failure

This article is part 1 in a series examining the origins of public education in the United States.

Standardized tests show Americans are getting dumber and dumber with each passing year. And polls now consistently show that more than half of young Americans today prefer socialism over freedom. This is obviously not sustainable—at least if the United States is going to survive as a free society.

It’s also not an accident.

To solve this crisis, it’s essential to have an understanding of where public schools came from and what existed prior to their establishment. After all, before the proliferation of government schools, Americans were the best-educated people on the planet—just consider the Founding Fathers, and the “Federalist Papers,” to get a sense of the level of education that once prevailed in America.

The history of how the government was able to take over—and the characters behind that effort—is almost incredible. Much of that shadowy story, though, is barely known today, even among educational experts. That’s a problem, and potentially an existential threat.

When examined honestly, the history of public education—and a study of the key men who laid the foundations for the system that now exists—reveals a long-term plan by Utopians to totally re-shape humanity and civilization along collectivist lines. This agenda has been remarkably successful thus far, as the polling data show.

Everybody involved in education knows about John Dewey and Horace Mann, of course. These two socialist luminaries are almost universally credited with having created the modern public education system in the United States. Their backgrounds and views will be addressed in upcoming articles in this series on education.

But the true story of government schools has its origins long before Mann became the first education commissioner of Massachusetts, with his radical plan to have the government take over education, using the Prussian model.

Much of the earlier history of public schools—before Mann picked up the baton—remains not just obscure, but practically unknown. Were it not for the meticulous research of the late Dr. Samuel Blumenfeld, a passionate educator who devoted six decades of his life to studying education and the science of reading, it might still be awaiting discovery in dusty old libraries and university archives in the United States and Europe.

The real story of government education can be traced to a long-forgotten communist commune in Indiana called “New Harmony,” and its eccentric founder. Established in the 1820s by Robert Owen, a Welsh Utopian who rejected Christianity and private property, the idea behind the settlement was to show the world that collectivism was actually superior to individualism.

The utter implosion of this experiment in collectivism, which preceded Karl Marx’s “The Communist Manifesto” by some two decades, is the reason those early advocates of collectivism made the adoption of mandatory government schools for all children their top priority. The thinking was that the commune failed not because of anything wrong with communism or collectivism, but because the people living there had not been properly socialized and “educated” to be collectivists from childhood.

Just like Marx and Engels would claim decades later, the Owenites believed that what was needed were government schools that would take over child rearing from the earliest possible ages. And so that became their sole focus.

Among other ideas, Owen rejected the prevailing Calvinist views of America in that era. These held that man is innately depraved and that his heart is desperately wicked. Owen believed the reason men were evil, selfish, individualistic, and violent was the result of their upbringing, not their nature. He believed human nature was essentially good, and that a collectivist education would help create what would later come to be known as the “New Soviet man.”

Even before he set up New Harmony, Owen had well-developed ideas on the sort of education that would be needed to build his imagined Utopia. He published some of his views on this subject in 1813 in a collection dubbed “A New View of Society or Essays on the Formation of the Human Character.”

“It follows that every state, to be well governed, ought to direct its chief attention to the formation of character, and that the best-governed state will be that which shall possess the best national system of education,” Owen declared.

“Under the guidance of minds competent to its direction, a national system of training and education may be formed, to become the most safe, easy, effectual, and economical instrument of government that can be devised. And it may be made to possess a power equal to the accomplishment of the most grand and beneficial purposes.”

Years later, Owen explained in his own autobiography that his essays on education had been given to the king of Prussia by the Prussian ambassador. According to Owen’s account, the Prussian ruler had “so much approved” of these ideas that he ordered his own government to create a national education system based upon them. And thus, the Prussian system of education—schooling of the state, by the state, and for the state—was officially born.

This Owen-inspired totalitarian model of schooling, which segregated children by age and coerced parents to surrender their children to the state for “education,” would eventually become the model for Massachusetts—and then the nation as a whole. And the history would gradually be forgotten as the rotten fruit of this system began to undermine traditional American values and ideas.

Long before the horrific communist slaughters and genocides of the 20th century, Owen and his ideas found enthusiastic supporters among certain segments of the American elite. One of Owen’s early disciples was Orestes Brownson, a prominent New England writer and editor who became totally dedicated to the cause.

Unlike Owen, who went to his grave passionately believing that simply getting control of the children through government schools would produce Utopia, Brownson eventually rejected collectivism, converted to Catholicism, and blew the whistle on the schemes of his former associates.

“The great object was to get rid of Christianity,” Brownson explained in “An Oration on Liberal Studies” after seeing the light. “The plan was not to make open attacks on religion although we might belabor the clergy and bring them into contempt where we could; but to establish a system of state, we said, national schools, from which all religion was to be excluded, in which nothing was to be taught but such knowledge as is verifiable by the senses and to which all parents were to be compelled by law to send their children.”

Today, that is the norm. But back in the early- to mid-1800s, it would have been inconceivable to average people.

The first element of the plan, Brownson revealed, was to establish a system of government-controlled schools. “For this purpose, a secret society was formed,” Brownson continued, saying the plan was to model it on the Carbonari in Europe.

“The members of this secret society were to avail themselves of all the means in their power, each in his own locality, to form public opinion in favor of education by the state at the public expense, and to get such men elected to the legislatures as would be likely to favor our purposes.”

While Brownson didn’t know how far the secret society’s tentacles extended, he did know that a “considerable portion of the State of New York was organized.” He knew that, he said, because “I was myself one of the agents for organizing it.”

By the very nature of “secret” societies, much of the history of this network remains concealed. But it is obvious that they found great success in advancing government schools. In less than a century, government education proliferated all across the United States.

Stay tuned to this space for more of that incredible history in the weeks and months to come.