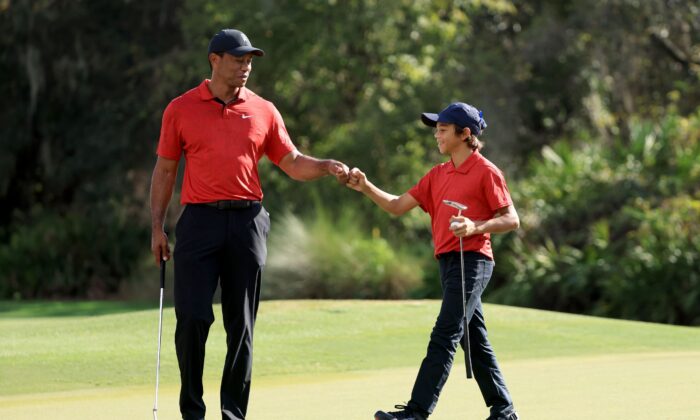 Tiger Woods and Charlie Woods celebrate a birdie on the 12th hole during the final round of the PNC Championship at the Ritz Carlton Golf Club Grande Lakes in Orlando, Fla., on Dec. 19, 2021. (Sam Greenwood/Getty Images)
Stocks

How Have Golf Stocks Performed Since Tiger Woods Won The Masters In 2019?

Tiger Woods is expected to make his return to the Masters this week, 14 months after a car accident that left many questioning if he would be able to compete again. The return of Woods could provide a big boost to the golf sector, bringing people back to watch and potentially play the game due to one of the greatest golfers of all time.

Throughout his career, Woods has won 15 major championships in golf, including five Masters titles. His 2019 Masters win was the first major championship by Woods since 2008 and remains the last major title won by the legendary golfer.

The 2022 Masters has already seen elevated demand for tickets and could result in a big boost in television viewers for both Paramount Global and Walt Disney Co., which will air coverage on their respective CBS and ESPN channels.

Woods returning to the sport could also provide a boost to golf courses, golf apparel and golf equipment.

The 1997 Masters win by Woods was a huge spark for the golf sector. The COVID-19 pandemic and his 2019 Masters win also led to increased demand for golf equipment and tee times over a two-year period between 2019 and 2021.

With Woods fully expected to compete at the 2022 Masters, investors could look at some golf related stocks as potential plays for the week and also for the quarters after Woods’ return, with a likely short-term spike in demand.

During practice sessions, Woods wore Footjoy shoes, which prompted a heated debate on Twitter Inc , given Woods’ relationship with Nike Inc. The move was puzzling to many, as Nike is a major sponsor of Woods and stuck by him after the car accident while others moved on.

It appears wearing the shoes from Footjoy may have to do more with comfort than making a statement, and Nike doesn’t seem that worried.

“Like golf fans around the world, we are delighted to see Tiger back on the course,” a Nike spokesperson told ESPN. “As he continues his return, we will work with him to meet his new needs.”

Footjoy is one of several brands owned by Acushnet Holdings Corp. Acushnet, which has the appropriate GOLF ticker, also owns the Titleist brand, one of the biggest in the sport.

Callaway Golf  is another pure-play bet on golf with ownership of several equipment and apparel brands and also the owner of the Topgolf indoor golf entertainment brand.

Dick’s Sporting Goods Inc is the owner of the Golf Galaxy retail brand along with its flagship stores that also sell golf merchandise.

While less of a pure play, Nike could also benefit from increased exposure to Woods during the 2022 Masters.

Here’s a look at how golf stocks have performed since the 2019 Masters. Woods won the 2019 Masters on April 14. The following is based on the opening price of the stocks on April 15, 2019, and the price on April 5, 2022, tracking nearly a three-year performance.