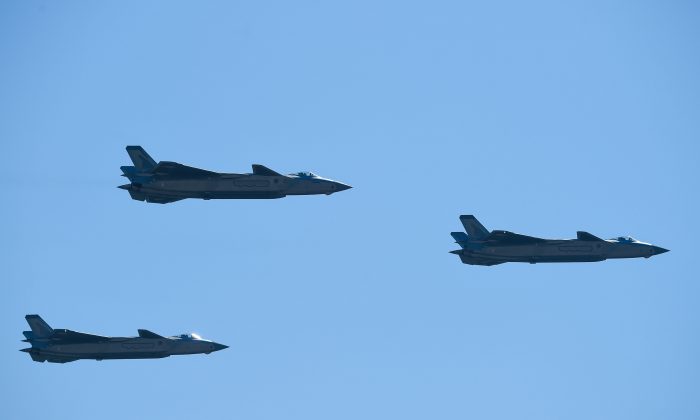 How good is China’s most advanced fighter jet, the J-20? The J-20 is a “fifth-generation” combat aircraft, which ostensibly puts it in the same league as the U.S. F-22 and F-35.

Fifth-generation fighters have certain common characteristics: very low visibility (stealth), the ability to fly at supersonic speeds without using an afterburner (called supercruise), and most importantly, a highly advanced radar and suite of avionics and onboard computers for “networked data fusion,” enabling situational awareness in the battlespace.

Theoretically, a fifth-generation fighter jet is nearly invisible to ground-based air defenses and other aircraft, and can detect and attack threats from far away.

Technologically, fourth-generation and 4G+ fighters date from the 1970s and 1980s, although most have undergone significant upgrades over the years. All are multirole aircraft, capable of both air-to-air and air-to-ground missions. They’re highly maneuverable, use fly-by-wire flight controls, and can launch “fire-and-forget” active radar-guided air-to-air missiles. 4G+ fighters, in addition, possess a modicum of stealth and improved avionics, such as an active electronically scanned array (AESA) radar.

In general, most fourth-generation and 4G+ fighter jets are basically the same. A Venn diagram of their capabilities would show a lot of overlap. The difference is mainly in the number of engines they have (one or two).

So how does the J-20 stack up? In the first place, the J-20 is certainly the best fighter jet in the People’s Liberation Army Air Force (PLAAF), but this is a skinniest-kid-at-fat-camp kind of argument. The “best of the rest” of the PLAAF fighter force are the J-10—an indigenously developed combat aircraft initiated in the 1980s—and the J-11, basically a reverse-engineered Soviet Su-27, a plane that first flew in the 1990s.

Although heavily upgraded over the years, the J-10 and J-11 are barely fourth-generation fighters. Going up against comparable combat aircraft flown by better-trained pilots (such as Taiwanese F-16s or Japanese F-15s), these planes would be in a decidedly perilous situation.

Hence the PLAAF’s need for the J-20. According to the Washington-based Center for Strategic and International Studies (CSIS), the J-20 is an advanced multirole stealth fighter fulfilling both air-to-air and air-to-ground combat roles.

CSIS quotes a 2016 report by the U.S. Department of Defense that states that “the J-20 represents a critical step in China’s efforts to develop advanced aircraft to improve its regional power projection capabilities and to strengthen its ability to strike regional airbases and facilities.”

A U.S. Naval War College report adds that the J-20, once deployed, would “immediately become the most advanced aircraft deployed by any East Asian Power.”

That said, what we know—and just as importantly, what we don’t know—about the J-20 throws a bit of cold water on these assessments. In the first place, details about the J-20’s design undercut assertions about its apparent stealthiness. For one thing, the plane is huge—more than 2 meters (about 6.5 feet) longer than the U.S. F-22—and it uses canards (winglets) at the front of the airframe for improved maneuverability. Both of these features make the J-20 more detectable by radar.

Moreover, the J-20 appears to lack nozzle designs that reduce the heat signature coming from its engine exhaust. Therefore, the J-20 may only be stealthy “from the front,” according to aviation expert Richard Aboulafia.

The J-20 is also likely underpowered. Early versions used a small Russian engine, which was later replaced by the indigenous WS-20 turbofan; this engine, however, has had its share of teething problems. It’s possible, therefore, that the J-20 is incapable of supercruise.

Secondly, what we can’t see should also leave us questioning the aircraft’s capabilities. In particular, we can’t know what kind of radar, sensors, avionics, and computers are internal to the J-20 or how good they are; we mainly infer from what we know about other fifth-generation fighters.

CSIS, for example, claims that the J-20 is “slated” to carry a variety of advanced systems, including “an [AESA radar], a chin-mounted infrared/electro-optic search and track sensor, and a passive electro-optical detection system that will provide 360-degree spherical coverage around the aircraft.” This assessment, however, is based on the argument that “comparable systems” can be found on the U.S. F-35.

It’s impossible, short of espionage, to know how good the systems inside the J-20 actually are (Western intelligence agencies might be privy to some of this information, but they’re not talking). It’s highly likely, however, that avionics on the F-22 and F-35—especially those systems for sensor and data fusion, situational awareness, and connectivity—are head-and-shoulders above those of the J-20.

Consequently, analysts such as Aboulafia and John Venable of Heritage Foundation believe that the U.S. fifth-generation fighter would easily best the J-20 in a modern air-to-air contest, which is based on long-range “first look/first shoot” kinds of engagements, rather than any kind of “Top Gun” dogfight.

The F-22, with its superior stealth, radar, and precision weapons, would “destroy [the J-20] instantly,” according to Aboulafia.

It’s likely that the Chinese are aware of the J-20’s shortcomings, and perhaps that’s why the PLAAF has so far fielded only “limited numbers” of the aircraft. Still, it’s as dangerous to “under-guesstimate” the potential of the J-20 as it is to exaggerate its capabilities.

The PLA has been able to appreciably narrow its military-technological gap with the West over the past 20 years or so. It’s incumbent upon the West, therefore, to keep moving the “technological goalposts” in order to stay comfortably ahead.