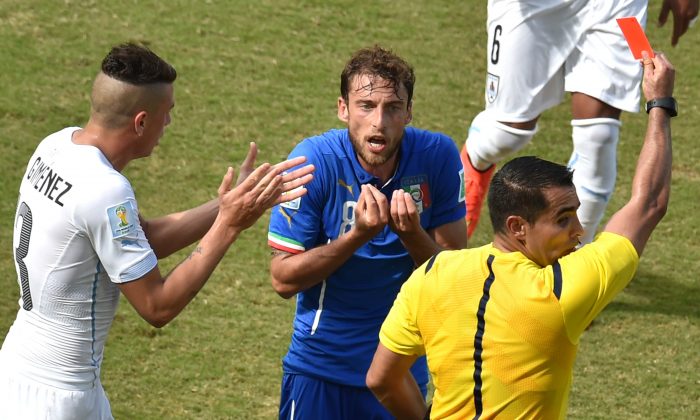 Italy's midfielder Claudio Marchisio(C) reacts as he is shown a red card by Mexican referee Marco Antonio Rodriguez Moreno during a Group D football match between Italy and Uruguay at the Dunas Arena in Natal during the 2014 FIFA World Cup on June 24, 2014. (YASUYOSHI CHIBA/AFP/Getty Images)
Good to Know

How Do You Get a Yellow or Red Card in Soccer? FIFA Rules for Football Fouls, Misconducts

What are yellow and red cards in soccer, and when can a referee give them?

Yellow and red cards are given to football players who commit fouls. A yellow card is the referee’s way of cautioning a player for a misdemeanor, while a red card means that a player has transgressed the acceptable laws of the game so badly that he has to leave the game.

What determines the color of the card depends on whether the foul is reckless and/or are carried out with excessive force.

A reckless foul is one that is carried out with the offender having no thought to the danger and consequences of his opponent. Players will be shown a yellow card if the referee deems their foul a reckless one. If a player receives two yellow cards in a game, he will be also shown a red card, and get ejected from the game.

(Oscar Duarte of Costa Rica challenges Jose Cholevas of Greece leading to a second yellow card and being sent off during the 2014 FIFA World Cup Brazil Round of 16 match between Costa Rica and Greece at Arena Pernambuco on June 29, 2014 in Recife, Brazil. (Photo by Quinn Rooney/Getty Images)

Yellow cards can also be shown for illegal handballs (i.e. the referee or his assistants deem that a player deliberated handled the ball), unsporting behavior such as diving (simulating a foul by going to ground without contact from an opponent), dissent (arguing with the referee both verbally or non-verbally), and removing one’s shirt during the game as a form of celebration.

A foul involving excessive force is self-explanatory; the offender commits himself to an action that injures or will injure an opponent. Referees will give a straight red card for dangerous fouls.

Typically, all tackles from behind and two-footed tackles are given straight red cards. All forms of violent conduct (fighting, punching, kicking, biting, etc.) from players toward their opponents are also grounds for dismissal.

Cards can also be handed out to substitutes, the coach/manager, and other team officials seating on the bench.

(Australian referee Benjamin Williams shows a yellow card to Costa Rica’s midfielder Oscar Esteban Granados sitting on the bench during the round of 16 football match between Costa Rica and Greece at Pernambuco Arena in Recife during the 2014 FIFA World Cup on June 29, 2014. RONALDO SCHEMIDT/AFP/Getty Images)

See the FIFA rules for fouls and misconduct for more information.