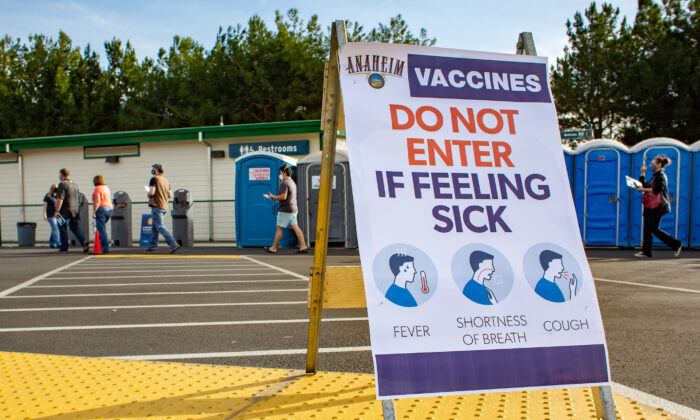 A COVID-19 vaccination center is set up in a parking area of Disneyland in Anaheim, Calif., on Jan. 13, 2021. (John Fredricks/The Epoch Times)
Orange County Community

How Did the Pandemic Affect Orange County Cities’ Finances?

The COVID-19 lockdown was ordered by Gov. Newsom on March 4, 2020. Seeing South Coast Plaza’s parking lot empty during the middle of the day was an eerie experience. Losing sales tax revenue certainly impacted Costa Mesa. Having the Angels play without fans in the seats, a convention center not hosting conventioneers or Disneyland not admitting guests had significant fiscal reverberations for the city of Anaheim.

These first three-plus months of the pandemic, through the end of their fiscal years on June 30, 2020, had a major impact on Orange County’s cities.

How did they fare for the following twelve months, through the end of their fiscal year of June 30, 2021? The graph below provides the hard data.

With their Annual Comprehensive Financial Reports (ACFR), we go to the Basic Financial Statements and obtain the Unrestricted Net Position (UNP) for Governmental Activities and divide it by the population of the city, provided in the notes (some cities used the population for the prior fiscal year). Dividing the population into the best temperature gauge of a municipality’s current financial situation, the UNP, provides a metric from which to rank Orange County’s 34 cities.

As can be seen from the graph, Orange County’s cities weathered COVID-19 rather well. Overall, there was not much movement in the rankings. The cities of Stanton and San Juan Capistrano were able to move up three places, with the Mission city’s per capita improving almost four-fold and Stanton moving into the top-10.

On the other hand, the city of Villa Park dropped four places, with a 31 percent drop in its per capita statistic. The city of Westminster dropped three places, finding itself now in the bottom ten, and garnering significant media attention for its poor fiscal condition. It has dealt with council recalls, and it’s been reported that police are stationed at council meetings—not to hold back the public, but to keep councilmembers from attacking each other.

The massively impacted city of Anaheim dropped one position, thanks to a 15 percent increase in its Unrestricted Net Deficit, growing by $261 per resident. It is now in 33rd place. Costa Mesa improved by a hair over 1 percent, but continues to be the longstanding bottom dweller on the list.

The city of Brea moved up one position, thanks to Anaheim’s turmoil, and by reducing its per capita deficit by nearly 12 percent. How did COVID impact this city? It’s ACFR mentions the term 24 times. Thanks are provided to the federal government for $5.2 million in funds received through the American Rescue Plan Act (ARPA). The city also received $600,000 in funding from the Coronavirus Aid, Relief, and Economic Security (CARES) Act. Despite the lockdown, its sales tax revenues increased by some $1.9 million, while many of its departments had reduced activity, finding decreases in budgeted expenditures.

The governor’s lockdown closed businesses and increased unemployment. But the coronavirus pandemic was not the only concern facing Brea and other cities. Increasing contribution requirements to its pension system, the California Public Employees’ Retirement System (CalPERS), the ongoing loss of retail sales to internet transactions, and cost-of-living increases.

Thanks to the lockdown, cities reliant on tourists and business travel saw a drop in transient occupancy tax revenues, a government fee paid on top of the room rate at hotels.

The top ten cities stayed relatively in place, with Stanton bumping Aliso Viejo, which had a more than 11 percent drop in its UNP. The bottom ten saw Westminster bump up the city of Newport Beach, which probably has the most aggressive commitment to reduce its unfunded actuarial accrued liability for its employee pension liabilities, the main reason over 40 percent of the cities find themselves in a deficit position.

After this historically difficult year, more than half of the cities improved their per capita metrics. Those with unrestricted net assets that rose by more than 10 percent are Lake Forest, Dana Point, La Palma, Laguna Niguel, Rancho Santa Margarita, and San Clemente. Five cities even improved their positive positions by more than 20 percent: Laguna Beach, Tustin, Stanton, San Juan Capistrano, and Mission Viejo.

The cities with positive UNPs to watch are Aliso Viejo and Villa Park. Let’s hope 2020-21 was an anomaly and not a trend. For those in negative territory and dropping more than 10 percent are Westminster and Anaheim, with Placentia dropping more than 20 percent.

Residents of cities in the bottom half need to ask their city councils what the 10-year strategic financial plan is to dig out of the holes. Why is Costa Mesa’s deficit per capita more than 27 times greater than that of Yorba Linda? Especially when Costa Mesa has South Coast Plaza, one of the largest sales tax producers in the nation. Serious questions need to be asked. And citizens need to get more active.

After reviewing my rankings of California’s 482 cities, the Solano County Grand Jury issued a report about the city of Vacaville’s fiscal distress. You can bet its citizens are more alert now. In a few months you’ll have to ask your city council incumbents running for reelection about their city’s balance sheet, as well as of those candidates challenging them, about what they plan to do to make their cities more sustainable for the coming generation.