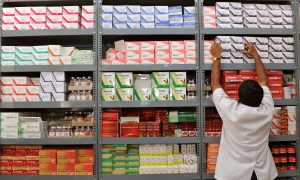 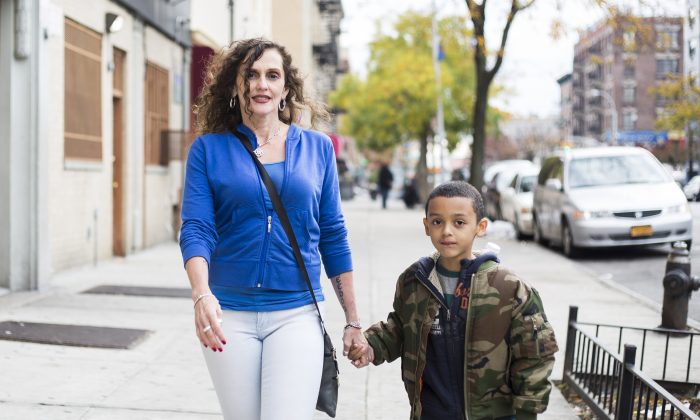 Lisa Ortega who has been drug-free since she completed her diversion program 25 years ago with her 7-year-old son Carlos Sabater in the Bronx, New York, on Nov. 1, 2015. (Samira Bouaou/Epoch Times)
New York

NEW YORK—A bullet pierced Officer Randolph Holder’s forehead and killed him during an East Harlem shootout on Oct. 20. The alleged shooter, Tyrone Howard, was a PCP addict who almost re-entered prison after he pleaded guilty to dealing drugs in 2014; but a judge granted Howard a chance to go to an 18-month drug treatment program instead.

Howard began attending the diversion program last May, which provided treatment to nonviolent drug offenders as an alternative to incarceration. If he completed the program, his guilty plea would be withdrawn and his charges would be dismissed. But Howard stopped going to rehab in August. He went on to kill an officer.

Holder’s death highlights a contentious debate about prison reform. A 2011 study on recidivism by Pew Center on the States found that more than 4 out of 10 American adult offenders return to prison within three years of their release.

Meanwhile, Mayor Bill de Blasio, who has supported recent prison reform initiatives such as replacing bail with supervised release for low-income and nonviolent criminals in New York, has called for judges to be stricter when deciding on who is eligible for diversion programs.

The tragic shooting of Holder raised questions about how drug courts vet for diversion program participants. While there are flaws with the vetting system that need to be addressed, prison reform advocates worry that potential changes will make it more difficult for people who could benefit to access rehab.

First, court clerks evaluate each person charged with a criminal offense to determine if he or she is eligible for a court-monitored substance abuse treatment. If a person is qualified, the prosecutor’s office goes on to review the case.

According to NYC Drug Courts, a potentially eligible criminal also receives a clinical assessment and sometimes a urine test. Finally, a judge decides whether this person is too violent to be released back into society.

Those who are convicted of violent crimes, such as robbery or manslaughter, are not eligible for drug treatment programs. Depending on the judge and the circumstances of the case, people like Howard, who have been arrested but not convicted for violent crimes, may be eligible to go to rehab instead of prison.

Howard was arrested for a 2009 shooting that wounded two. He was also a suspect in a shooting in Harlem on Sept. 1, which occurred after he stopped attending rehab. But he was never convicted for either case.

Although Howard also committed an armed robbery as a teenager, he was never convicted of a violent crime as an adult. Hence, Justice McLaughlin considered him eligible for the diversion program in December 2014 and the drug court that reviewed his case subsequently agreed.

The prosecutor argued against Howard’s eligibility for diversion, but Justice McLaughlin went ahead with it, noting in his decision that prior prison terms hadn’t helped, “I’ve decided maybe out of frustration and exasperation, why not?”

A judge ruling against the recommendations of a prosecutor isn’t unheard of.

Of the 731 cases heard in NYC drug courts in 2012, a judge admitted someone over objection from a prosecutor 14 percent of the time, reported WNYC.

The city has been relatively strict when considering which drug offenders are eligible to attend drug treatment in lieu of prison.

According to the latest data from the Criminal Court of the City of New York, there were 4,311 defendants who had their cases heard in NYC drug courts for evaluation in 2013.

Of those defendants, 533 were deemed nonviolent and eligible for drug treatment instead of prison. Of those 533 participants, more than half completed the program.

The recidivism rates for people who attend diversion programs are lower than those who go to prison.

A U.S. Government Accountability Office report to congressional committees in 2011 found that nationally, drug rehab participants who completed their programs had recidivism rates that were 58 percent lower than those who served time instead.

After Holder’s death, de Blasio called for judges to consider whether a criminal is likely to flee and not complete drug rehab.

“The death of Officer Randolph Holder was a clear and tragic signal that we must ensure dangerous individuals with long criminal histories do not walk our streets,” de Blasio said in a statement.

It is unclear how risk of flight will be determined, and advocates worry that it may unnecessarily limit the number of people eligible for diversion programs.

“It’s counterproductive,” said Five Mualimm-ak, the director of a collective that advocates for prison reform called Incarcerated Nation Corp. “We need alternatives to incarceration, but de Blasio is making it more difficult.”

That same program that Howard failed made all the difference for Lisa Ortega, a former drug addict who has been clean ever since she completed her 24-month diversion program.

When Ortega was struggling to survive as an 18-year-old single mother with a ninth grade education, she turned to selling drugs. “I had no money to pay rent, no food to feed children,” she recalled. Her drug sales landed her two felony drug charges in 1990.

Ortega was sent to a diversion program that treated participants in a highly structured and supervised residential environment. The program also included group and individual counseling sessions.

Ortega said her experience in a diversion program not only empowered her to rehabilitate from drugs, but also helped her understand her value.

“It gave me insight to myself,” she said. “It gave me access to therapy and tools that were able to help me go through life drug-free and be an asset to my community.”

After completing the diversion program, Ortega got a job as an organizer at a nonprofit called Mothers on the Move on her own. She also went on to become a home health aid.

“Had I gone to jail … I might not have figured out who I was,” she said. “I feel grateful for that diversion. I feel bad for people who don’t have the opportunity to go a diversion program.”