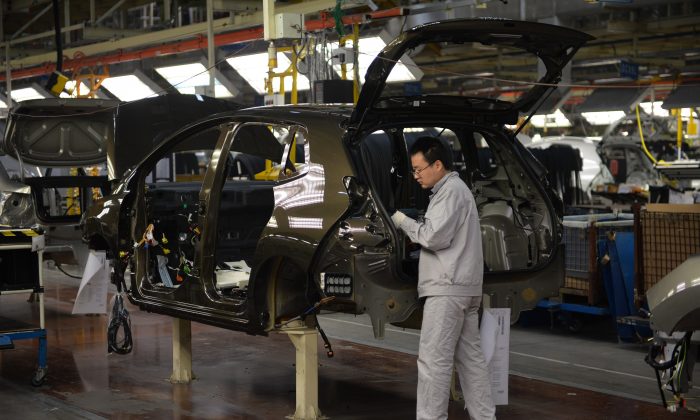 Research shows that the political ideology of communism restricts innovation, which is the panacea for economic growth and long-term prosperity today.

In broad strokes, the communist tenets of state ownership of business and property, under strict government supervision, lead to a risk-averse culture. People in these societies work in an environment that discourages ambition and creativity. This is the polar opposite of the conditions that foster innovation.

Stronger protections for intellectual property (IP) are found in more innovative economies, according to the report. In contrast, weak IP protection hinders long-term strategic innovation and development in economies.

“A robust national IP environment correlates strongly with a wide range of macroeconomic indicators that fall under the umbrella of innovation and creativity,” according to the GIPC report.

Countries that lead in intellectual property are free market, capitalist economies, such as the United States and United Kingdom. First-world, democratic countries in Europe and Asia also rank highly.

The key to whether China can become a country of innovation is tied to the respect of property rights and the rule of law.
— Ma Guangyuan, independent Chinese economist

For China, the report singles out historically high levels of IP infringement.

Internationally, China and Russia are the “usual suspects” of cyberespionage against other countries. Stealing IP, the infrastructure for innovation, is one way these nations heavily influenced by communism try to stay competitive globally.

According to the Organisation for Economic Co-operation and Development (OECD), not a single Chinese university ranks among the world’s top 30 in terms of the most cited scientific publications.

Universities are breeding grounds for young, innovative minds. Within their walls, ideas are born and debated, companies are formed, and research is conducted. They are key components of a healthy innovation ecosystem.

Harvard Business School professor William Kirby wrote about the strict limitations within Chinese universities on what faculty can discuss with students.

“Faculty could not talk about any past failures of the Communist Party,  either in a classroom or with students. They could not talk about the advantages of separation between the judicial and executive arms of the government,” Kirby wrote in an article for the Harvard Business Review (HBR) in 2015.

“It is hard to overstate the impact of these strictures on campus discourse and the learning environment,” he wrote.

Communism is known for its corruption and cronyism. An editorial published in the journal Science noted that the bulk of the Chinese government’s research and development (R&D) budget is allocated according to political connections rather than merit or the judgment of independent review panels.

McKinsey’s 2015 report “Gauging the Strength of Chinese Innovation” noted that the impact of innovation on China’s economic growth declined over the past five years to the lowest level since about 1980.

China has a massive consumer market and a government willing to invest huge sums of money—nearly $200 billion on R&D in 2014—and its universities graduate more than 1.2 million engineers each year.

Communism as a political ideology is as bankrupt as ever.
— Garry Kasparov, former world chess champion

Clearly, China has much potential, but it is the United States that has taken the lead in technological dominance.

“The country [China] has yet to make an internal-combustion engine that could be exported and lags behind developed countries in sciences ranging from biotechnology to materials,” according to McKinsey, in an article introducing the report.

In a 2016 article for HBR, Anil Gupta and Haiyan Wang wrote, “While almost all Western technology giants have R&D labs in China, the bulk of what they do is local adaptation rather than developing next generation technologies and products.” Gupta and Wang are co-authors of the book “Getting China and India Right.”

The Chinese Communist Party requires every company of more than 50 employees to have one of the Party’s representatives on-site. Larger firms must have a Party cell.

Lately, the Chinese government has been trying to spur a wave of new startups by providing them with generous subsidies. But it doesn’t have the savvy to pick winners and losers. Instead, a more efficient use of capital comes from knowledgeable and discerning venture capitalists. Most startups are meant to fail after all.

In the 2014 article “Why China Can’t Innovate” for HBR, Kirby and co-authors Regina Abrami and Warren McFarlan noted that the Chinese Communist Party requires every company of more than 50 employees to have one of the Party’s representatives on-site. Larger firms must have a Party cell, whose leader reports directly to the Party at the municipal or provincial level.

“These requirements compromise the proprietary nature of a firm’s strategic direction, operations, and competitive advantage, thus constraining normal competitive behavior, not to mention the incentives that drive founders to grow their own businesses,” they wrote.

The system of “parallel governance” constrains the flow of ideas. China’s innovation largely comes through “creative adaptation,” which can mean a lot of things, including foreign acquisitions and partnerships—as well as cybertheft.

Communism is against private ownership of property. This puts a damper on innovation.

“The key to whether China can become a country of innovation is tied to the respect of property rights and the rule of law,” wrote Ma Guangyuan, an independent economist in China.

In his blog, Ma cites renowned U.S. investor William Bernstein’s writings, which discuss property rights as being the most important of four factors needed for rapid economic growth. Guangyang wrote, “Entrepreneurs live in constant fear of punishment,” due to the questionable business practices in China, an environment that leads them to lose trust in a viable long-term economic future.

Capital flight out of China is one symptom of the problem; another is the preference of wealthy Chinese to send their children overseas for higher education. The loss of Chinese entrepreneurs like Li Ka-shing and Cao Dewang is a sign that greener pastures lie abroad.

Former world chess champion and Russian political activist Garry Kasparov wrote in an opinion piece for Reuters: “Communism as a political ideology is as bankrupt as ever.”

In a speech at Westminster College on April 9, 2016, Kasparov said: “It is no coincidence that the values of the American century are also the values of innovation and exploration. Individual freedom, risk-taking, investment, opportunity, ambition, and sacrifice. Religious and secular dictatorships cannot compete with these values, and so they attack the systems founded upon them.”

Kirby, Abrami, and McFarlan recognize the nearly limitless capability of the Chinese individual, but say the political environment in China acts like a choke collar on innovation.

“The problem, we think, is not the innovative or intellectual capacity of the Chinese people, which is boundless, but the political world in which their schools, universities, and businesses need to operate, which is very much bounded,” they wrote.