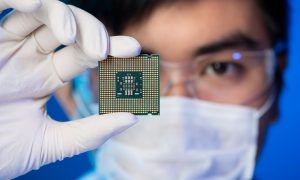 A woman looks through a magnifier to see a 2GB RAM from a notebook during the semi-tech show in Taipei on May 10, 2007. (Sam Yeh/AFP/Getty Images)
Chinese Regime

Recent media reports say China is proposing to boost imports of U.S. semiconductors to $200 billion in the coming years, as part of negotiations in the ongoing trade dispute with the United States.

The Wall Street Journal reports that this would be a five-fold increase from current numbers.

Semiconductor chips, which power almost every electronic device, are already one of China’s largest import categories by value.

The semiconductor purchase proposal highlights a reality in China: Beijing continues to lag in terms of domestic manufacturing of the most advanced semiconductors, despite the state’s heavy investments.

However, Beijing is closing the technology gap fast, because of a push to lure away Taiwanese engineers to work for Chinese chipmakers.

“Chinese companies are offering two to three times [Taiwanese engineers’] current salaries to work for them,” said an unnamed Taiwanese engineer in a recent interview with Japanese media Nikkei.

Taiwan is home to some of the world’s most advanced semiconductor factories, most notably, the world’s largest contract chipmaker, Taiwan Semiconductor Manufacturing Co. (TSMC).

In August 2018, Taiwan’s Central News Agency reported that Nanya Technology, a Taiwanese maker of DRAM chips, lost 48 of its senior experts to China in less than two years. DRAMs are semiconductor memory chips within digital products that store data.

Inotera Memories, another Taiwanese DRAM maker, saw 400 of its employees leave for China after the company was acquired by U.S. tech company Micron in 2016.

In a July 2018 article that cited unidentified headhunting companies, Taiwan’s leading financial publication Business Weekly estimated that there are about 2,000 Taiwanese employees at Chinese semiconductor companies in mainland China. Another 1,000 Taiwanese work at the Taiwan branch offices of Chinese companies.

In August 2018, two chip industry promotion agencies run by China’s Ministry of Industry and Information Technology jointly published a white paper on talent recruitment goals. The paper pointed out that to sustain China’s desired industry growth, by 2020, the country would need a total of 720,000 IC (integrated circuit, the term for placing electronic components onto semiconductors) qualified workers. The shortage would amount to 400,000, given that there were only 320,000 well-versed workers at the end of 2017, and less than 30,000 Chinese graduates enter the IC sector every year.

The paper called for more efforts in recruiting top IC experts from overseas, as well as offering more financial incentives such as stock options and other bonuses.

Different city governments also have their own recruitment packages.

For example, the Quanzhou municipal government, located in southern China’s Fujian Province, offers a stipend program for workers in the city’s IC sector. Companies could nominate candidates to this program. If the candidate is approved by the government, he or she would receive 1,200 yuan ($178) per month to compensate living expenses if their monthly salary falls in the range of 2,001 to 16,000 yuan ($1,786 to $2,381). For a monthly salary higher than 16,001 yuan, the person would receive a monthly stipend of 1,600 yuan ($238).

The Hefei municipal government, located in eastern China’s Anhui Province, also provides stipends for living expenses, periodic disbursements of 50,000 to 100,000 ($7,440 to $14,882), to approved talents who work in the city’s IC sector. The stipend program lasts for three years.

Meanwhile, the Kunshan municipal government, located in southeastern Jiangsu Province, encourages local banks to provide loans to Taiwanese tech companies investing in the city. The government would partially shoulder financial losses incurred should the Taiwanese firms be unable to repay the loans.

One of the most high-profile Taiwanese semiconductor talents ever recruited by China is Liang Mong-song.

Liang was a senior director in research and development at TSMC, where he worked for 17 years before leaving the company in February 2009. He then taught at the electrical engineering department of Taiwan’s Tsing Hua University for six months, before moving on to a teaching post at South Korea’s Sungkyunkwan University.

According to Taiwan’s leading financial magazine CommonWealth, Liang was poached by Samsung and became chief technology officer at the South Korean tech giant’s LSI division in 2011. LSI, or large-scale integration, is a key process to making semiconductors, which involves putting together thousands of transistors onto a single microchip.

Because of Liang’s expertise, Samsung was able to beat TSMC in developing the 16-nanometer (nm) and 14-nm chip-making technology, according to CommonWealth.

As chips reduce in size on the nanometer scale, they become more powerful and advanced.

Then, in October 2017, Semiconductor Manufacturing International Corporation (SMIC), a state-backed semiconductor foundry headquartered in Shanghai, announced that Liang had been appointed the company’s co-chief executive officer. According to multiple Chinese news sites, Liang earned a yearly salary of roughly $200,000 after taxes.

In a June 2018 report, Taiwanese news site TechNews noticed two significant changes at SMIC after Liang joined the Chinese foundry. First, SMIC’s yield rate—the rate at which semiconductors are successfully produced—for its 28-nm chips significantly improved. Second, SMIC announced that it had made a major breakthrough in improving the yield rate for the 14-nm process.

According to TechNews, citing unidentified sources, Liang persuaded his former Taiwanese and South Korean colleagues to work at SMIC, which made the 14-nm breakthrough possible.

Taiwanese media reported that SMIC is set to start mass production of its 14-nm process technology this year—a first for China’s chip-making industry.

Despite SMIC’s recent advancements, TSMC continues to lead the technology race: It will be the sole manufacturer of Apple’s A13 chips, which will power the U.S. giant’s 2019 iPhones, according to Taiwanese daily newspaper DigiTimes. Last year’s Apple iPhones contain A12 processors made by TSMC’s 7-nm process.

Last year, two former TSMC employees, one surnamed Wu and another with the name of Zhao, were charged by Taiwanese prosecutors for allegedly trying to transfer trade secrets for the intention of providing them to their future Chinese employers, both chip-making firms.