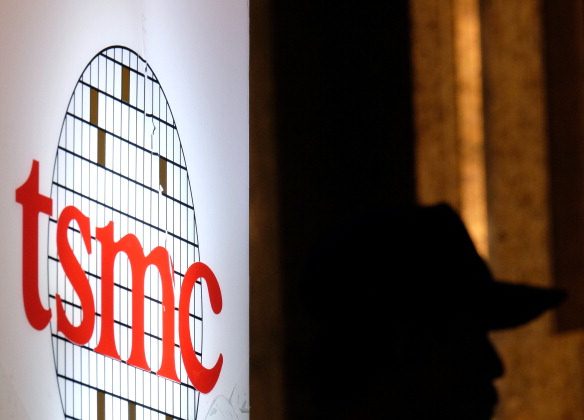 A security staff stands next to a logo of the Taiwan Semiconductor Manufacturing Corp., during the investors conference in Taipei on July 16, 2014. (Sam Yeh/AFP/Getty Images)
Chinese Regime

A former employee of Taiwan Semiconductor Manufacturing Corp. (TSMC), the world’s largest contract chipmaker, has been charged with breach of trust and theft of trade secrets, with the intention of providing them to a mainland Chinese firm, according to an Aug. 30 report by Taiwanese newspaper the Liberty Times.

The charges were filed by district prosecutors in Hsinchu, a city in northern Taiwan where the country’s largest science park is located. The case brings renewed light on China’s ambition to acquire semiconductor technology by any means necessary.

The former staffer, identified only by his surname Zhao, began working for TSMC in 2007 as an engineer in charge of a metal gate manufacturing process, one of the key production steps in building semiconductor integrated circuit (IC) chips. He oversaw the process for three different generations of process technology: 20 nanometers (nm), 10 nm, and 5 nm.

The chips are key to powering practically every kind of electronic device. As they become smaller in size, they deliver more performance-per-watt, meaning that they run at a faster speed while consuming less power.

In 2016, Zhao was an assistant manager in charge of research and development of the 5-nm metal thin film deposition, a key step in the IC chip production. He reached out to a headhunter, who arranged a job interview with Chinese firm Shanghai Huali Microelectronics, also a contract chipmaker, for a senior executive position in Huali’s metal gate manufacturing department.

TSMC finally caught on after Zhao resigned in January 2017.

China, while being the world’s largest consumer of semiconductors, continues to lag in technology when compared to traditional semiconductor powerhouses, such as South Korea, Japan, Taiwan, and the United States. Thus, it relies heavily on imports to meet its domestic demand. In 2017, China imported ICs worth about $260 billion, according to data from trade organization China Semiconductor Industry Association (CSIA).

In seeking to narrow the technology gap, one of Beijing’s tactics is recruiting Taiwanese semiconductor talents.

According to a July 5 article by Taiwan’s leading financial publication Business Weekly, which cited data from unidentified headhunting companies and estimates by semiconductor experts, there are about 2,000 Taiwanese staffers at Chinese semiconductor companies in mainland China. Additionally, there are about another 1,000 Taiwanese working at the Taiwan branch offices of Chinese companies.

Most of these 3,000 Taiwanese talents either hold senior positions or are research and development staff, according to Business Weekly.

Zhao isn’t the only semiconductor engineer who has been apprehended by authorities in Taiwan this year.

In April, another former TSMC employee, identified only by his surname Wu, was also arrested on the same charges by Hsinchu prosecutors. Wu had planned to take documents related to TSMC’s 28-nm technology to his new job at CSMC Technologies, a contract chipmaker located in Wuxi City in China’s Jiangsu Province, to reproduce the proprietary technology.

According to Taiwanese newspaper China Times, Wu was sentenced to one year and six months in prison, with a reprieve of four years.