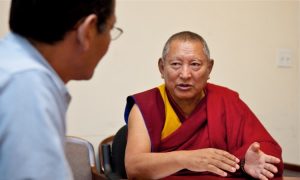 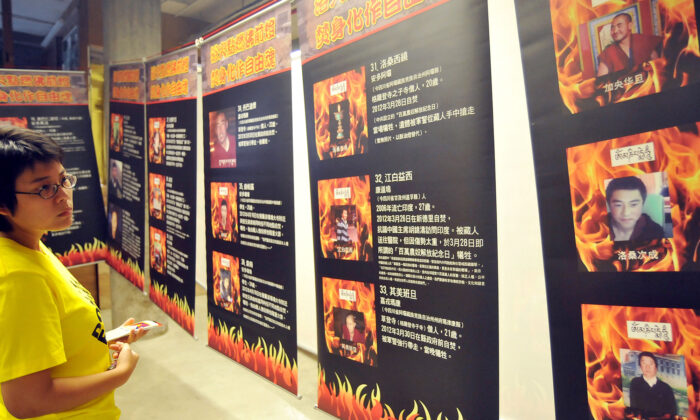 How China Handled Two Self-Immolation Incidents: One Broadcasted, One Censored

In an era where it is hard to discern fake news from factual reporting, it is the common man who tends to suffer the most. In some cases, it is a country’s government that decides how a piece of news is presented to its citizens. Below are two such cases of self-immolation incidents—one real and another a hoax—that were handled very differently by the Chinese communist regime.

Ever since Tapey, a Tibetan monk in his 20s, first set himself on fire on Feb. 27, 2009, to protest against the years of repression from the Chinese regime, more than 150 Tibetans, including monks and nuns, were known to have followed suit, as per the International Campaign for Tibet. Many believed that the Chinese regime’s forced “reform” had caused this desperate act of protest.

Dhondup Tashi Rekjong, a Tibetan writer and editor of Karkhung newspaper, told VOA News in 2013 that since 1959, the Chinese regime has “attempted systematic destruction and annihilation of Tibetan culture, religion, politics and so forth.”

“All these have accumulated as causes for the Tibetan self-immolations,” he continued.

Lobsang Sangay, the president of the Tibetan government in exile in India, echoed similar sentiments. He told Free Tibet in 2011 that “The incidents are a clear indication of the genuine grievances of the Tibetans and their sense of deep resentment and despair over the prevailing conditions in Tibet.”

Despite the number of Tibetans who had set themselves on fire, the Chinese regime denied any self-immolation cases.

“None of the 46,000 monks and nuns in Tibet’s 1,700-plus monasteries, nor any local residents, have self-immolated,” said Padma Choling, then-chairman of the Standing Committee of the People’s Congress of the Tibet Autonomous Region (TAR), TIME reported in 2014.

The Chinese regime also scrambled to cover up the news and prevent it from getting out to the world. Those found to have delivered the news faced dire consequences.

Lobsang Thinley, a Tibetan, was arrested and tortured for sharing a firsthand account of witnessing a monk self-immolating himself in 2011 to his friends in India. He was first arbitrarily detained for one and a half years and then later sentenced to three years in prison on charges of “leaking state secrets,” as per what he said to the Tibetan Centre for Human Rights and Democracy (TCHRD) (pdf) in 2017 after fleeing to India.

Family and friends of Tibetans who tried to share self-immolation accounts were also targeted by the Chinese regime.

Tsangyang Gyatso, president of the Jonang Welfare Association, was born and raised in Tibet but now lives in India. He told TCHRD that after he exposed his identity and informed the world of the self-immolations that were happening in Tibet, having received the information from Tibetans in Tibet, his family had to deal with repercussions.

After the Chinese regime’s state media, Qinghai TV, aired a program naming Tsangyang as one of the instigators of self-immolation protests, his siblings were interrogated several times by the authorities.

“Both of them were subjected to long hours of interrogation to obtain information about my background and what I did in India,” he recalled. “My family members were kept under constant watch.”

Here the Chinese Communist Party (CCP) was trying to keep the Tibetans self-immolation incidents under wraps but on the other hand had no qualms in broadcasting another self-immolation instance widely to the world.

On Jan. 23, 2001, as many people in China were busy preparing for the arrival of the Chinese Lunar New Year, the state media reported that five individuals who were reported to be Falun Gong practitioners had set themselves on fire in Tiananmen Square in Beijing.

First introduced to China in 1992, Falun Gong, also known as Falun Dafa, is a mind-body practice rooted in Buddhist traditions. The practice consists of five sets of meditative exercises based on the principles of Truthfulness, Compassion, and Forbearance. As many as 70 million people took up the practice after recognizing the health benefits of it as well as improving the morality of society. However, due to the sheer number of people practicing it, the Chinese regime launched a crackdown on the practice in July 1999. Many practitioners were arrested, detained, and tortured.

Initially, after the persecution started, many Chinese citizens were sympathetic towards the persecution of Falun Gong. However, people became enraged with the practice after the self-immolation incident was broadcast. However, it was not only the Chinese who were aware of this, but western media outlets also reported on the self-immolation incident.

The Tiananmen Square Self-Immolation Was Staged

Shortly afterward, evidence on the self-immolation being staged by the Chinese regime started surfacing, such as the number of self-immolators going from five in the original reports to seven people a week later. A report by The Washington Post on Feb. 4, 2001, stated that the neighbors of two of the alleged self-immolators, namely Liu Chunling, who died from the incident, and her 12-year-old daughter, Liu Siying, who died a few weeks later, had never been seen practicing Falun Gong.

The neighbor went on to explain that there was something strange about Liu Chunling, who was working at a night club, as she would hit her child and would drive her elderly mother away. However, her behavior contradicted what Falun Gong teaches its adherents, namely, the principles of Truthfulness, Compassion, and Forbearance. The Washington Post report also mentioned that only state media were allowed to interview survivors and interact with their relatives.

The Chinese media also reported that the close-up footage of the incident came from CNN, a claim denied by the media outlet. Eason Jordan, a then-CNN-chief-news-executive, told the Washington Post that the footage used in the Chinese television reports couldn’t have been obtained from CNN videotape as their cameraman was arrested almost immediately after the incident began.

Another piece of evidence showed one of the self-immolators, named Wang Jindong, had his hair still intact when hair is the first thing to burn in a fire incident. In addition, it was stated that Wang used a sprite plastic bottle filled with gasoline to set himself on fire, but the bottle between his legs remained untouched and did not melt.

The incident was later analyzed and made into a documentary called “False Fire,” which won an honorary award at the 51st Columbia International Film Festival for exposure of the tragic event in November 2003.

The Epoch Times also reported that according to Sun Yanjun, who was an associate professor of psychology at Capital Normal University at that time, China’s state media “quieted down” after NTD, a sister media of this publication under the Epoch Media Group, broadcast the documentary.