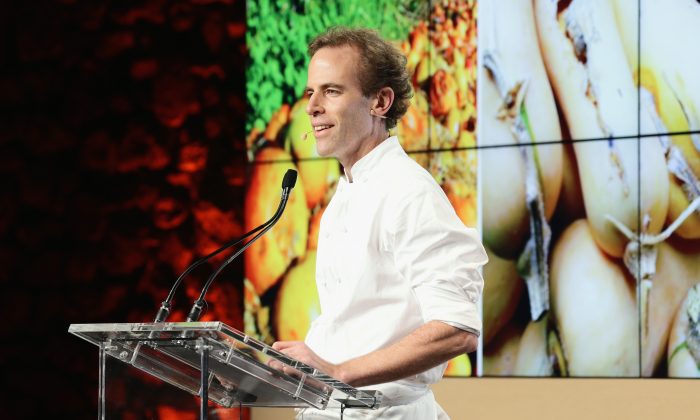 It is a travesty that we live with every day, and it’s one of our own making. We’ve been engaged in it in earnest for the last 50 years. Thankfully, we are now becoming more aware of the problem.

The average American family ends up throwing away 25 percent of the food they purchased at grocery stores, restaurants, or farmers markets.

When we take into account the entire food chain—the farmers, processors, distributors, grocers, and institutional users—the amount we waste is more like 40 percent, with an associated yearly economic loss of $161 billion, according to the Environmental Protection Agency (EPA).

There are plenty of factors that conspired against us to create this culture of waste.

For one, the marvel that is our modern, highly processed food industry has brought down the cost of food to just 6 percent of the average family’s household expenditure, according to data collected by the Bill and Melinda Gates Foundation. This is less than in any other country. In France, that number is 14 percent, in Brazil it’s 25 percent, and in India 35 percent.

This doesn’t give anyone much incentive to care about using up leftovers, or finding ways to use those shriveled carrots and that wilted Swiss chard languishing in the crisper. Just buy more.

We don’t really want to live like this. It wasn’t always this way either.

We can also blame increased restaurant portion sizes, busy lifestyles with less time to plan and cook, and marketing that encourages us to buy in bulk or experiment with unusual ingredients we may never use up.

However, there is hope in the fact that most of us don’t want to leave our leftovers until they smell or grow mold then have to toss them out. We don’t really want to waste like this. It wasn’t always this way either.

Author and associate professor of history at Michigan State University, Helen Veit surveyed changing attitudes toward leftovers reflected in successive versions of “The Joy of Cooking.” In 1931, the venerable cookbook contained a careful inventory of all the recipes that could easily incorporate leftovers, but in the early 1950s, author Irma Rombauer cautioned that too much budget-minded cooking could incite “family protest.” And by the 1960s, leftovers had become a joke, and the adage “when in doubt, throw it out,” was welcome advice.

As Veit wrote in The Atlantic, in the 19th century, “using up leftover food was so fundamental to everyday cooking and eating that most people didn’t have a special name for it,” and “techniques like pickling, potting, smoking, and salting defined 19th-century cuisine because, before reliable refrigeration, cooking and food preservation were barely distinguishable tasks.”

We cherry-pick the best parts, but for most of human history that isn’t the way that people have eaten.
— Adam Kaye, culinary director, Blue Hill at Stone Barns

Adam Kaye, culinary director at Blue Hill at Stone Barns in Pocantico Hills, New York, said it is well-documented that as a culture we tend to be wasteful. “We cherry-pick the best parts, but for most of human history that isn’t the way that people have eaten.”

He points to old French peasant dishes like bouillabaisse, a fish stew that was made by Marseille fishermen using bony rockfish, which they were unable to sell to restaurants or markets. Or coq au vin, a dish popularized by Julia Child, made of tough chicken braised with wine, pork fat, and mushrooms to render it tender and flavorful.

Closer to home, we may also recall our grandmothers making casserole or omelette surprise, homemade soup stocks, slow-cooker meals, and sandwiches filled with meatloaf and other leftovers from the previous night’s dinner.

The project was aptly named wastED. It aimed not only to revive awareness about thrifty cooking in New York, but more importantly to remind people that what we may think is garbage can taste delicious.

It was an exercise in possibilities, and of tremendous education across the restaurant’s ecosystem of vendors and friends. Their first order of business was to approach their suppliers, and tap their suppliers’ suppliers for potential ingredients. What were they throwing out that Blue Hill could use?

After the “waste audit,” they had an “extensive waste vendor list” and a “new palate of ingredients,” according to Kaye, who recalled that for some vendors it was like a therapy session. “They were so relieved that someone was finally asking us about this stuff.”

Chefs are a natural choice to raise awareness about waste.

The event, which sold plates for $15 each, featured contributions from 68 vendors and 27 chefs. They ended up with a “dumpster dive” salad, a vegetarian burger made with juice pulp and garnished with pickle butts, a carpaccio of pineapple cores as dessert, and much more.

They also had customers lining up down the block. The public loved it, and many a curious chef and working foodie stopped by to check out the unique menu.

According to Kaye, chefs are a natural choice to raise awareness about waste. “If your business is to provide sustenance and pleasure through your food, you would be averse to waste,” he said.

Barber, who tasked Kaye with the pop-up project, has long been an advocate for a more sustainable food system. His book “The Third Plate,” is a compassionate and informative journey across landscapes shaped by the choices we make about what to put on our plates. He sees the role of the chef as being able to literally guide food culture.

In an interview with the Guardian, Barber said America’s wasteful culture is an anomaly. In researching his book, he found that in “all these great cuisines of the world, the purpose of the pattern of eating that inculcated itself in the everyday food culture was soaking up waste! You create dishes out of it. Food isn’t wasted; it’s bled into the culture through cooking and through cuisine.”

He said the incredible productivity of American soils is part of the historical problem. “We’ve never been forced into the kind of negotiation where we develop dishes that take full advantage of what the landscape can provide.”

This may explain why Americans are generally unwilling to buy food items that are less than perfect. We pick through the green beans for our favorites, squeeze the nectarines, avoid cauliflower with brown on it, and generally seek out only what is freshest.

In 2012, when some of the Food Network chefs took on a 48-hour challenge to create a multicourse meal for 100 people using only wasted food scavenged from New York City retailers, the bounty of free waste their online videos revealed was shocking.

After people realize it’s food and not trash, the work is in changing the way our businesses and supply chains work.

Bobby Flay, Alex Guarnaschelli, Michael Symon, and Anne Burrell discovered cups of excess cocoa powder and prosciutto rinds from a local bakery, piles of mildly blemished produce and ricotta one day past expiry from a grocer, 45 humanely slaughtered chickens with defects like a broken wing that prevented their sale, 80 pounds of fish that were the spoils of a single day from a local distributor, meat-flecked beef bones, and piles of blemished or misshapen peaches and tomatoes left on the earth to rot from local farms.

Awareness is growing, and changes are happening. Kaye said verbatim or versions of the wastED menu have become mainstay offerings at Blue Hill, and that they have in mind a new season to exercise what they learned doing wastED. No word yet on whether they’ll do the pop-up again, but they did serve garbage to 40 heads of state at a U.N. working lunch last October.

Kaye also said he gets inquiries all the time from folks local and abroad who seek advice on how to put waste to use.

But wait, how do we get our hands on that waste out of a system that is set up to dump into landfills the 133 billion pounds of uneaten organic matter we produce each year?

After people realize it’s food and not trash, the work is in changing the way our businesses and supply chains work, said Kaye.

“After the paradigm shift, then it’s just a logistics issue.”