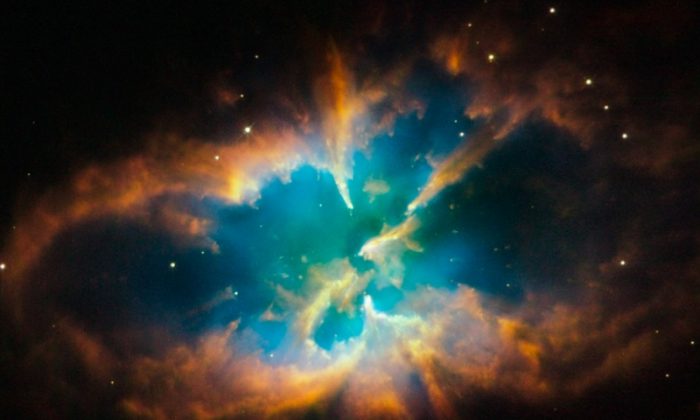 NGC 2818 is a beautiful planetary nebula, the gaseous shroud of a dying sun-like star. It could well offer a glimpse of the future that awaits our own Sun after spending another 5 billion years or so steadily using up hydrogen at its core, and then finally helium, as fuel for nuclear fusion. (NASA, ESA, Hubble Heritage Team, STScI / AURA)
Photo Gallery

How Can Death Be So Beautiful?

This is how stars die ...
By Tara MacIsaac

1. The core runs out of hydrogen fuel, contracts, heats up.
2. The outer layer expands and the star becomes what we call a “red giant.”
3. Heat at the core causes helium to fuse into carbon.
4. The helium is used up, the core cools and expands.
5. Material is ejected, forming the spectacular nebula around the dying star.
6. As the core cools, it becomes a white dwarf, then a black dwarf.

Steps in the Death of Stars Much Larger Than Our Sun

The first three steps are the same as for stars the size of our sun, but then …
4. Carbon is fused into heavier elements, such a oxygen, silicon, iron, and more, because the mass is greater.
5. The core turns to iron and no longer burns.
6. The star collapses and the iron core heats drastically.
7. Protons and electrons merge to form neutrons.
8. This is the most amazing part: Craig Freudenrich, a free-lance science writer, explains in a How Stuff Works article: “In less than a second, the iron core, which is about the size of the Earth, shrinks to a neutron core with a radius of about 6 miles (10 kilometers).”
10. The core eventually explodes under heat and the pressure of collapse, forming a supernova.
11. The remains can form a neutron star or a black hole.