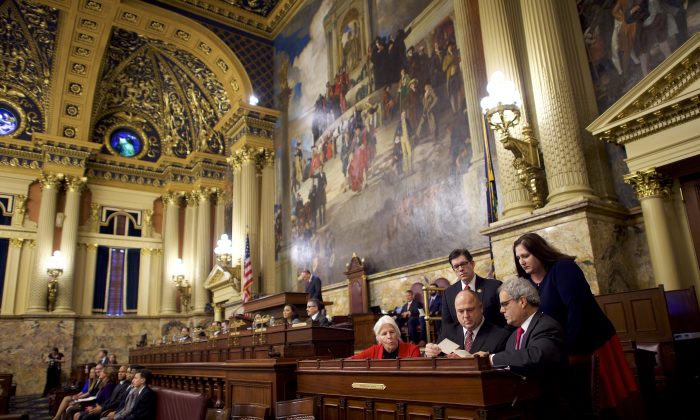 (R) Charlie Gerow and fellow tellers count the elector's votes from a ballot box in the House of Representatives chamber of the Pennsylvania Capitol Building December 19, 2016 in Harrisburg, Pennsylvania. Mark Makela/Getty Images
Viewpoints

These electors, in turn, vote the following month for president and vice president.

The Constitution grants the electors their sole power and function: to assemble in their respective state capitals to cast ballots for president and vice president. After doing so, they disperse permanently. The entire group never meets in the same place.

To win a presidential or vice presidential election, a candidate must receive an absolute majority of electoral votes—currently 270.

Sometimes, although rarely, the electors split among multiple candidates, so no candidate wins an absolute majority. Consider this hypothetical election:

Candidate A has won a 37 percent plurality—that is, he received more ballots than any other person. But no one has garnered an absolute majority (50 percent plus one). So the Constitution mandates a run-off election in the House of Representatives. The representatives choose among the top three candidates, voting by state delegation (one state/one vote). At least two-thirds of state delegations must be present, and election requires a majority of states (26 of 50).

Similarly, if no candidate for vice president garners an Electoral College majority, the Senate holds a run-off among the top two vote-getters. Two-thirds of all senators must participate, and election requires a majority of all senators (51 of 100).

The majority requirements in the Electoral College and in the run-off elections ensure that our top two officeholders enjoy broad national support.

The Constitution’s framers devoted much attention to how the president and vice president are chosen. They considered many methods—among them direct popular vote, election by Congress, and election by state governors.

Some writers claim the framers adopted an indirect election procedure because they didn’t trust democracy. This is an oversimplification. The framers balanced many factors:

• Enabling the president to make decisions independently of Congress or the states.

• Ensuring the president represents the nation as a whole rather than merely some sections.

• Ensuring that even if the president is not the most popular person in the country, he has enough support to govern.

• Ensuring that election is free from foreign dictates, mob behavior, and excessive influence from special interests.

• Ensuring participation by both national and state constituencies.

• Increasing the chances the president is competent to govern.

After being refined by the 12th amendment (1804), this procedure has worked well.

First, it ensures that the president has widespread public support. The popular vote leader wins more than 90 percent of the time, and usually garners an absolute majority. Since the election of 1864—the first time the people voted for electors in every state—even in multi-candidate elections, no successful candidate has received less than 41 percent of the popular vote.

The system also screens out primarily regional candidates, even when they win narrow popular vote pluralities. It frustrates foreign governments’ efforts to influence elections. It forestalls the mob behavior and special interest influence that might occur if electors met in one place. It also preserves the president’s independence from Congress and the states.

Only in one respect has the method of presidential election disappointed: Electors were supposed to be leaders in their respective states, exercising informed discretion. The idea was to ensure the election of competent presidents. However, most states have laws dictating how electors vote. This explains why electors are often mere party hacks and why some recent presidents haven’t been ideally equipped for the job.

Those state laws are probably unconstitutional, and are now under court challenge.

Currently, a group called National Popular Vote (NPV) is promoting a plan to alter the procedure. The group wants state legislatures to make a deal, whereby state voters would no longer choose their own electors. Instead, each state would award its electors to whomever receives a national popular vote plurality.

NPV would impose on the United States the bare plurality-winner method that prevails in Honduras, Mexico, Nicaragua, Panama, Paraguay, the Philippines, and Venezuela.

Experience in those counties shows that the NPV system often results in a candidate winning the presidency even though the overwhelming majority of voters oppose him. For example, in Mexico’s 2006 election, the three leading candidates received 36, 35, and 22 percent of the vote, respectively. The candidate with the 36 percent plurality became president. In the 1992 context in the Philippines, the winner garnered less than 24 percent in an election with seven major candidates. The winner became president despite the opposition of three-quarters of the electorate.

NPV encourages electoral corruption and campaigns by candidates with only regional support.

Interest in NPV has grown because in 2016 Donald Trump won the Electoral College while losing the popular tally 46 percent to 48 percent. However, the procedure worked as intended in 2016, because it screened out a candidate whose support was heavily regional (coastal). Moreover, people complaining that Trump won with only 46 percent should understand that in NPV countries, the winner usually receives a good deal less than that.

NPV also may facilitate the election of would-be dictators. A parliamentary example is Adolph Hitler, who became chancellor of Germany because his Nazi Party won a 33 percent plurality. A presidential example is the 1970 election in Chile, where Salvador Allende, a communist, became president with 37 percent. (Chile subsequently altered its system.) Another presidential example is the 2006 election in Nicaragua, where Marxist Daniel Ortega gained the presidency with 38 percent. He promptly ended honest elections in his country.

This plurality-winner feature is only one of NPV’s many defects. The plan is probably unconstitutional, and it offers great incentives to corruption.

The fact that many Americans have accepted it testifies to the need for better public education about the Constitution and the constitutional system.

Rob Natelson served as a law professor for 25 years at three universities. He taught constitutional law, and is now senior fellow in constitutional jurisprudence at the Independence Institute in Denver. He is the author of numerous books and articles, including “The Original Constitution: What It Actually Said and Meant.”