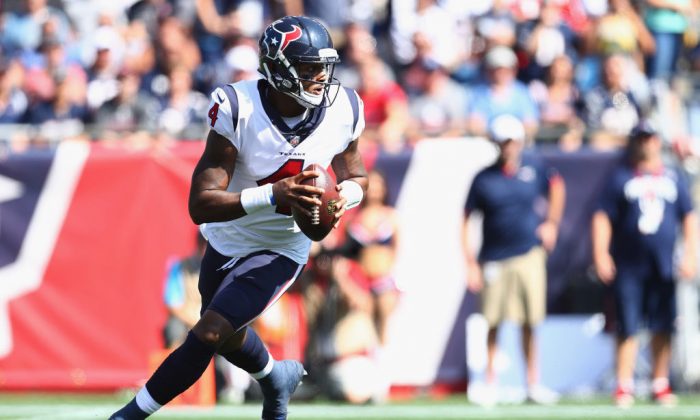 Deshaun Watson of the Houston Texans looks to throw during the first quarter of a game against the New England Patriots at Gillette Stadium n Foxboro, Mass., on Sept. 24, 2017. (Maddie Meyer/Getty Images)
US News

An NFL player is making headlines for his generosity and giving up his paycheck to help Harvey victims.

Houston Texans rookie quarterback Deshaun Watson donated his first NFL paycheck to three cafeteria workers at NRG Stadium in Houston who were victims of Hurricane Harvey, according to a video posted by the team’s official Twitter account.

The three employees lost their cars and homes to the destructive storm that displaced tens of thousands of Texas residents.

“I’m excited to do a little surprise for the cafeteria ladies that’s been helpful for all us,” Watson said in the Twitter video posted on Wednesday, Sept. 27.

Watson walked into the cafeteria carrying envelopes wrapped in ribbons. “For what ya’ll do for us every day, and never complain, I really appreciate y’all,” Watson told the workers. “I wanted to give my first game check to y’all to help y’all out in some type of way.”

“Hopefully, that’s good and that can get you back on your feet. And anything else y’all need, I’m always here to help,” he added.

The employees seemed overwhelmed by Watson’s act of kindness, with one of them crying and hugging Watson, and all of them thanking him for his generosity.

The 22-year-old has a base salary of $465,000 that is paid in 17 game-week installments, according to the Houston Chronicle.

The full video can be seen below.

"If you can, you must."@deshaunwatson​ gave his first @NFL​ game check to help a few familiar faces. #HoustonStrong pic.twitter.com/rwcyGMSRFN

According to ESPN, Watson has also been on the receiving end of kind donations in the past—his family once received a house built by Habitat for Humanity.

“A lot of the people who work so hard for us behind the scenes, especially the people in the cafeteria, I mean, they’re here at 4:30 in the morning,” coach Bill O’Brien told ESPN. “And some of those people in Harvey, they lost everything. A number of our players donated money to help them, and he gave his game check, which is incredible.