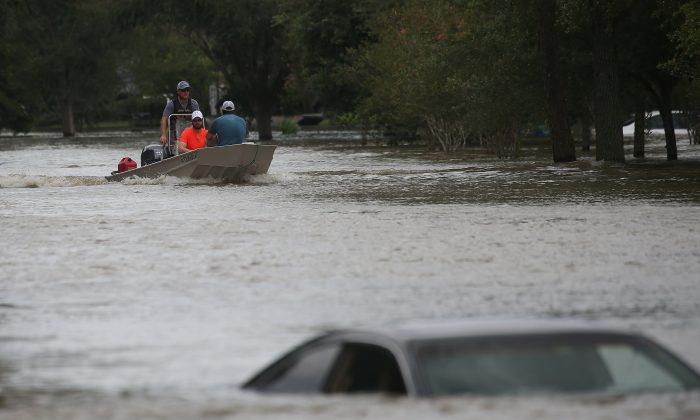 One Houston man’s tragic story may save those who consider driving on flooded streets in the future.

On Wednesday, Aug. 30, the bodies of Sammy Saldivar’s parents and four young nieces and nephews were pulled from Greens Bayou in east Houston. Saldivar is plagued by guilt, his brother Ric Saldivar told local news.

Authorities had tried to warn off Texans who thought to escape the flood by driving out.

The National Weather Service did as well.

But Saldivar’s dad, the now deceased Manuel Saldivar, 84, pushed his son to drive on when the Sammy suggested they turn back.

“I went over it in my head and I would have done the same thing, dad told you to go and you go,” Sammy’s brother Ric told KHOU.

The slogan “Turn Around, don’t drown,” has been promoted in media campaigns and public service announcements but few people realize the danger.

In Hurricane Matthew, 78 percent of all drownings were in a motor vehicle, reports the Centers for Disease Control (CDC).

Most people that drown during floods, drown in their vehicles, according to the CDC.

Vehicles have a deadly combination of buoyancy and leakiness. They float enough to be swept away, but quickly fill with water as they are pushed into deeper areas.

Those inside the vehicle are trapped by water pressure that makes the doors impossible to open. Some panic, forget to take off seatbelts, or waste their one-minute escape time calling 911.

The only way to escape is through a window, but once water reaches a closed window, it can wreck the electronics and the pressure will squeeze it against the door frame, making it also impossible to open.

The only way out at that point is to smash a window, which is very hard to do, or wait for the vehicle to fill with water so the pressure equalizes and the doors can be opened.

That means staying very calm and sucking one last breath of air just as the vehicle fills with water.

For Sammy Saldivar, the hardest part may be the guilt of surviving.

The family lived for decades near the bayou that would eventually claim many of their lives. Sammy moved back to his parent’s home a couple months ago to care for this parents, who were both suffering dementia, reported the Washington Post.

Their five sons grew up in the neighborhood and had hoped to keep their parents out of a home as they slowly lost themselves to the disease.

When the flood warnings began, they made a plan for Sammy to drive them over to brother Ric’s home if the Bayou rose. He was going to stay up overnight to watch, but fell asleep. By the time he awoke, the water was already well past the danger level.

Sammy had wanted to turn back when the van came to a flooded bridge, his brother Ric told the Post.

But his Dad pushed him on. They made it across the flooded bridge, but when the road dipped on the other side, the van’s wheels were lifted off the road.

The vehicle bobbed and when Sammy’s father told him to try accelerating, the van spun off the pavement and into the bayou.

Sammy managed to get out from his half-opened window but could not open the door.

“He could hear the kids screaming but couldn’t push the doors open. That’s what he keeps hearing in his head. And the van just went underwater and was gone,” Ric told the Post.

It took three days for the waters to recede enough for the bodies to be recovered on Wednesday.