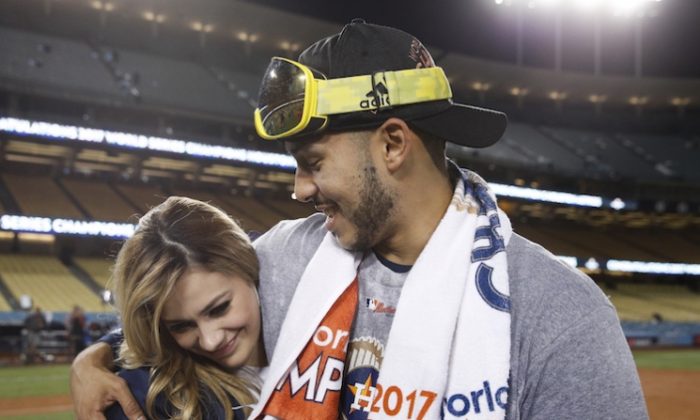 The Astros beat the Dodgers in Los Angeles 5-1 in Game 7 of the World Series. Correa got down on one knee and offered a ring to Daniella Rodriguez, Miss Texas USA 2016.

“Daniella Rodriguez, will you make me the happiest man in the world?” Correa asked. “Will you marry me?”

Rodriguez broke down in tears and said yes. The couple then hugged and kissed on live television.

Carlos Correa with the greatest marriage proposal ever! https://t.co/zTIm57jdTS

With three outs to go in the game, Correa asked one of the clubhouse attendants to bring him the engagement ring in case the Astros win, ESPN reported.

“One of the clubbies, I talked to him in the ninth inning, and I’m like, ‘I don’t want to jinx anything, but if we get the three outs, please bring me the ring because I am going to get engaged in the ballpark,'” Correa said.

Correa explained that he’s been planning the engagement proposal for some time.

“I was planning if we were World Series champions, I was going to do it right there,” Correa said. “I don’t think that’s a stage you can create; it just has to happen. And we were able to win tonight, so perfect timing for me to get engaged,” he said.

“I’ve been thinking about it for months now, but I was waiting for the perfect opportunity, you know. I knew we had a great team, we could accomplish this, and I wasn’t wrong,” Correa said.

Rodriguez told AP that Correa asked her to be close to him during the on-field interview during the postgame celebrations.

“Then he gets down on one knee and everything else is a blur, I don’t know,” Rodriguez said. “I just started crying. I had no idea about that. Everybody knew besides me.”

While Correa went to the clubhouse to spray champagne, Rodriguez gleefully flashed the huge ring to her fellow Astros wives and girlfriends, including Kate Upton.

Astros third baseman Alex Bregman told Yahoo News that Correa was planning to propose after Game 6, but after the Astros lost he postponed the plans to Game 7.

Correa and Rodriguez are living together in Houston. Correa, the 2015 AL Rookie of the Year, had five homers and 14 RBIs in an outstanding postseason, capped by eight hits in the World Series, including two homers.

The TV proposal brought back memories of Boise State running back Ian Johnson’s surprise on-camera proposal to his girlfriend, Broncos cheerleader Chrissy Popadics, after Boise State’s stunning 43-42 victory over Oklahoma in the Fiesta Bowl on Jan. 1, 2007.