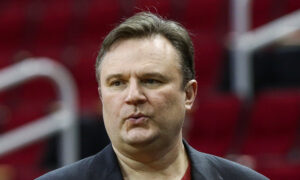 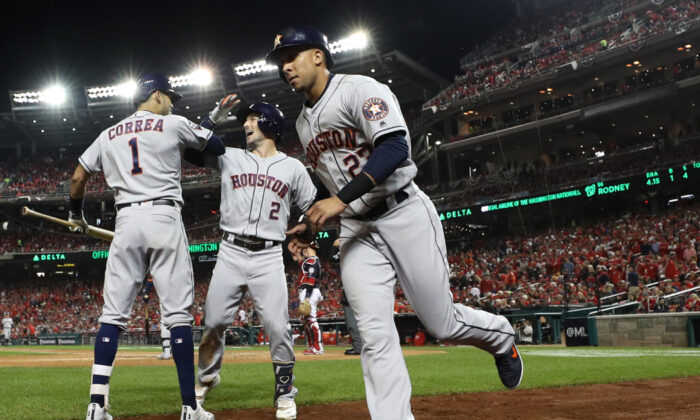 Houston Astros celebrate after hitting a grand slam home run against the Washington Nationals during the seventh inning in Game Four of the 2019 World Series at Nationals Park in Washington, DC on Oct. 26, 2019. (Patrick Smith/Getty Images)
Baseball

According to the publication, the members of the team used a camera in the outfield to steal the signs that catchers flash to pitchers during home games.

Mike Fiers, who pitched with the Astros between 2015 and 2017, and three other anonymous sources, described what happened.

The players said that the Astros had set up a camera in center field that was focused on the opposing catcher’s signs and was connected to a monitor placed on a wall steps from the team’s home dugout at Minute Maid Park, in the tunnel that runs between the dugout and the clubhouse.

Team employees and players would then monitor the screen during the game and attempt to decode signs.

When they believed they had decoded the signs, they would sometimes bang loudly on trash cans to alert as to whether a breaking ball or off-speed pitch was coming.

“That’s not playing the game the right way,” Fiers told the publication. “They were advanced and willing to go above and beyond to win.”

“I just want the game to be cleaned up a little bit because there are guys who are losing their jobs because they’re going in there not knowing. Young guys getting hit around in the first couple of innings starting a game, and then they get sent down. It’s [expletive] on that end. It’s ruining jobs for younger guys,” he said.

Fiers, who also pitched for the Detroit Tigers in 2018, added: “The guys who know are more prepared. But most people don’t. That’s why I told my team. We had a lot of young guys with Detroit trying to make a name and establish themselves. I wanted to help them out and say, ‘Hey, this stuff really does go on. Just be prepared.’”

In a statement on Tuesday, the Astros said they have begun an investigation into the allegations in cooperation with Major League Baseball.

“Regarding the story posted by The Athletic earlier today, the Houston Astros organization has begun an investigation in cooperation with Major League Baseball. It would not be appropriate to comment further on this matter at this time,” the team said.

A statement released by the team said Taubman’s conduct did not reflect the organization’s values “and we believe this is the most appropriate course of action.”

Taubman reportedly yelled at a group of female reporters about closer Roberto Osuna, who was suspended last year for violating MLB’s domestic violence policy before being traded from Toronto to the Astros.

The outburst was “offensive and frightening enough that another Houston staffer apologized,” Sports Illustrated reported.