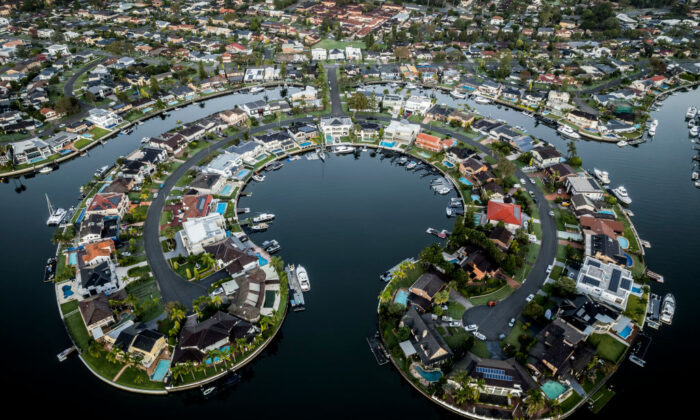 A general view of housing in the southern suburbs in Sydney, Australia, on May 3, 2022. (Brook Mitchell/Getty Images)
Australia

According to real estate data provider CoreLogic, national home values dipped by 1.6 percent to $738,321 (US$500,000) during the month, with the downturn observed in every capital city except Darwin.

Sydney continued to lead the downward trend as its home values slipped by 2.3 percent in August, followed by Brisbane at 1.8 percent and Hobart at 1.7 percent.

“It was only two months ago that the Brisbane housing market peaked after recording a 42.7 percent boom in values,” Lawless said.

“Over the past two months, the market has reversed sharply with values down 1.8 percent in August after a 0.8 percent drop in July.”

While housing markets in regional areas performed better than their urban counterparts, they were still subject to the overall trend.

In particular, regional home values dropped by 1.5 percent in August, with the most significant falls observed in commutable areas booming during the COVID-19 pandemic.

For instance, house prices slid by 4.8 percent across Southern Highlands-Shoalhaven in New South Wales and 4.5 percent across the Sunshine Coast in Queensland over the past three months.

Although housing markets in Australia were softening, dwelling values still stood well above the pre-pandemic levels.

Compared to March 2020, all regions and capitals except Melbourne experienced growth of 15 percent or more.

Lawless anticipated that the downward trend in the housing industry would last throughout 2022 and was likely to continue into 2023, depending on the Reserve Bank of Australia’s (RBA) interest rate decisions.

Since May, the central bank has raised the official cash rate by 1.75 percent to combat growing inflation.

Many economists have expected the RBA to lift the rate by a further 0.5 percent at its September board meeting to cool down the ongoing high demand for goods and services.

“From current levels, interest rates are likely to increase by at least another 75 basis points, and there is a good chance advertised stock levels will accumulate through the spring selling season, providing more choice for buyers and adding further downwards pressure on housing values.”

Meanwhile, housing rent growth has started to slow down, with rental rates increasing by 0.8 percent across the country in August, down from May’s peak of one percent.

This trend was most evident across regional Australia, where the annual rental rate growth dropped from 12.5 percent in November 2021 to 10.1 percent in August 2022.

In addition, CoreLogic said the slowdown was more noticeable in the detached housing sector, where prices were higher for tenants.

“This trend is reversing as tenants become more willing to rent in higher density situations, especially in Sydney and Melbourne where unit rents are now rising at a much faster pace than house rents,” Lawless said.