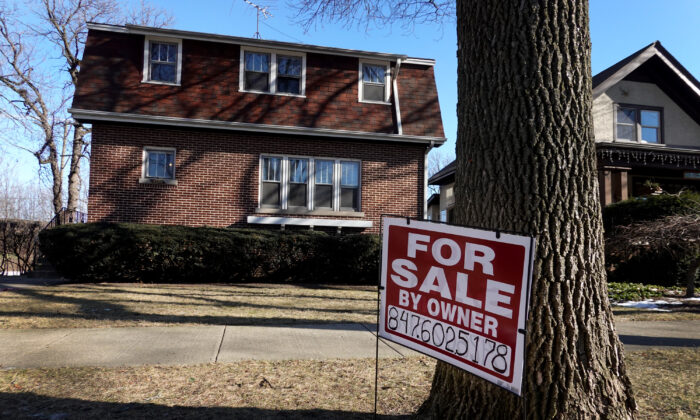 A home is offered for sale by owner in Chicago on Jan. 20, 2022. (Scott Olson/Getty Images)
US Real Estate

Houses for Sale Are Staying on the Market Longer as Bidding Wars Fizzle, Demand Sinks

Houses in the United States are taking longer to sell as bidding wars have decreased and demand has dipped, according to real estate brokerage firm Redfin.

For the four weeks ending on July 17, the typical home was on the market for 19 days before being sold, one day more than the same period in 2021, Redfin said in a July 21 statement. This is the first time in two years that the median time on the market has registered a year-over-year increase.

Despite fewer homes coming onto the market compared to 2021, the total number of homes on sale had the largest increase since August 2019.

“Buyers, who earlier this year had to race to beat the competition, can now take their time touring homes and perhaps even wait to see if sellers drop the price,” Redfin Chief Economist Daryl Fairweather said in the statement. “Still, few homes are being listed, so if your dream house hits the market, you should negotiate hard, now that you have the power to.”

Of the home offers written by Redfin agents in June, 49.9 percent had competing offers. This is the lowest measure since May 2020 and the first time the bidding-war rate has slipped lower than 50 percent since then.

The decline in bidding wars in June was the fifth straight monthly fall. The 49.9 percent rate was also lower than the rate of 65 percent in June 2021, per a July 20 statement.

According to Jenny Dedrick, a Redfin real estate agent in Minneapolis—where the bidding-war rate fell to 45.7 percent in June from 65 percent in June 2021—home showings have “dramatically decreased.”

Homes that had 20 showings in May are now getting just one showing and sometimes none at all, she said.

The housing market is also caught up in an affordability crisis as rising home prices make it tougher for people to buy a house. According to the National Association of Realtors, affordability fell to its lowest level in 16 years in May.

Although home price appreciation has softened in recent months, William Yu, an economist at the University of California–Los Angeles’s Anderson School of Management, told The Epoch Times that he doesn’t expect any drastic fall because of the imbalance in supply and demand.

Yu advised buyers who are waiting for prices to plummet further to not expect too much of a decline.

According to a report released in July by nonprofit Up for Growth, there’s a shortage of 3.8 million homes in the United States, which is twice the deficit compared to 2012.