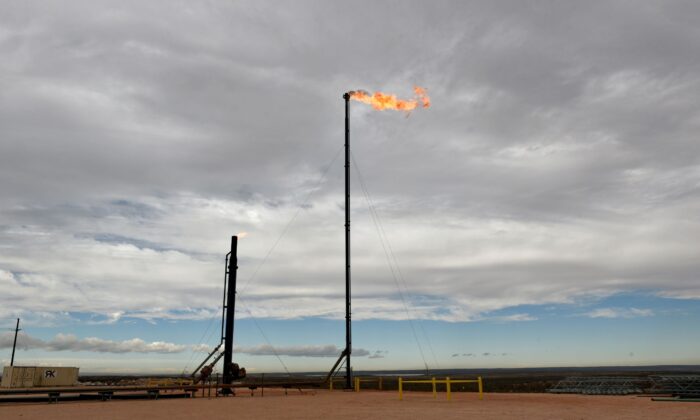 Natural gas flares off at a production facility owned by Exxon near Carlsbad, N.M., on Feb. 11, 2019. (Nick Oxford/Reuters)
By Tom Ozimek

The relentless rise in natural gas prices continued on Oct. 6, highlighting the looming threat to U.S. households bracing for higher heating costs in the event of a harsh winter.

U.S. natural gas futures were up 1.11 percent at $6.312 per million British thermal units (mmBtu) in early trading on Oct. 6 after jumping around 9 percent a day earlier to settle at $6.312 per mmBtu, their highest level since 2008.

While gas prices in Europe and Asia have more than tripled this year, the United States has largely been shielded from the global crunch because of plentiful supplies. While U.S. natural gas is trading around the $6 per mmBTu mark, it’s at around $30-plus in Europe and Asia.

But experts warn the global natural gas crunch could have ripple effects, with possible impacts on households in the United States.

“Storage is low in Europe. Storage is low in Russia because they had cold weather earlier in the year and last winter, so the supplies were not replenished,” Daniel Yergin, vice chairman of IHS Markit, told The Motley Fool in a recent interview.

Natural gas supply shortages have led factories to shut in continental Europe, with reverberations in food production in the United Kingdom.

“There’s so many knock-on effects of what happens when you have, whether you call it an energy crunch or an energy crisis. If we have a cold winter, we’re going to have a difficult time around the world,” Yergin said, building on remarks he made in a mid-September interview on CNBC, in which he warned that “if it’s a cold winter, gas will not just be tight. It will be very tight.”

“It will either be physical shortages, or it will be reflected in price,” he said at the time.

And U.S. natural gas future contracts—known as Henry Hub—have been rallying, with contracts for each of the next five months up over 1 percent in early trading on Oct. 6.

In New England, gas for January delivery is soaring, trading this week at more than $22 at the region’s Algonquin hub. This would be the highest price paid in a month since January and February of 2014.

In September, Goldman Sachs analysts predicted that a colder-than-normal winter in the United States could send Henry Hub natural gas prices past the $10 per mmBtu mark.