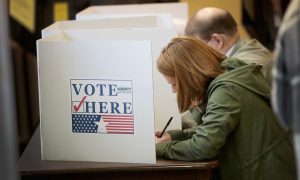 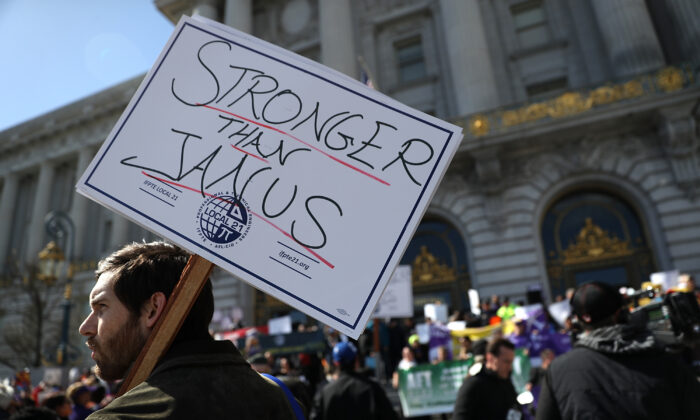 Union members hold signs during a rally outside of San Francisco City Hall on Feb. 26, 2018. (Justin Sullivan/Getty Images)
US News

WASHINGTON—The U.S. House of Representatives will vote this week on a sweeping bill backed by organized labor that would reverse so-called right-to-work laws in 27 states and require non-union workers in unionized professions to pay union dues as a condition of employment.

Democratic lawmakers say the legislation, which is fiercely opposed by business groups like the U.S. Chamber of Commerce, is needed to help workers.

Mark Mix, president of the National Right to Work Committee, which is headquartered in Springfield, Virginia, denounced the measure, which he described as “horrific.”

“I’ll take the AFL-CIO at their word when they said it was a litmus test for gaining their financial support.”

“While the economy is working very well for the wealthy, the well-connected, and the massive corporations—it’s stagnating for everyone else,” House Education and Labor Committee Chairman Bobby Scott (D-Va.) said in a joint statement with Sen. Patty Murray (D-Wash.).

“This inequality, stagnation, and instability for so many is not a natural product of a functioning economy, it is the result of policy choices that have stripped workers of the power to stand together and bargain for fairer wages, benefits and working conditions.”

The pending legislation, known as H.R.2474, the proposed “Protecting the Right to Organize Act,” will go to the House floor Feb. 6 for a vote, Mariel Saez, deputy communications director for House Majority Leader Steny Hoyer (D-Md.), told The Epoch Times.

The measure would amend the National Labor Relations Act, undo states’ right-to-work laws against forced unionization, grant collective-bargaining rights to workers who don’t currently have them, impose new penalties on companies violating labor laws, and undermine the Supreme Court’s landmark 2018 ruling in Janus v. AFSCME, which threw a wrench in how unions finance their operations.

In that decision, the high court held, among other things, that public workers have a constitutionally protected right to refuse to join or subsidize a union. The court also found, to use the words of Justice Samuel Alito, that compelling non-union workers to fork over union dues as an employment condition “violates the free speech rights of nonmembers by compelling them to subsidize private speech on matters of substantial public concern.”

The Teamsters union called the Janus ruling “an attack on working people” orchestrated by “anti-union lawyers and billionaires.” The union recently described the ruling as “an attempt to undercut the ability of public sector workers to join together and negotiate for better pay and benefits on the job.”

“While we still believe the Supreme Court incorrectly ruled in the case and it should be overturned immediately, the Teamsters are proud of how our local unions have responded,” Teamsters General President Jim Hoffa said in June 2019.

The 9th Circuit did give unions a win in December when it ruled that government unions don’t have to refund so-called agency fees to public employees who were forced to pay them before the Supreme Court struck down such mandatory dues as unconstitutional in the Janus decision, as The Epoch Times reported.

As union membership continues a years-long slide in the current strong economy, organized labor is looking for ways to recover lost ground, and H.R.2474 would implement various changes that would make it easier for unions to organize and recruit new members.

It would authorize so-called card-check elections that get rid of secret balloting when a workplace considers whether to unionize. It would also make employers provide union organizers with employee data such as work schedules and contact information.

The legislation is similar to California’s AB5, an expansively pro-union bill that took effect this year. The state law was pushed by organized labor to crack down on the hard-to-unionize so-called gig economy represented by independent truckers and companies such as Uber and Lyft. Freelance writers complain they’ve been thrown out of work as a result of the law, which puts pressure on them to join unions by limiting them to 35 written content submissions per year. Several legal challenges to AB5 are working their way through the courts.

The National Right to Work Committee’s Mix said H.R.2474 should easily pass the Democrat-controlled House but not the Republican-controlled Senate.